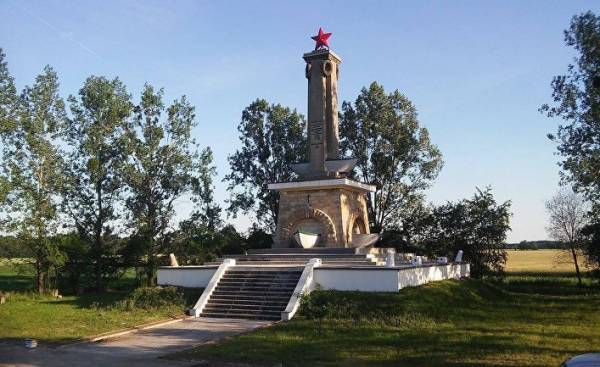 In the village of Mikolin was a solemn opening of the restored monument to the soldiers of the First Ukrainian front of the red army, which at the end of January 1945 died in these places during the crossing of the Oder. The ceremony, which took place June 22, was attended by the Russians, including veterans, the Consul and the military, and two of the Russian TV channel conducted a live broadcast. The monument has been restored thanks to the efforts of the Polish society “Kursk”. The repair required a cracked plate.

Opponents of the monument argue that the process of de-communization should be demolished.

Respect to the memory of

“On the monument there are no prohibited characters. The Council of protection of memory of struggle and martyrdom indicates that the red star is the symbol of the red army, so he can attend the monuments and memorial complexes. For example, one cemetery in Katowice was removed the hammer and sickle, replacing them with a red star. On the monument in Mikolin no emblems, which would prohibit law — explains the head of the society “Kursk” Pow Jerzy (Jerzy Tyc). — Our organization operates with the help of benefactors from Russia and Poland are private individuals and organizations. The restoration of the monument cost about 20 thousand PLN (about 4.8 thousand Euro approx.TRANS.), the costs have been reduced since joined the volunteers who agreed to help us absolutely for free. The restoration took six months,” adds Pow.

Says the head of the society “Kursk”, the residents of the settlements, which are monuments to the soldiers of the red army and their graves, thankful for the restoration. “We will fight for this monument, now we turned into a Warsaw law firm, which will require you to provide us with the interpretation of the question, what does a red star have to do with the propaganda of communism. On this front against fascism fought by representatives of different nationalities, including poles. Now their grandchildren bring flowers to the monument”, — says Pow.

It’s already the 26th a monument to the soldiers of the red army, which were repaired with society “Kursk”. “Can a monument standing in the middle of the field, increase the number of Communists in the country? We are not Communists, we just want to honor the memory of soldiers,” says Pow.

The Institute of national remembrance: the monument should be demolished

In Poland work is under way to amend the law prohibiting the propaganda of communism and other totalitarian regimes. One of its objectives is to clear the public space of Communist symbols.

“This is one of the monuments which have been erected in our country the Communist government. It symbolizes the dominance of the USSR over Poland, thanks for the release and “friendship” between our peoples. It put the Soviet side,” explains the Director of the Bureau of preserving the memory of struggle and martyrdom of the Institute of national remembrance siwek Adam (Adam Siwek).

Another argument in favor of the demolition of the monument is that it does not meet the requirements of the so-called law on Polish language: now there are inscriptions in Russian only. Therefore, as suggested by the Institute, the monument meets the criteria for such facilities to be demolished. The procedure is as follows: to the municipality the prescribed period in which to dismantle a monument, and if he does nothing, the case is referred to the head of the province.

The Governor did not accept the invitation to the ceremony

The head of the opolskie Voivodeship, Adrian Chubak (Adrian Czubak) received an invitation to the opening ceremony of the renovated monument, but did not take part in it. Provincial control was limited by the fact that he had sent to the organizer of the event, that is, to society “Kursk”, the official letter.

The document was signed by Bozena Kalicinski (Bożena Kalecińska) — head of Department for civil Affairs and foreigners. In it she refers to “now debating in Parliament amendments to the law on decommunization” and refers to the “Kursk”: “In connection with the emerging reports that you plan to begin repair other monuments to Soviet soldiers on the territory of Opole province, I urge you to stop further restoration works on the objects in the act are subject to removal”.

“The Governor acts as the representative of the government in the region. The government has been fighting with the symbols of totalitarianism, therefore, the participation of Chewbacca in the ceremony would be meaningless,” — says press Secretary of the head of the opolskie Voivodeship, Martin Kalemba (Martyna Kolemba).