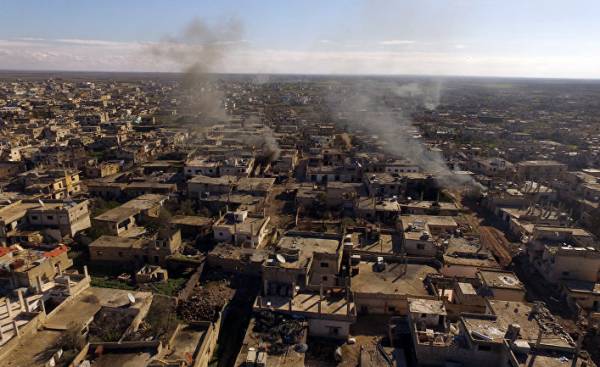 On Thursday, the official channel of the Russian military base Hamim in Syria began a media campaign to support increase support for the regime of Bashar al-Assad, the Russian air forces and militias from Iran on the fields of battle in Daraa. By such actions Russia is trying to exert psychological pressure on the rebels in the area.

In the posts on the page informovala military base Hamim said that recently in a residential area of al-Mahat in the city of Dar controlled by regime forces, took place the meeting of the Russian military leadership with officers from Assad’s army, whose aim was to coordinate military operations in the South of Syria.

It is noted that the meeting had identified both positive and negative factors in the fighting in Dara’a city, and discussed “the search for optimal solutions for the events happening in the area”. In addition, according to the information of this channel, a continuous flow of arms and ammunition for the rebels, coming from the Jordanian-Syrian border. Today it is one of the most serious problems.

Comments for Baladi news, Abu Shayma, the representative of “al-Bunyan al-Marsus” (one and groups representing the armed opposition — approx. ed.), stated: “We do not exclude the increase of Assad’s forces in Dara’a city, and, consequently, the arrival of larger numbers of fighters and mercenaries. In addition, it is possible to gain air support from Russia, especially after the losses suffered by these forces over the past few days. We do not see any difference, will give the Russian aviation support for the Assad regime or refuse this idea, because he currently suffers from of our soldiers.”

Russian statements from the military base Hamim began to arrive after the failed operation forces of the Assad regime, which lasted several weeks in the quarter Channel (the area of the city of Dara’a — approx. ed.). While trying to establish control over the city of Dar Assad’s forces lost a few hundred of the militia, which, in turn, prompted Russia to strengthen air support in this city, in order to capture the border crossing point of Nasib. This plan of the regime of Bashar al-Assad was thwarted by the rebels in one of the military battles that put Russian in a difficult position in front of his ally.