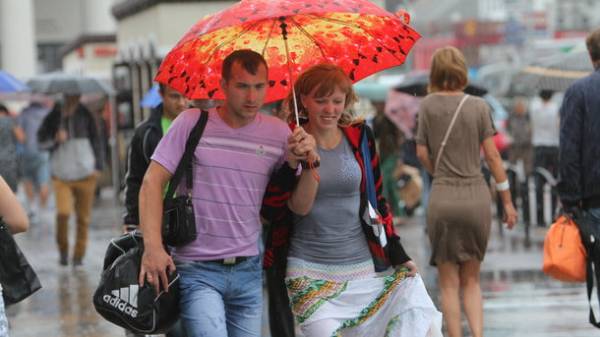 In Ukraine in the next few days expected warming to 33 degrees in the afternoon. Hot weather, according to the meteorology center, will last until at least the end of the week. While in the West and center held strong thunderstorms. The website “Today” found out what weather to wait for the Ukrainians this week.

June 27, thunderstorms will be in the Kharkiv, Poltava, Mykolaiv and Odessa regions. In the rest of this day weather forecasters predict partly cloudy. In the West the temperature will fluctuate in the range of 23-25 degrees above zero in the North and in the centre from 26 to 28, in the East and the South to 33 degrees in the afternoon. 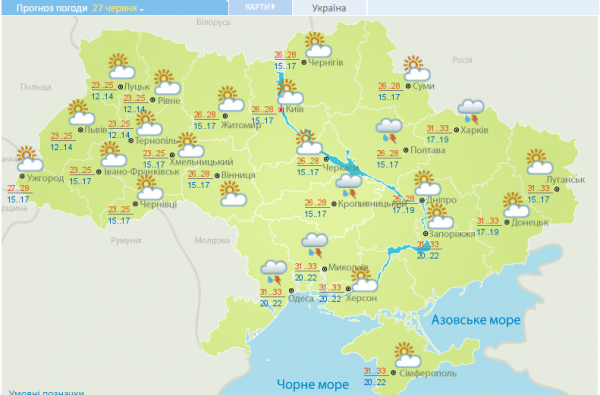 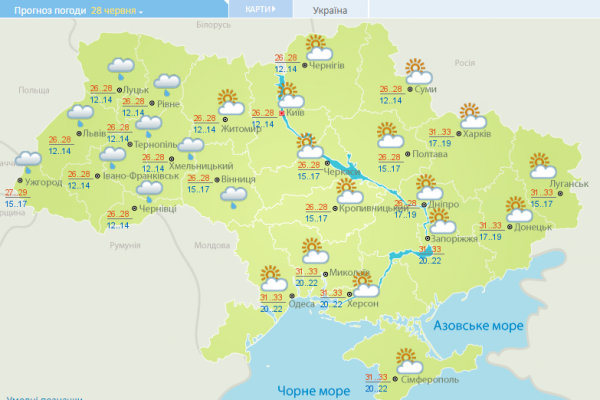 On 29 June the territory of the West and of the North of the country will cover storm cyclone. Rains with thunderstorms are also expected in this day in the capital. At the same time, the temperature rises above 30 degrees Celsius on the territory of Ukraine. In the Kherson region is expected warming up to 34 degrees above zero during the day, in the capital – up to 33 degrees. In the West and in the center – from 31 to 33 degrees on the North and East – 30-33 degrees Celsius. 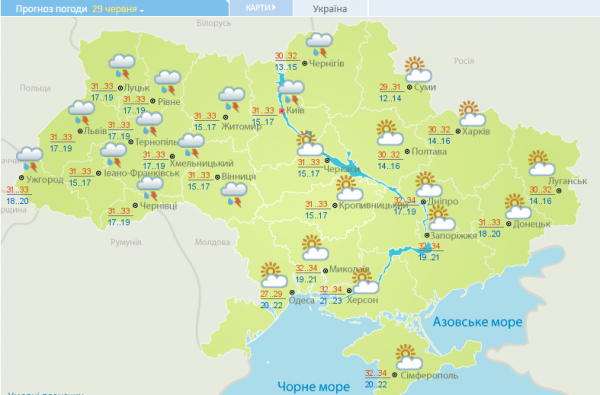 30 June expected hot weather on the territory of Ukraine – from 30 to 34 degrees Celsius. While in the West, in Kiev and in the Chernigov region will be thunderstorms, and the rest of the – partly cloudy.

June 27 is the commemoration day of the Holy prophet Elisha, informs a portal “Weatherman”. Our ancestors were afraid of the rain this day, because he’s promised another seven weeks of bad weather. To predict the weather on this day could the fish: if she plays in the river at night could be a storm.

28 Jun revered the memory of the martyrs of Vita (FITA) and modest. Pray to the Holy modest in case of loss of cattle. The people said that on the Vita the Nightingale falls silent. Our ancestors noticed that “Rain on FITA – bad for gitanes”. To accept, day 28 Jun sun is desirable, as in the case of rainy and inclement weather in the house is a disorder and squabbling. In former times noticed, if the time of sunrise is stuffy to bad weather.

June 29 marks the day of memory of Prelate Tikhon Amafuntskogo. The people said: “At Tikhon the sun goes quiet”. It is considered the quietest day of the year. With Tikhon ends of the young summer, comes Mature. On this day arranged a feast for the workers who muck fields. These people have been very necessary because: “Where excess manure kolejka, there is the extra bread gingerbread”. Our ancestors noticed if the bees in the morning play will be a clear day, pounded to bad weather.

30 Jun revered the memory of the martyrs Manuel and Ismael. In olden days it was said: “Manuel sun stagnates (slow overhead)”. This national sign is confirmed by the data of astronomers: really, by this time Earth’s slowing down of motion around the Sun. In the night sky at this time visible lightning. Our ancestors on this day, listening to the trees: if the pine tree rings, and the oak groans, then the storm could not be avoided.

The first of July, the sacred memory of the martyrs Leontius, Ipatius and Fedulov. In the old days the first of July was celebrated, Yarilin day – scorching sun. For this reason organized festivities. Our ancestors on this day, watching the grass: if in the morning it is dry – the night expect rain. At this time, the raspberry fades, the lilies start to bloom.