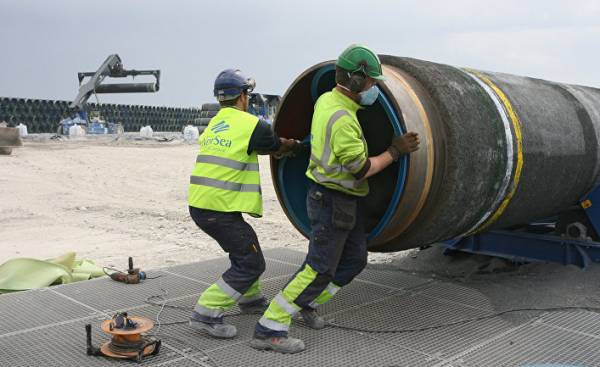 Brussels has given European investors a “green light” for the construction of the pipeline “Nord stream — 2”. Given that this project has already invested more than a billion euros, it would not be reasonable to expect that he will refuse. This is good news for Russia and Europe. For the first — because the new pipeline will expand its market and bring new contracts that will help the rise of the Russian economy. For the second — because the “Nord stream — 2” will give her the opportunity to strengthen its energy security, increase competitiveness in the global market and create new jobs. Bad news the project “Northern stream — 2” is only for Washington, because the pipeline will strengthen the conjunction of Russia and the EU and give these two global competitors in the US new strength. Who would have thought, but Washington needed only one in Brussels who moves in the coordinates defined American interests. Once Brussels starts to act independently from the “partner” it turns to the enemy. And the enemy is dangerous because, under certain conditions, the EU can catch up with the United States.

The causes of the American problems

The project of Russian-European (essentially Eurasian) energy cooperation is probably the most dangerous to American interests, because it simultaneously strengthens and Brussels, and Moscow, and Washington leaves on the side. The gas pipeline “Nord stream — 2” is an extension of an existing pipeline “Nord stream”, whose length reaches 1222 kilometers and has a capacity of 55 billion cubic meters per year. The pipeline laid under the Baltic sea and leads from Russia and Germany. Thanks to the project “Northern stream — 2” which will double the capacity of up to 110 billion cubic meters per year, opens up new opportunities for large-scale Eurasian partnership, one of the most important of which is China. The Washington strategists, this all seems anti-American conspiracy, so they look at the project with caution and suspicion.

Of course, they are right: despite the fact that the “Great Eurasia” not oriented directly against the Americans, she just throws them out of the game on the continent and assigns them the role of Junior partner. It is in this context necessary to assess the diplomatic-intelligence attack the USA throughout Europe. The Americans hastily take European countries into NATO and strive by all means to limit Russian and Chinese influence. The only disadvantage of this strategy is that it is a dead end. Beijing and Moscow enjoy watching the Americans do their best and spend a lot, but increasingly scarce resources, waging a geopolitical war, to win which can’t.

Russia cheered the news that the European Commission received a mandate to negotiate with the representatives of the Russian Federation on the project “Nord stream — 2”. Despite the fierce resistance of the American satellites (Poland and the Baltic countries), most of the EU — and especially Germany — have clearly expressed their support for the project. The future gas pipeline is of strategic importance in the long run more and that’s the reason why: if you start with pipeline “Turkish stream” Russian gas transit through Ukraine will be discontinued in 2019. This will deprive Washington of the same opportunities to use Kiev as a lever of pressure on Moscow. But Brussels can breathe a sigh of relief, as Ukraine will not be a significant obstacle to cooperation with Russia. In other words, in this case, you will somehow solve the Ukrainian problem.

Best for each other partners

Last week even the European Commissioner for energy Maros Sefcovic confirmed that the mandate for negotiations with Russia received. In April, Nord Stream AG 2 AG, which headquarters is in Switzerland, has signed agreements with five European partners: ENGIE (France), OMV (Austria), Royal Dutch Shell (Netherlands and UK), Uniper and Wintershall (Germany). These companies have pledged to invest half of its total value, reaching 9,9 billion euros. The remaining funds will provide the Russian Gazprom. “All proceeds as planned, transferred to the account 2 Nord Stream AG,” said June 15 the Deputy Chairman of the Board of Gazprom Alexander Medvedev. According to him, this project fully meets the requirements of European legislation as implemented by regulations which were made in the “Nord stream — 1”. Is not necessary to separately say that countries whose companies are involved in the construction of the pipeline, are the most ardent supporters of the “Nord stream — 2”. They should add the German companies E. ON and BASF, who will participate in gas distribution. Part of the profit calculates and Sweden, because the pipeline will be laid through water. In addition, this country will be based of the capacity required for construction.

Thus formed a closed design, which is all profitable, and where, more importantly, Russia and rest of Europe are partners. This will not tell you about the American plans for the delivery of liquefied gas to Europe. Indeed, in the case of their realization the lion’s share of benefits is only one side, and the energy source would cost many times the price of the gas Russia supplies from Siberian oil fields. So Europe, writes Tanya Vuich in “Politics,” said Washington, which will choose energy partners and will not rely on the American elections: “this Is the message official Washington from the governments in Vienna and Berlin in the next phase of aggravation of the transatlantic relationship. The reason for the unusually sharp statement by Austria and Germany against America was the decision of the U.S. Senate by a majority of the votes (98 out 100) to approve a new package of sanctions against Russia in connection with alleged Moscow’s intervention in the U.S. presidential election in November last year.”

The new us sanctions against Russia, according to statements on the desire of Washington to severely punish those firms who cooperate with Russian energy companies and participants of the project “Northern stream — 2”. Against the American intentions, said the Federal Chancellor of Austria, Christian Kern and foreign Minister of Germany, Sigmar Gabriel. They issued a joint appeal. “The energy supply of Europe is the question of Europe and not the United States of America. We cannot accept the threat of illegal extraterritorial sanctions against European companies that are involved in the development of European energy supplies. With a noteworthy openness to the bill, the United States describes why this happens: to sell U.S. liquefied natural gas to displace Russian natural gas deliveries to the European market. The aim is to protect jobs in the oil and gas industry in the United States,” — said in the appeal of Core and Gabriel, who also noted that Washington again put political pressure on Europe and its strategic interests. “And threats to impose sanctions on the US market, companies from Germany, Austria and other European countries, if they along with Russia are involved in natural gas projects such as “Nord stream — 2,” or financing them, bring a whole new and very negative quality in European-American relations,” the statement says.

German Chancellor Angela Merkel also expressed concern about Washington’s desire to punish those who are involved in the investment, sale, lease, and provide “work, services, technologies, information and support” projects aimed at energy imports from Russia. “It shouldn’t be. We always clearly opposed the extraterritorial U.S. sanctions that go well beyond the stated goals”, — said the speaker of the government Stefan Seibert.

The role of Qatar in the message to Europeans

In light of this, we should not forget the role of Qatar, whose share in European gas imports reaches 23%. After the visit of the American President Donald trump in the Persian Gulf burst into a sudden crisis. Qatar is now in isolation for “cooperation with terrorists”. All this can be considered rather as a message for European leaders who can’t count on a significant increase in gas supplies from Russia until 2019. American concern about the terrorist threat, therefore, fades into the background. By the way, the US bears a much greater responsibility for the education and strengthening of the “Islamic state” (banned in Russia — approx. ed.) that all Arabs and Europeans together. Americans want to cut off a major supplier to the European market, because right now USA offers Europe their services. It is therefore not surprising that the Europeans are resolutely focused on Russia as the only reliable energy partner, which, among other things, strong enough to secure their supply.

Of course, Washington will continue to put pressure on Europe, insisting she refused to energy cooperation with Moscow, and explaining the security concerns. Of course, no coincidence that NATO strengthens its position in those regions where it is planned to strip the Russian gas pipelines. Ukraine, the Baltic States, the Balkans — that is the point of contact between Russia and the EU, and, of course, it is strange that until now, Brussels does not have enough wisdom and determination to defend its vital interests.

Numerous artificially created pockets of instability at the borders of the EU, but also within them, not only lead to a worsening of the economic crisis, but also threatens the very existence of the Union. Perhaps it is time for Europe to Wake up and turn to the East — towards a real partner who will respect her legitimate interests. And, of course, Europe must be prepared to resist pressure from Washington. Recent harsh statements from Berlin and Vienna — the first steps in this direction.