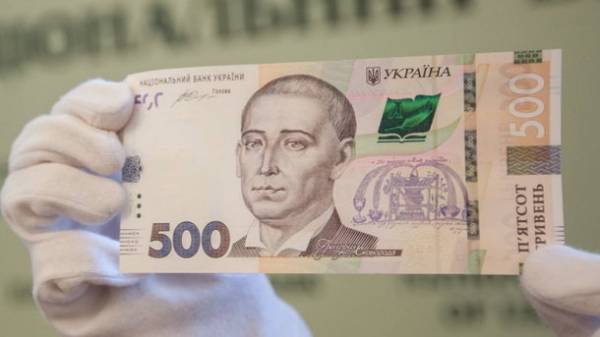 The leaders of fakes, with 4th place the year before, had escaped the denomination “500 UAH”. Banknote with Skovoroda was fictitious in 2679 cases that were studied by the experts of the national Bank. For the year of counterfeits was 2.6 times greater, and in two years – more than 4 times.

“Silver” in the number of counterfeit banknotes from 50 UAH – 1809 PCs Although in 2014-2015 bill with Mykhailo Hrushevsky was the absolute leader. But now her fake twice less than before.

“Bronze” in this sad competition receives 100 UAH for the second year in a row. Bill 100 UAH forged in 1432 cases. Even the “dvuhsotki” fake less: fictitious Lesya Ukrainka identified 642 times.

The NBU explained that the counterfeits they detect in an automated way with the help of special equipment. “The modern system of protection of national currency is on the same level with the protection systems leading currencies in the world, and the situation of counterfeit banknotes of the national currency is controlled,” – said the Director of Department of cash circulation NBU Victor Savenko.

The increase in the number of counterfeit banknotes of the highest denomination “500 UAH” (while the NBU will not be issuing a bill “is 1000 UAH”) – bankers explain increase of the level of technological fraud.

“Indeed, the number of counterfeit banknotes of high denominations increased. Fake banknotes of 500 UAH forged at a high enough level that gives you the opportunity to talk about the fact that these banknotes are produced on expensive printing equipment,” – says head of Department on coordination of work with cash and services collection of Ukrsotsbank Igor Doroshenko.

The expert believes that “printing” fake money is found in ORDO. “Our country is in a state of hostilities with the captured territories and, most likely, in these areas there is the equipment,” says Doroshenko.

“The most used Internet channels of distribution of counterfeit money, markets, stalls, small shops, rarely larger merchants. After the collection of commercial enterprises, such as gas stations, in the terms of cash by tellers notes to detection of currency from the Bank sometimes suspect some of these bills, which according to normative acts of the NBU transferred to the Central Bank for examination. But the cases of detection of suspicious banknotes do not have a mass character. Over the past few months by the Bank of such bills was not found”, – reported in the Oshchadbank.

The bankers have taken various measures to detect counterfeits. Special scanners banks can be installed not only in offices but also in self-service devices.

In 2017, the number of detected fraud may even rise as the banks are obliged from 1 January to pass on for re-release in the turnover of its branches, offices or other banks only those notes that are checked in an automated manner using equipment for automatic processing of banknotes.

“Bank customers need to be confident that the cash received in the Bank or at ATMs is high quality, brand payment and acceptable to the treatment,” says Savenko.