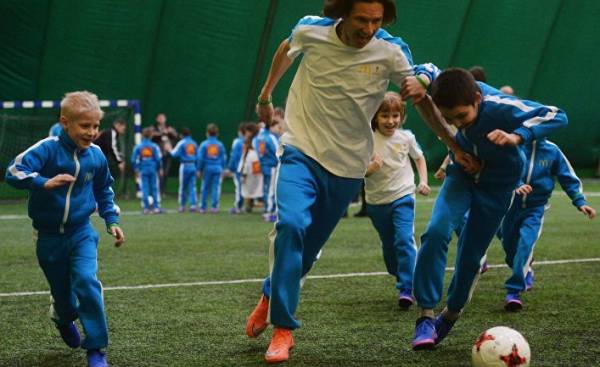 After eight years, Russian photographer Sergey Novikov travels around the country and photographing Amateur football team — from Murmansk in the extreme North-West to Nakhodka on the sea of Japan. Why the games of the Confederations Cup stadiums so many empty seats? Novikov said that the interest in football in the country is great, but the financial situation allows only a few fans buy expensive tickets.

SPIEGEL ONLINE: Mr. Novikov, why the games of the Confederations Cup stadiums so many empty seats?

Sergey Novikov: People interested in football, and the team is playing well. However, the ticket went through UEFA, and tickets are expensive. Those who can afford it, trying to get to the match the Russian team. For the match with Portugal all the tickets were sold out.

— In the Olympic city of Sochi on the occasion of the opening half of the stands were empty.

— Moscow and Saint-Petersburg is a big football city. In Sochi it looks otherwise — it’s sea and ski resort. The local club will come out of the third League due to financial problems.

You are in the for many years pictures of Amateur football in the Russian province. As they look at this tournament and for the upcoming world Cup 2018?

— Of course, they are proud that the world Cup will be held in Russia. At the same time they are looking at this tournament as something not very far from them. From Amateur football absolutely other problems, they have nothing to do with these tournaments. And these problems don’t become smaller just because Russia won the right to host the world Cup. But it is clear that the majority of football fans watch these games. The team of the Club “Legion” from Pskov was, for example, is outraged that their game was held in conjunction with the game of Russia against New Zealand.

— Are Your interlocutors to watch the world Cup games?

— I have been among those Amateur football players, with whom I met, a small survey. The opinion is unequivocal: in theory, they would willingly watched. But most of the players are working, many work shift. They would have to take a vacation. And for many, it is not clear how to obtain tickets. This requires, first, a spectator, that is a kind of accreditation. But the most crucial data point — and not just in the province is money. Tickets and way too expensive.

— Will give the world Cup and the Confederations Cup football in Russia momentum?

— The quality of football is not increased, neither the clubs nor the national team. Some believe that this is the fault of our foreign player limit: too few have foreign professionals who could be our League to raise to another level. Many young Russian players instead sign — and too early — a well-paid contract and thus stop developing.

— Is there a bad economic situation?

— The number of clubs officially participating in the games leagues, is reduced, and it is for financial reasons. Traditional teams take the names of sponsors to survive. However, there is a state program of construction of arenas with artificial turf, they do build everywhere. On the other hand, in the Murmansk region the games are not allowed and those teams that have no fields with artificial turf. There are a number of commands has been halved.

— Do wins Premier League from the football boom?

— It became more boring. Many owners of clubs have financial problems, some are struggling with sanctions from the state there is no help. Club “Dynamo Moscow” had an entire season to play in the second League. Club “Tom Tomsk” the whole second round played in the first League with the reserve team. On average, Premier League games are coming somewhere eleven thousand spectators. For several years this figure has not changed.

— Where did You go last time?

I went to Volgograd. The city is preparing for the world Cup and building a new stadium. The local Club “the Rotor” — in 1995, he for the UEFA Cup as something won from Manchester United — just managed to climb to the second League. But even fans know that the stadium will never be filled. And yet there is built infrastructure, new airport road, all of this city will come in handy.

— Who did You photograph?

— I did in the town of Kamyshin portrait of one of the team, which also has a rich history. Football club “the textile worker” in 1994 has held a friendly match against Palmeiras from Brazil and played in the UEFA Cup. Here now playing only lovers at the district championship.