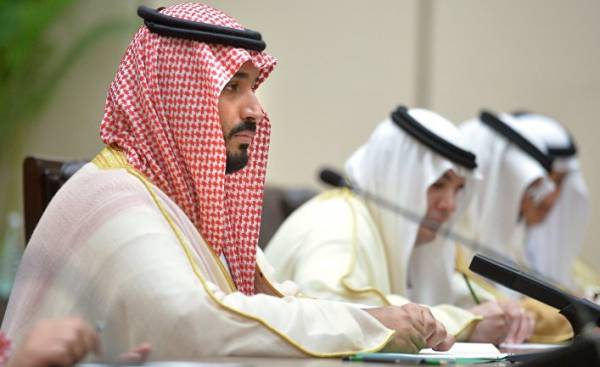 To become the crown Prince of Saudi Arabia is quite simple — just need to get the approval of the Board of crown dynasty (which, by the way, the opinion of the current monarch, though recorded, but it is not decisive), the blessing of religious community and the consent of Washington. 32-year-old Mohammed bin Salman has managed to enlist the support of all three stakeholders, and now in Riyadh-new crown Prince, the son of the current king Salman and his third wife.

A former heir, the king’s nephew Mohammed bin Nayef, at the same time held the post of Minister of the interior, stripped of his title and removed from the Ministerial post, suddenly being in an undefined status of “relative.”

Published on the occasion of the Royal decree cause staggering changes, which many observers already call the “velvet revolution”, named “special circumstances”. The essence of them publicly named, but, apparently, they were convincing for 31 of the 34 members of the crown Council, who gave their votes to “the little Prince” Mohammed bin Salman, or MBS, as it is called in the Kingdom.

Next Friday members of the dynasty at a special ceremony in Mecca to swear new allegiance to the heir, as long as they say, to avoid unenthusiastic thoughts promptly issued a decree on the restoration of all allowances, bonuses and special allowances of the military and employees in the public sector — previously cancelled due to “difficult economic situation”. And at the same time to note to note the same decree the celebration of Eid al-Fitr is extended for the whole week — 17 days instead of 10.

A year ago, to imagine that MBS will take the position in one step from the throne was unthinkable. Yes, soaring to the heights of power after the reign of his father, received the post of second Deputy Prime Minister and becoming the youngest Minister of defence in the world, he overnight became the idol of the young generation of Saudis, those 60% of the population who had not attained the age of 30.

Yes, saying that “Saudi Arabia is a Klondike inefficiently used assets,” ranging from 6% of world reserves of uranium and ending with four million vacant square meters of land in Mecca, having achieved the adoption of the strategy VISION-2030, the essence of which lies in drastically reducing dependence on oil revenues, he has earned the sympathy of the local bourgeoisie and foreign investors such as Boeing, Airbus, GM, Sony, Siemens, and other giants.

But for “die-hard” conservative circles both within the dynasty and among the clergy he was still a stranger, an ambitious upstart, any steps which was met by tacit resistance and condemnation.

And for Washington, his cousin, Mohammed bin Nayef, was much preferable. Had friendly ties to the highest levels of us intelligence, where it was called the “Prince of anti-terror”, he was considered in the USA one of the most loyal allies in the fight against terrorists, with the same “al-Qaeda” (banned in Russia organization — approx. ed.) , acting against them with American prowess and brutality in the style of Oriental despotism.

However, the terrorists answered him in return — in 2009, the bomber carried the meeting with him an explosive device in the rectum. However, this original method of assassination was not too effective — Ibn Naif was even serious, but still only wounded. And after recovery have brought their fight to the end in close cooperation with the US secret services he almost managed to kill “al-Qaeda” in the Arabian Peninsula and to cut the channels of financing, not only domestically, but also in the neighboring monarchies.

Even if it was under Obama, but trump initially any particular sympathy for MBS experienced. During a meeting in March this year, he took the young Prince rather cold, and official records of the White house about the meeting was dry and distant. However, the young Prince is not confused. He undertook to prepare the trip trump in Riyadh, and immediately after it the attitude of the White house to “the little Prince” has fundamentally changed how changed attitude on the part of the crown Council and the clergy.

So sudden and unanimous love always looks a little morbid, forcing to suspect the presence of a “second bottom”. And it ISD really is. More precisely, it is not even “second bottom”, and well calculated strategy of achieving the pinnacle of power, the throne of Custodian of the Two Holy places.

Well, not defeated, and success

All that belonged to the direct management of numerous funds of the Royal family, a gigantic military budget of the country and “assets of the pearls of the House of Saud”, the oil giant ARAMCO has always been the fate untitled technocrats, local and foreign. Members of the dynasty only removed the cream, which immediately spent, for the most part — for their own needs. “The little Prince” destroyed the tradition, closing the management of financial flows on itself. And at one point his relatives, as fed from the various funds, the leaders of the clergy, found that, where the money no come — all of MBS and its people. To stay in the opposition, the young Prince was suddenly very expensive in material terms.

With bin Naif at all without special difficulties, because for all his virtues he had issue, by local standards is critical — the lack of sons. What made him a candidate for the post of head of the dynasty and the Kingdom in the eyes of the local establishment a few, however mildly, flawed.

Been the United States. Money here it’s called “not played”. To refuse bin Nayef in favor of “the little Prince” Washington could get only something big, something that no one else, except for MBS, would not dare to offer. And that “something” Mohammed bin Salman has managed to find, pledging to achieve recognition of Riyadh of Israel and the conclusion of an ambitious agreement. Moreover, it guaranteed the involvement in this project is all dependent on the Saudi States from the monarchies of the Gulf to Jordan and beyond. With the sight of such a prospect, the Americans is not something that is supported by MBS, they have the opportunity, though tomorrow would be crowned.

In the end, all three parties involved reached a consensus — “the little Prince” it is worthy to be heir and de facto head of state.

A failed war in Yemen, the initiator and curator of which he is? So Saudi Arabia and without ever glorious victories on the battlefield did not differ, not defeated — and then success.

Woman too is human

The modernization of social life and hints that a woman is a human being? It is better to sacrifice the small — to allow women to get behind the wheel, losing the leadership in the Muslim world, and with it the head.

The main thing that appeals to local elites in MBS — his aggressiveness in the maintenance of the hegemony of Saudi Arabia in the middle East, its outrageous, even the irrational hatred of Iran, his willingness to use any means to dictate and impose the will of Riyadh its partners, which, incidentally, is experiencing today Pakistan, from which “the little Prince” in the form of an ultimatum requires sending troops to fight Houthis in Yemen.

In MBS of the local elite saw a chance to make a statement of its own exceptionalism in the Muslim world. The Americans is a reliable and unprincipled executor of its plans to reformat the Middle East, including in respect of Iran and the “Shiite arc”. And while Mohammed bin Salman consistent with this expectation, on the way to the throne of the Kingdom of Saudi Arabia has no obstacles.