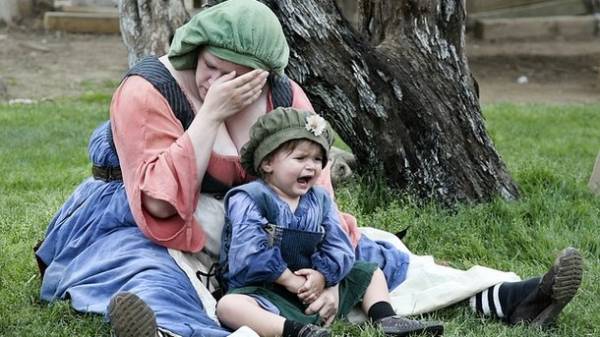 Motherhood is given to each woman is not easy. And not because it hard or easy to cope with the role of the mother, but because a woman’s body suffers greatly from the birth. If you are a mom in the last 10 years, you can still manifest the consequences, such as memory impairment and decline of energy.

This was told by the family doctor, the father of three children Oscar Serrallach, reports womo.ua.

He said motherhood is not an advertising picture, it is hard physically and psychologically.

The specialist also told how to counter post-Natal exhaustion.

Physics and poetry of motherhood

The placenta passes out of your body in kids every day, about 7 g total fat, as well as “pumping” iron, zinc, vitamins B9 and B12, iodine and selenium, and omega-3 fats and specific amino acids. The brain of the expectant mother in the prenatal period will lose 5% of its functionality in order to support the growth of the child and “to adjust to motherhood”. All this leads to what I call “postpartum exhaustion”, which often does not allow the woman to fully recover after the baby is born.

“The first time I was faced with postpartum exhaustion, when I came to Susan, a mother of five children, she just fell down. The tests were awful, I put her on a special diet, and counseling. She barely dosidela until the end of the visit, looked at his watch, jumped up and ran away. And the next time I saw her already in the waiting room of the er: she started the pneumonia, she had to drip antibiotics intravenously to save lives,” says Oscar.

Postpartum exhaustion within a few years after birth, looks that way: a woman runs to the family, to children, desperately doing his “duty” and absolutely forget about themselves. It is very dangerous. It can be deadly. And no you will not get a medal for this. Yes, part of this phenomenon is indeed a consequence of the changes of the brain in the mother, she turns on the “baby radar”, she is the guardian of the child’s needs. And so all your family members as soon as the baby is born — all the attention on him, nobody thinks that mothers need to sleep, eat, alone half an hour. Mother dissolves into the shadows of your own role.

Among the most common symptoms – fatigue and burnout, plus the feeling that you are “dumb”: low concentration, poor memory, emotional instability.

In addition, a woman may feel lonely, vulnerable, not well cope with the responsibilities. And this isn’t just any ordinary depression, said the doctor who identified a biochemical trail — the consequences of pregnancy and childbearing. Postpartum exhaustion hit up to 50% of mothers, and their children may be from several weeks to 7 years.

The symptoms of postpartum depression and postpartum exhaustion (resulting from imbalance of substances in the body) often overlap each other:

It is difficult to find someone who lives in chronic stress — our society simply pushes us to the status of “the squirrel wheel”, and the stress already affects the immune system, and hormone balance, and microflora and the brain. Lack of sleep generally has become the norm. Besides, women began to give birth much later, sometimes at the height of his career — on edge even more.

In modern society, the role of the family and relatives help a young mother in General has fallen to a rare Sunday visits. The food in our average home menu is becoming less nutritious. Environmental conditions — pollution of water and air — exacerbates maternal exhaustion. And mothers are silent and think it is all that this is normal of any mother.

“I believe that health four pillars: sleep, sense, activity, and nutrition. And in order to recover, you need to pass three steps,” says Oscar.

In the case of post-partum exhaustion tests show that iron, zinc, vitamins B12, C, D, magnesium, copper are far below the norm. This needs to be corrected first and foremost.

Add to the diet of fish and seaweed to nourish the brain and nervous system due to the fatty acids omega-3.

Identify food intolerances and possible allergies that often occur or worsen during pregnancy.

Now you need to take care of the support. Too much support is not there, and a babysitter is much cheaper than divorce.

If something is not right with the hormones necessary corrective therapy.

Increase the time for sleep and physical activity.

Many mothers are so tired that I can not sleep properly. To improve sleep and start to prepare for him for an hour before going to bed. The light in the room should be soft and warm, listen to relaxing music as possible, treat your bedroom as a “temple.” And if the house will be cleaned only in one room, let it be your bedroom. Light extinguished — and let it be completely dark, cool, turned off TV, computer, phone. If necessary, do relaxation exercises.

Exercise is better if they are in the company of other women, so it will be also an occasion for socializing, making new acquaintances — is also a part of healing!

Doctor recommends, to imagine that being a mother is not a life sentence and important, but only part of your life’s journey. Speaking of this and you will have to work in the final phase of the program.

“If you ask me, and if that’s so since the beginning of time? Before, they say, gave birth — and nothing, no one has heard of depression and exhaustion, no one thought to complain. I must say, this is not true, or not completely so. Because before people who was around the mother and child, family, village, guaranteed their presence, their help to the mother as soon as possible and fully recovered after childbirth. There were special rituals and practices which include spiritual cleansing and special diet,” says Oscar.

As an example, results from the situation in traditional China. There mother didn’t leave the house 30 days after delivery, did not come to her guests and she couldn’t give any instructions — she just nursed. Mother prepared hot, nutritious meals and avoid cold and drafts in the house. So now mothers very hard, but there is a solution, and it is the care of the self, sums up the doctor.