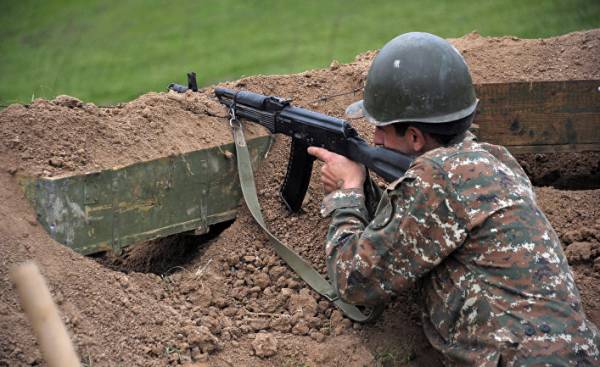 After another provocation of the Azerbaijani side on the Karabakh-Azerbaijan line of contact on 19 June, the co-chairs of the OSCE Minsk group arrived in Baku and held talks with the Azerbaijani leadership, trying to prevent seeming already inevitable possibility of a resumption of hostilities.

Given that the leadership of Azerbaijan has started the process of “greetings” intermediaries 17 June with the terrorist attacks and continues to conduct large-scale military exercises in honor of the visit of the OSCE, one can hardly assume that took place at the initiative of the co-chairs of the OSCE Minsk group Igor Popov, Stefano Visconti and Richard Hoagland’s visit will “put an end to the incident.”

After the visit of co-chairs of the risk persists, but not to the extent which would have shown that Azerbaijan is ready for large-scale military action. The evidence suggests that the reality is quite different.

First, the deterioration of economic situation in Azerbaijan is not talking about the fact that Azerbaijan is ready for war, but only the desire of the authorities to distract public attention from internal problems by expanding military operations. And this is the result of not only external but domestic stalemate of Azerbaijan.

Second, in recent months, Baku has had problems in relations with Russia, which was manifested in the termination of the Azerbaijani Congress of Russia and occasionally heard from the Russian foreign Ministry warnings.

Third, as if Turkey has not expressed its unconditional support for Azerbaijan, it cannot really protect his younger brother, if not to enjoy the strong support of the United States.

Fourth, U.S. policy in the region is still at a formative stage and therefore, Washington can’t give carte Blanche to the provocations of Baku, the results of which obviously will benefit others.

Fifth, the resumption of fighting along its Northern borders will be a direct and immediate threat to neighboring Iran, which without it has serious problems in its relations with the United States.

We can assume that a new set of provocations, the peak of which was June 17, and the parallel of contradictory statements of military and political leadership, Baku tried to send a signal to the two Armenian States, as the institution implements the mediation mission in the negotiation process — the co-chairs of the OSCE Minsk group.

The nature of this signal has formulated one of the outstanding officials of Ilham Aliyev’s administration, Ali Hasanov, after the talks on June 19. “The main principle is territorial integrity. We will never give up that principle,” he said.

So, the co-chairs either have to continue his mediation mission, based on Azerbaijan has put forward a principle, or “war and liberation of Nagorno Karabakh and other districts of the army of Azerbaijan is inevitable.”

But during those same negotiations, the behavior of Ilham Aliyev was quieter and more cautious. He, like always, turned the facts upside down, insisting that the recent provocations on the line of contact initiated by the Armenian side is trying to interfere with the activities of the OSCE Minsk group on the eve of their visit to Baku. To do this, Aliev used the death of an Azerbaijani soldier on June 17, of course laying the blame on the Armenian side, and boasted that the Azerbaijani army, as always, gave a proportionate response.

Such cynicism, of course, no one believes, including the co-chairs of the Minsk group, which, after initiated by Baku provocations may 15, have already given their explicit evaluation. But the problem is that they don’t know how to deal with Azerbaijan’s leaders regularly resort to provocations, and then receiving an innocent look.

Appropriate sanctions in this case would be the best solution, but the mediators is now unlikely to take such action for the reason that do not have a single plan in case of further aggravation of the situation. So, Azerbaijan will be given another opportunity to carry out a provocation, and put himself innocent, given that the government itself does not know how to continue already lost the diplomatic battle.

It is obvious that the present crisis has now shifted from the military line of contact across the borders of Azerbaijan. Defeated in the negotiation process, but aware that the resumption of war is fraught with even greater failures and even the threat of disintegration of Azerbaijan, as a state, the administration of Ilham Aliyev has no choice but to continue the policy of stretching the time of the regular provocations and depletion of the Armenian side.

Tactics such petty hooliganism indicates that Azerbaijan is fully “ripe”, not only to diplomatic but also for the new military defeat.

We believe that we should not cherish serious hopes that after the visit of the OSCE in Baku, the situation will again enter into the stage of long-term stagnation. Some time later the Republic to strengthen his power will be in need of corpses, and again we stand before the necessity of a disproportionate response. And here is favorable for the Armenian side, the situation slozhivshiesya on the negotiation table and in the regional situation, can not last forever.

So from today you need to think about the appropriate moment when Azerbaijan accumulating the crisis will reach its peak. In such circumstances, no matter Ilham’ll start a war, or it could be a reaction to organized any external provocation, as happened in Georgia in 2008.

It is important that the Armenian side was ready for this moment X, knowing that this is the final opportunity to resolve questions with the enemy, which is mired in internal crisis.