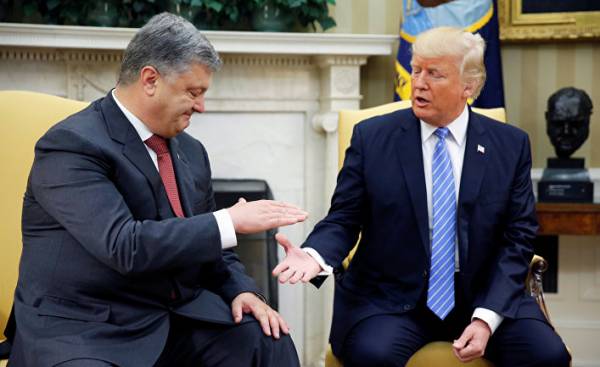 Ukraine has high hopes for the first in-person meeting and negotiations of the President of Ukraine Petro Poroshenko with the head of the White house Donald trump. And seems that the Ukrainian leader has managed to find an approach to the difficult nature of the US President to enlist his support in the confrontation of Russian aggression.

“Poroshenko stuck to things like Trump: 1) associate the Ukraine with a winning team, saying, “Ukraine is successful”; 2) spoke, saying “your leadership is admired”. He described the actions of the Ukrainian leader on his Twitter page a reporter for the New York Times’s Andrew Kramer.

Confirmation of the success of Poroshenko’s visit are also the words of trump, who at a press conference in the White house, said: “we had a very good discussion, these talks will last throughout the day. I believe there has been significant progress.”

It should be noted that while there were negotiations Poroshenko with trump, speaker of the house Sean Spicer said at a daily briefing in Washington that sanctions against Russia will remain until it withdraws its troops and militants from the Donbass.

Poroshenko himself, commenting in an interview on Fox News the results of “a full, very detailed meeting” with trump, said: “From the US we received strong support for the sovereignty, territorial integrity and independence of our country and continuation of reforms in Ukraine.”

This Poroshenko described the White house: “In my personal sense, he is a great leader, he has great charisma, has a great political will and is a strong friend of Ukraine, who will help me bring peace to my country. It is extremely important.”

He also noted that the second important part in relations between the two countries is the success story of reforms in Ukraine. “And here we are talking about effective engagement on implementation of reforms in the economic sphere — from the supply of coal from Pennsylvania to Ukrainian power plants to liquefied natural gas from Louisiana to the Ukrainian gas transportation system and cooperation in the nuclear energy sphere”, — said Poroshenko.

During meetings with us Secretary of state, the President of Ukraine has submitted proposals for a more active involvement of the United States to the peace process in the Donbass, and discussed ways of providing Ukraine defensive weapons. For its part Tillerson confirmed U.S. readiness to promote a peaceful settlement of the situation in the Donbass, and the preservation of sanctions against Russia until full resumption of sovereignty and territorial integrity of Ukraine.

The Minister of defence James Mattis, met with Petro Poroshenko, expressed full support for Ukraine and called for the preservation of sanctions against Russia as the aggressor country. During talks at the Pentagon, the sides discussed priority steps to strengthen the defense potential of Ukraine in the framework of development of strategic partnership from the United States and of deepening bilateral cooperation in the defense sphere.

Media reported that the summit on July 22-23, leaders of States and governments of EU countries will listen to the advice of their representatives in the “Norman” format, French President Emmanuel Macron and German Chancellor Angela Merkel about the situation with the implementation of the Minsk agreements for Donbass. So our President can’t relax after success in Washington and in communication with the leaders of the EU, in particular the new President of France to achieve not only conservation of the EU sanctions against Russia, but their gain because of the failure to Moscow Minsk agreements.

“Day” appealed to the Ukrainian and American experts to comment on the results of the negotiations Poroshenko with the leadership of the United States.

John Herbst, the head of the Eurasian Dinu Patriciu center at the Atlantic Council of the United States, former US Ambassador to Ukraine, Washington:

— It is good that President Poroshenko met with President of the trump before meeting with the us leader Putin. However, the White house decided to limit the significance of this event, significantly reducing the format of the meeting with Poroshenko.

With regard to the very short message about this meeting on the website of the American President. Perhaps the brevity of this meeting was a gesture to trump Moscow. At the same time, and that is much more important, trump announced additional sanctions against Russia just before meeting with the Ukrainian President. And as a balance, it was in the interests of Ukraine.

Trump talked a little about the aggression of Moscow in Ukraine. But it said its senior advisers. It is very good that President Poroshenko had a meeting with the Vice-President of Pensions and defence Minister Mattis.

The question of possible actions of the US administration regarding the Ukrainian-Russian conflict is resolved. Well, the US Senate passed a strong bill which provides for tougher sanctions against Russia, and trump has imposed its own sanctions. But the US administration should offer more economic assistance to Ukraine in exchange for serious reform.

The President, as a reformer works better when it is supported by the West. Therefore, the United States must do more to help Ukraine defend itself from continuing Russian aggression.

“This paves the way for successful collaboration”

— The most important signals during Poroshenko’s meeting in Washington was the following: the Declaration by the US administration to expand sanctions against Russian businessmen and officials, review Sean Spicer about the fact that sanctions remain as long as Russian troops remain in Ukraine, and the fact that trump’s meeting with Poroshenko before the meeting, us President Putin. It is clear that the trump delegate to relations with Ukraine, Vice-President, Minister of defense and the Secretary of state. But this is not a disclaimer; rather, the desire of the United States thoroughly and comprehensively to maintain the relationship with Ukraine and to take seriously the Russian threat. President trump is focused on a domestic agenda and their own political problems. Consequently, the delegation of responsibility makes sense.

The General atmosphere of the meeting trump with Poroshenko were positive. The leaders smiled at each other and seemed to feel comfortable. In the end it was a good meeting and diplomatic success in Ukraine. According to the report on the website of the United States, are assumed to be further detailed meetings. But as between Russia and the United States are growing tensions regarding Syria, I do not see any attempt by trump to seek a rapprochement with Putin, which means a clear support of Ukraine.

Important Poroshenko’s visit as the previous visit to Washington, speaker of the Verkhovna Rada Andrei Parubiy, build a very strong support of Ukraine in Congress. This paves the way for the successful cooperation between the U.S. and Ukraine.

In addition, there is now the probability of adoption of the agreement on security between the US and Ukraine. The Congress strengthens the Pro-Ukrainian position, as the movement in support of the fight against corruption in connection with new cases concerning violations of deputies.

“For the development of relations disposable little contact, though in the oval office”

— The performance of President Clinton in the United States is to evaluate terms of the kind of maximum objective set ourselves the Ukrainian side. If you just meet with trump earlier than with Putin, the visit is already considered successful. If you enlist the unconditional support of Washington in the war with Russia and the reform process in Ukraine, the results of the visit will become clear later.

Undoubtedly, the fact that Poroshenko’s meeting with trump gives grounds to say that the Ukrainian President is not in vain visited Washington. Admittedly, a few months ago, the chances of such a meeting before the talks with Putin was quite low. From the point of view of the diplomacy of symbols, which continues to profess Kiev in particular and America, this meeting is an important symbol. It means that the American President, though under pressure from the political situation, forced to demonstrate: Ukraine and its position no one in the White House does not write off from accounts. How this position will be taken into account during the negotiations concerning the settlement of the conflict over the Donbass — is another question. The answer to this question depends on a number of factors. And how convincing was the President Poroshenko in a report to the Ukrainian vision of the conflict settlement, the delineation of our “red lines”. And, by the way, how could presidents to find common ground, as there appeared between them a kind of “chemistry”. While it is important that the confirmed position of the new administration in favor of the resolution of the conflict in the Normandy format and the logic of the Minsk agreements, the performance of which is tied to the issue of sanctions.

I would like to have the meeting at the White House in the future was not only symbolic, but practical result in regard to the bilateral Ukrainian-American track, which is important at least to keep the status quo, at least to maintain the level of involvement of the United States to the reform process and support in the form of various programs (primarily relating to the modernization of the Ukrainian armed forces). In this context, it is important that virtually all messages after meeting Poroshenko in Washington carried reports about the discussion with the Ukrainian President’s security situation, but reforms and anti-corruption efforts of Ukraine.

It is clear that for the development of relations disposable little contact, though in the oval office. A continuous dialogue at the highest level. It is therefore important that a senior representative of the US administration in the near future visited Ukraine with the corresponding visit. Convinced that to truly understand the position of Ukraine is possible only while in Ukraine.