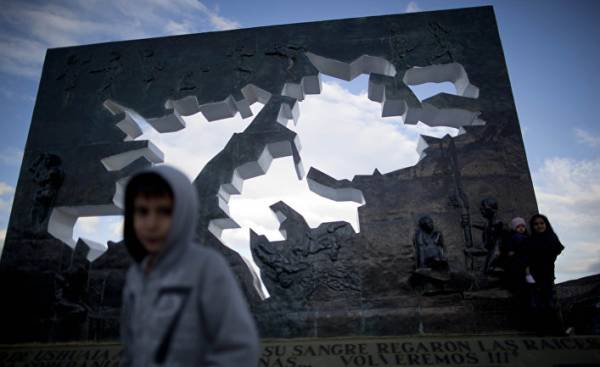 “Who does not rise, the traitor!” — shouted from the stands, the Argentines during the match between Argentina and Chile at the River Plate stadium in Buenos Aires on March 23. It’s been 35 years after the war between Argentina and Britain for control over the Falkland Islands, but the Argentines have not forgotten about the support provided to the London dictatorial regime of Augusto Pinochet (Augusto Pinochet) (1973-1990) during this conflict. They never miss an opportunity to blame the Chileans for this cooperation, and during football matches often recall old grievances. The Argentines not reach universal agreement. One of these unifying elements is the conviction that the Falkland Islands belong to Argentina. Then they disagree, but the reason for this statement no doubt, and the children repeat it as a mantra from an early age in school, and then adults defending this belief, considering it a matter of national honor. In any case, this conflict alive in the memory of Argentines, although since that time it’s been 35 years. The Malvinas Islands (as they are called in Argentina) remain the Falklands on the British charts, and Argentina and the UK does not have diplomatic relations. In Argentina, preserved folk memory about the war, about her often tell her many parties. Currently, the state pension get 22.7 thousand citizens of Argentina, many of whom were teenagers during the conflict. But this is Argentina, and around this figure, according to the National social security administration of Argentina (ANSES) has been a recurring controversy. Why 22,7 thousand people receive pension, if the Islands were 14 thousand soldiers?

Veterans of the Falklands war, receiving a pension since 1988, when it was legislatively established that the parties to the conflict are all those who participated in the fighting. At the moment under this program fell by 14 thousand people, and then the decree of former President of Argentina Carlos Menem (Carlos Menem) (1989-1990) and extended it for another 8 thousand. “On the Islands fought 14 thousand people, but the number increased to 22 thousand in the era of Menem’s presidency, thanks to an agreement with the Navy. At his request, the veterans were also recognized as those who during the war was on ships within 200 nautical miles from the coastline of the Islands” (exclusive Maritime zone for war at sea set by UK) — the Chairman of the center for war veterans in the city of La Plata, Mario Volpe (Mario Volpe). Then the list of veterans has added to the demand by former participants about improving their financial situation.

Protests were raised by the so-called recruits, drafted into the armed forces after the completion of compulsory military service. As arguments exhibited that if military personnel continued to receive salaries after the war, something about them just forgot environments of political chaos that followed defeat in the war and the fall of the dictatorship in 1983. In 1988 he was appointed consolation pension, but only in 2004, during the presidency of néstor Kirchner (Néstor Kirchner), policy towards veterans has changed. Kirchner tripled the size of the veteran’s retirement (today it is equivalent to three minimum sizes of pensions for old age, that is 19 thousand pesos or 1,225 thousand dollars) and called it honorable, adding to her social insurance benefits and family allowances. War veterans also received preferential travel on public transport, incentives for employment in government agencies, and other additional compensation.

Now the main debate takes place about who should be recognized as a participant in the war and can be considered the heroes of war who sent young men to the front, although it was obvious that Argentina will lose this war. The presence of former military Aldo Rico (Aldo Rico), who led a coup in 1987, the parade on the occasion of the celebration of the 200th anniversary of Argentina’s independence on 9 July last year caused a mixed feeling of indignation and surprise that showed the depth of the problem. Rico in the military field uniform came on the SUV along with other serving officers, who during the reign of the Kirchner couple hardly dared to raise his voice. But with the coming to power of Mauricio Macri (Mauricio Macri), they decided it was time to recall his role in that conflict, and again there were questions which for many years circulated among dozens of groups into which were divided the participants of the Falklands war.

In fact, we are talking about what should be written in history. You deserve the title of hero of the military who started the war with a single purpose — to give to the dictatorship of political overtones? Do they have the right to be in the Pantheon of fame along with those young men, sent to the front without arms, many of whom were destined to die from the cold? And what is the role of the Argentine society, which in 1982 gathered on the Central square of Buenos Aires, praising Galtieri Leopoldo (Leopoldo Galtieri) — the dictator who cried, excited with adrenaline: “If they [the British] want, let them come, we’ll give them a fight!” After 74 days, having lost 649 people, the Argentine military surrendered to British forces in Port Stanley. The answers to these questions are not yet given in the history of Argentina.