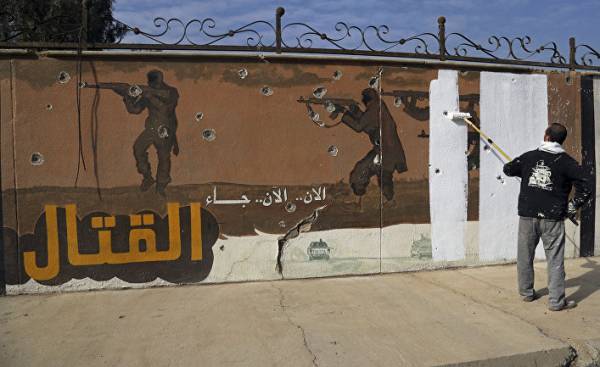 Although the mosque Nuri and blown up, and the Caliphate are close to extinction, the movement of ISIS (banned in Russia) remains a threat. Looming new war and new processes of decay.

ISIS militants — not the type of fighters who one day get up and start waving the white flag. They don’t give up. The coalition which is fighting these militants, too, does not want to take them with wet wipes and covered dining table.

As a movement ISIS coalition that includes the Iraqi government, the Arab and Western countries rely on war to the until there’s nothing left that could fight.

Five giant problems are increasing one after another as soon as the movement of ISIL is close to its death in Mosul, and soon also Syrian city of raqqa — soon he will be surrounded by Arab-Kurdish militia SDS (Syrian democratic forces) with the support of the United States.

Only a small number of jihadists prefer to give up. And the coalition is taking no prisoners.

But the defeat of the Islamic state in Mosul and raqqa is not the end of the war and the solution of those problems which were created ISIS and the Caliphate in June 2014.

Movement in the form of a Caliphate was at one time cruel. And war, whose aim is the defeat of the Caliphate, too, is cruel. The old city of Mosul several months in the environment without any possibility for militants to flee, not to mention the fact to give up.

And no European government will regret the fact that their citizens who have left their countries to Iraq as jihadists, home alive will not return. Every jihadist killed in Iraq or Syria, European governments are exempt from the need to monitor returnees, to judge them for rioting and terror.

It’s a relief for governments. But this raises a concern. Companion death in Mosul and raqqa will grief, anger and desire for revenge on the part of friends and allies in the Arab world and Europe.

2. The Caliphate is dead, and ISIS continues to live

The movement of ISIS disappears as a “state” but not as idea, not as a virtual network, and especially not as the driving force.

As al-Qaeda (banned in Russia), for 16 years as the existing terrorist threat after the coalition headed by the USA, defeated the base movement in Afghanistan and the movement of ISIS will continue its activities.

And bloody attacks in Turkey, France, Belgium and Germany can be a harbinger of aggression and inspiration distributed by ISIS.

It has long been demonstrated that political terrorists in the Arab world and Europe does not need decision-making or the delivery of weapons from Mosul or Raqqa to carry out their actions. They can turn into a deadly weapon everything from kitchen knives and fertilizers to trucks. And they do it.

Their driving force they are in rage caused by injustice, deterioration and war on other streets, in other cities or countries where they live. Preachers, apologists, and the harbingers of the movement of ISIS can offer a lot for such inspiration.

All of this will be violence long after the fall of Mosul and Raqqa.

3. ISIS did not arise out of nowhere

The movement of ISIS was found and recruited their Iraqi militants due to the bitterness caused by the deteriorating situation in the Sunni provinces of North-Western Iraq. The Caliphate was offered not only religious solace, but in fact a form of the state, some public services, funded by revenues from oil, taxes and extortion. Although the coalition Gromit base of the Caliphate, the government in Baghdad continues to cause people to bitterness and resentment.

The government of Iraq allowed the Kurdish militia Peshmerga to enter Mosul from the North and East, and the Shia militia shut down Mosul from the West and the East. But if the Iraqi government after the fall of the Caliphate will allow foreign Shiite or Kurdish soldiers to control Mosul, it would be a recipe for a new conflict.

The government has focused its investment in other provinces. And anger Baghdad, has good fertile soil. It will speculate ISIS and other Iraqi movement willing to resort to violence. They have after the fall of the dictatorship in 2003 has left a lot of weapons. And as long as in these provinces not happening social and economic development, traffic, ready to resort to violence, will have rich opportunities recruitment into their ranks.

“In Iraq there is a political crisis that no one is trying to solve,” says researcher Sayig by Yazid (Yezid Sayigh) Agency al-Jazeera.

4. Iraq in danger of falling apart

After the fall of the Caliphate to the government of Iraq could threaten the collapse, the cause of which may be the Kurds and the Sunnis.

Kurdish soldiers have shown their strength and willingness to sacrifice in the attack on Mosul. They also defended Kurdish territory and take in so many refugees that people spend days waiting at the border while Kurdish autonomy checks to see if they had links with ISIS, says Kurdish news Agency Rudaw.

Kurdish autonomy wants to use this opportunity to hold a referendum on secession from Iraq. It will happen in September. The government supported and valued autonomy, but fears its release.

Sunni Arab politicians are discussing, not whether they should do the same as the Kurds and Baghdad to say goodbye.

Unlike the Kurds, they do not have enough resources to its development, they have no oil, they have no clean water, they have not developed agriculture. But they have the power to yank the blanket, which holds a single state of Iraq.

And they have a lot of fierce people, ready to fight with Baghdad.

So Iraq really threaten two new internal wars and in the worst case, the partial collapse.

“If the problems between the Sunnis, Shiites and Kurds will not be solved as it should, between these groups can break out fighting,” said Vincent Stuart (Vincent Stewart), the head of American military intelligence, DIA, during the Senate hearing, which took place during the assault on Mosul.

5. Syria threatens a return of the dictatorship

The possibility of ISIS militants to flee Iraq to Syria went to legends. Syrian Kurds and the international coalition against ISIL close to get the border under control and are prepared to complete the encirclement of Raqqa, the last big city of the Caliphate.

Russia agreed that the coalition, headed by USA and its ally, the SDS will destroy the last of the jihadists in raqqa. And here, too, it is unlikely that the jihadists will raise the white flag. Here, Arab and European governments are not in a hurry to invite jihadists back home for retraining.

But the great powers and the Syrians did not come to an agreement about who will take power into their own hands in raqqa after the fall of the Caliphate.

In the same way as in Iraq, the Kurdish militia in the region, the people’s protection units YPG, offer their services, although the Kurds do not constitute the majority of the local population.

In Mosul not enough Iraqi Arab population, to be accepted by the state and participate in the development of the state.

In raqqa, the Syrian Arab population rather fears the return of the dictatorship of Assad. But Assad in his speeches and interviews said that his army did not end the war until then, until we liberate the whole territory of Syria.

But the Syrian army will not enter in Raqqa without war.