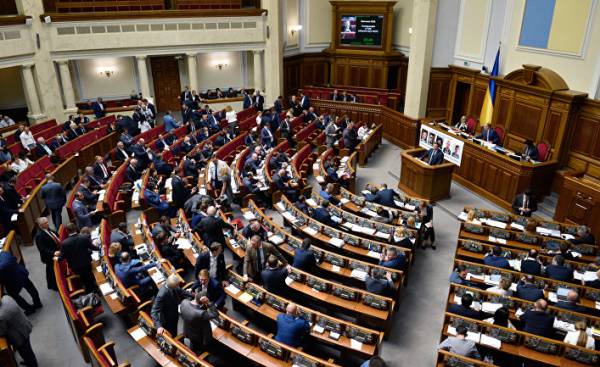 Most experts who commented on the new bill for Donbass, I think this step is correct. Of course, comments are quite restrained and cautious, including from the ruling coalition, since we are talking about a document that has not yet seen. Developed concept not yet widely available.

Overall, that sounded, there are two important things. First, we introduce the formulation of the temporarily occupied territories, and that’s what should have been done long ago. Second, changing the format of the ATO on the format of the military operation. It is also correct, since the anti-terrorist operation ended in August 2014, when it was introduced by the Russian regular troops.

Another important point of the new bill — the possibility of declaring martial law in certain border areas. The current procedure for the Declaration of martial law enshrined in the Constitution and spelled out for the whole country or for individual regions. In addition, it requires approval by the Verkhovna Rada. The new law will make the procedure of the imposition of martial law is more local and more flexible — exactly where the fighting is.

Contradict the law of the Minsk agreement?

The question arises: how is this project different from what has made “Self-help”. From what people say the speakers BPP, it looks like the previous draft they are not satisfied with the thesis that Ukraine is not responsible for its citizens in the occupied territory. Assume that in the session hall will be much debate on the new bill, but for those factions that call themselves democratic, it would be logical to support it. It corresponds to the fact that the long-demanded military, volunteers, experts, the opposition and the majority of the population of Ukraine. After all, most of the population agrees that it is not ATO that it makes no sense to talk about special status, to hold elections in the occupied territory, to carry out the Amnesty, etc.

The international aspect of the bill. If he contradicts the Minsk agreements?

It is obvious that the Russian propaganda will say contrary. Personally, I see no contradiction, because the Minsk agreements provide for a phased solution to the conflict: first security, then a political settlement. At the moment everything is stalled at the level of security. Not implemented paragraph 1 — the issue of the truce. Therefore, the position of Ukraine is perceived by our Western partners. If they had said: “Let us constitutional changes, special status, election”, now it is clear that this is impossible.

Here is an example. One of the associations of European parties in the European Parliament held a regional conference in Kharkiv. They went to Slavyansk in order to see the situation on the ground. One of the options of the program called for the further journey on PPC. But the leadership of the Association was forbidden to go there because of the danger and in the end no one on the PPC did not go. The question arises: if it is dangerous to go, even on PPC — where daily walks of a large number of people, then how can one speak about some kind of monitoring of a situation on Donbass the international observers for the elections. It is absolutely impossible.

Another interesting question: how is this all related to the President’s visit to Washington. did Poroshenko to agree on this document with trump. This question of course can be discussed, but in General the process is already running. It is difficult to imagine a situation where after the announcement of the bill, refuse him after a trip to Washington. I think the process has already started. And with our Western partners can specify certain details and phrasing.

If we talk about the presentation of the document before the closing plenary session of the Verkhovna Rada, I don’t think anyone of parliamentarians, not enough time to read this bill. It would be the political will and the session, in the end, you can continue. And not only in connection with this bill — there are many other bills that need to be taken. Our population is very critical to assess the activity of Parliament, and if members will donate a portion of their holidays for the adoption of important laws — it will only raise the prestige of their activities.