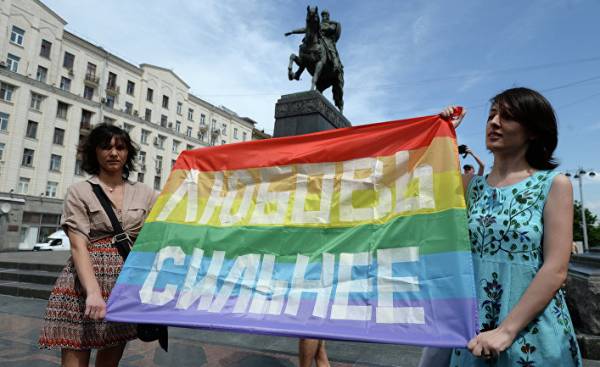 “Homosexuality is not a perversion. Perversion is hockey on grass and ballet on ice”. These are the words of the famous Soviet actress, winner of the Stalin prize of Faina Ranevskaya. She’d probably be surprised to see the serious consequences this has her saying now, 30 years after her death.

12 APR 2012 activist Nikolai Alekseev, who plays for gay rights, came out with a placard on which was written this aphorism Ranevskaya, the square in front of the administration of St. Petersburg and was soon arrested by law enforcement officers. For the “propaganda of homosexuality” Alexeyev had to pay a fine of five thousand rubles (about 77 euros). Even in Russia, this amount cannot be called significant, but for Alexeev it was a matter of principle. He appealed against this decision in city court of St. Petersburg, but to no avail. In June 2012, he appealed to the European court of human rights (ECHR).

Similarly did the resident of Ryazan Nikolai Baev. He rose with similar signs in front of schools and children’s library. “Homosexuality is normal”, was written on these posters. And also: “I’m proud to be “blue”!” Baeva was detained because in Ryazan since April 2006, the law on the protection of children, which prohibits “the open promotion of homosexuality among minors”. Bais was sentenced to a fine of 1,500 rubles (about 23 euros), but appealed to the Russian constitutional court, and after the rejection of his claim to the ECHR in Strasbourg.

A resident of Arkhangelsk Alexey Kiselev in 2012, accused the Russian authorities of negligence and misinformation: “In Russia the highest level of suicides among teenagers. A significant portion of them are gay. They decided on this step because they receive too little information about their nature”. Kiselev came to the following conclusion: “the MPs — child-killers”. In the end, he was sentenced to a fine of 1,800 rubles.

Now, the ECtHR ruled that:

— in all three cases was a violation of article 10 of the European Convention on human rights, implying the right to Express own opinion;

— was also ignored article 14 of the Convention on human rights, involving prohibition of discrimination;

Although officially Russian law banning “homosexual propaganda” designed to protect minors, the Russian authorities acted in a discriminatory and contributed to the spread of prejudice and homophobia, decided by the ECHR. Withholding information about sexual identity and gender issues is, in the opinion of the court, “counterproductive.”

11 Jun 2013 the President of Russia Vladimir Putin signed the Law № 135 “On prohibition of propaganda of nontraditional sexual relations among minors”.

The experts are afraid to Express their own opinion

The authors of the law believe that man is born without having a sexual orientation, but may purchase it later — that is to say, under the influence of “advertising homosexuality”. At the same time representatives of the Russian leadership did not give any explanations, “not to mention scientific study,” the assertion that this “homosexual re-education” is indeed possible, as stated in the ECHR.

“I am very pleased that the ECtHR has unequivocally refused to recognize this theory,” — said in an interview to our edition the lawyer Baev Dmitry Bartenyev. Of course, in Russia there are eminent psychologists who believe that homosexuality is innate property. “However, for this reason there is no expert dialogue, in particular because experts are simply afraid to Express their own opinions. Perhaps this ruling will give them courage.”

The Russian judge Dmitry Dedov was the only one who voted against this decision of the ECHR. According to him, the private life of children is more important than freedom of opinion. “The idea that sexual relations between people of the same sex — is normal, creates prerequisites for the fact that children can accept them purely out of curiosity.” This raises the risk of sexual violence.

Fines and a ban on the profession

Supporters of the law banning “propaganda of homosexuality” has always indicated that the denial of same-sex relationships was originally incorporated in the Russian society. The ECHR, however, ruled that the Russian government failed to prove that the free expression of ideas on the topic of LGBT can discredit the “traditional family.”

Depending on who is involved in “propaganda of homosexuality”, it provides for penalties from four thousand to one million rubles (60 to 15 thousand euros) and a ban on the profession for a period up to 90 days. For foreigners and individuals without citizenship are separate fines from four to five thousand rubles, but in special cases they may fall under administrative arrest up to 15 days, and to be expelled from Russia. 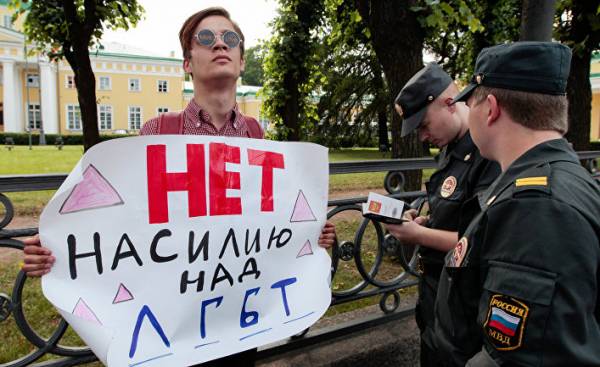 Although the sanctions set out clearly the Russian law, according to the ECHR, not the lack of language precision. Because of the vagueness of the wording of the law can be interpreted unacceptably wide and thereby open the way for abuse. According to the lawyer Barteneva, it is “very important aspect”.

Real or only a symbolic victory?

Nikolai Alexeyev called the ECHR decision “a tremendous victory” of the Russian LGBT community. But what specific effects it may have?

In other words, it was about big money. And in such serious cases, there is no sense of the fact that Russia at the time signed the European Convention on human rights and, strictly speaking, obliged to execute the decisions of the ECHR.

The Russian government will submit a protest

Lawyer Bartenyev nevertheless optimistic. As the subject was a public outcry, he said, “it is highly likely that Russia in the future will think about the conflict between the ECHR and the Constitutional court”.

The decision of the court has not yet entered into force. The Russian Ministry of justice has already stated that the ECHR decision will be subjected to verification. In his opinion, the laws prohibiting propaganda of homosexuality does not contradict international practice.

In Russia homosexuality until 1993 was considered a criminal offense, and until 1999 peteralexander behavior was classified as a disease. The society is still widespread homophobia, and there are cases of attacks on people with different sexual orientation.

Recently, wide international interest was aroused by the campaign against homosexuals in Chechnya. Under the influence of the Council of Europe, the Russian leadership even agreed to check the relevant approval. But can we say that strict law enforcement in the Caucasus contributed to the advancement of homosexual persons in Russia? Bartenyev said about it: “Chechnya is very far from Europe. But gay rights should be observed.”