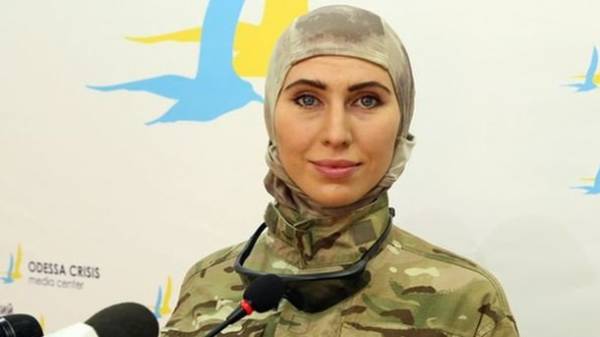 Amina Okueva, wife of Adam Osmaev, who was wounded during the failed assassination attempt, shared his impression from the killer and told the details of the attack on her and her husband.

According to TSN, in the opinion of AquaWay, the attack on her husband was made an experienced killer, who for many years was engaged in many tasks completed, received a lot of information. “Judging by the way he talked, his psychological training, is very skillfully faked a European accent, all the while talking with a European accent, it was not in Kadyrov’s yard, it was preparing the FSB or GRU, a more serious office,” – said Okueva.

“If I have it wasn’t instinctive, then it wouldn’t work. The killer managed to make only two shots. I didn’t even know that the second hit the hand, for life is not dangerous. I only had to remove the fuse in order to self-carry a round in the chamber. If not a round in the chamber, I would not have time to do anything. He turned around and stopped firing and began to reach out to me before the gun, I slumped and fell, leg sharply and strongly pushed in the face. He flew to the windshield of the car. He took off the safety, took a series of shots until I stuck the sleeve,” he shared details of Amina Okueva.

She noted that she is pleased that the killer was still alive. “But it is not my merit. If I had not jammed the sleeve, I would have released the whole store and he had very few chances,” added Okueva.

“The fact that he is alive is a miracle. This is important not only for the entire policy, but from a geopolitical point. Russia sending in their terrorists and saboteurs around the world, he worked in Austria. He now works in Ukraine, this man tried to work in Ukraine. There is absolutely no guarantee that mass terrorist attacks in France or somewhere else happened, they could create the same people, they are professionals and unscrupulous, that there is no difference to kill someone ordered, or to attack the crowd”, – said the wife of a wounded volunteer Osmayev.

As reported, on June 1 in Kiev there was an attack on the spouses of volunteer Adam Osmayev and amine Okueva. According to police, the man, who introduced himself as a foreign journalist, had agreed with the couple about the meeting.

“When they got into the car, unknown persons took out of the box Glock pistol and shot in the chest Osmayev. In response to Amina from your pistol took a few shots in hand”, – militiamen reported.

Osmayev and a striker with gunshot wounds was hospitalized.