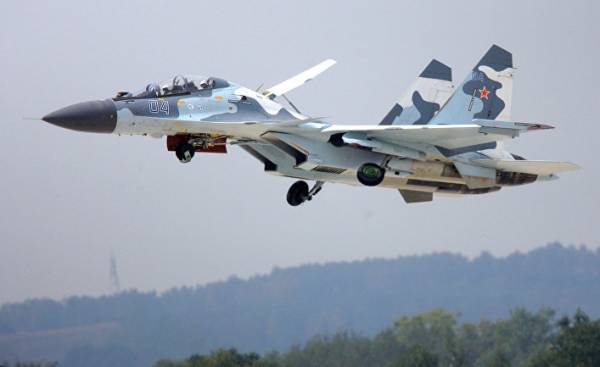 Belarus will buy from Russia a dozen of fighters su-30CM. The contract was signed at the international air show “Le Bourget-2017” in Paris.

This powerful multifunction machine of “4++” generation. Alexander Lukashenko has long dreamed to enhance dramatically the aging combat aircraft of Belarus a couple of dozen of these aircraft. So you could say its a dream half come true. But with this acquisition is not so simple. Talk about the pitfalls of the transaction.

Lukashenko wanted the aircraft is the Russian air base

The Belarusian President more than once (starting with the Sochi 2012 meeting with Vladimir Putin) has appealed to Moscow on the fighters. Because the Park Russian air force, which is based on made in the USSR aircraft, decays dramatically.

“If in 2001, we had 266 fighters and attack aircraft, at the beginning of this year there are seventy-something, and the big question, how many of them fly,” said the Belarusian military expert Alexander Alesin. According to him, “a couple of years, not what will fly”.

A few years ago, Moscow responded to the problem on their own was to break the creation of its own air base on the territory of Belarus in Bobruisk, where from the Soviet era remained a military airfield.

But Lukashenko has shown remarkable persistence, even went to the scandal with the Kremlin, fighting off the idea. Because I realized that the airbase in Bobruisk will complicate (and this topic has become especially sensitive “after the Crimea”) only just started the process of establishing relations between Minsk and the West.

Yes, and the people, as shown by sociology, this idea is not popular. And, of course, the opposition immediately began to play the card: the regime wants to set the country under attack, to weaken the sovereignty and all that.

Lukashenko offended that painful for his reputation the issue of the airbase, the Kremlin has put squarely before the 2015 presidential election.

In February of this year the Belarusian leader commented on this conflict: “Why, then, before the presidential election, when there seems to be some movements on the West went, we base here? So base, and ten or twenty aircraft plant wanted — a demonstration. We need it, and this demonstration? No.”

The Kremlin does not favor, and your interest observes

At the same time Lukashenko told some details of his discussions with his Russian counterpart on this slippery subject: “I Putin said it is necessary to recreate the airfield (in Bobruisk. —approx. of the author), there is already a runway half disassembled, why ten aircraft? You give me twenty planes, great pilots, great school. You know that we are not fighting is worse on military aircraft, you give us twenty aircraft, we are a United group. No.”

But now, as we see, did so. However, not 20 cars, but only 12. However, there is, perhaps, the question comes to the solvency of the Belarusian side.

Terms of the deal have not been disclosed. Dmitry Shugaev, the head of the Federal service for military-technical cooperation of Russia, made it pretty vague, saying that the contract will be implemented in stages according to prescribed in the contract terms.

Meanwhile, Lukashenko on 7 April, commenting on hot on the heels of a turning point that put an end to the oil and gas conflict talks with Putin in St. Petersburg, frankly said: “I want them (the Russian leadership — ed. author) to move to ensure that they still provided support for the rearmament of the Belarusian army. Moreover, re-equipment or for their account or for a small price. We will not be able for the present armament of our funds to pay: we have no oil, no gas, and it mainly sources of re”.

As it turned out, Peter between the two presidents was discussed specifically about the aircraft, and Putin, according to Lukashenko, “immediately jumped up: “do you know how much it costs?” I said, “you Know about the su-30, well, 20-25 million”. Yeah, okay, I’ll pay half. Because we need it now, even now. Because the old model of “su” and “MiG” out of operation, and we need more modern”.

Alesin said that $ 25 million for the su-30SM is a very gentle price, but in General such machines, depending on configuration, are sold in foreign countries and 35-40 million: “There’s open architecture, the customer can ask for any imported equipment”.

But 12 aircraft even 25 million is in the amount of more than half the defense budget of Belarus. Minsk is clearly not able to take and put on the barrel are big by our standards money.

Alesin assumes that Russia can “go to the benefits of the prices on these planes”, and “huge down payment” or lease. And Moscow in this case, according to experts, not so much doing a favor, having “mercy Belarusians,” how much it cares about its own strategic interests in the Western direction, given the worsening of relations with the NATO countries.

In particular, the source said, Russia annoying placement European base in Poland, NATO battalions in the Baltic States and Poland, equipment of the Polish strike fighters F-16 new cruise missiles capable of hitting targets at a distance of up to 900 km.

Feed these monsters will cost a pretty penny

Besides, says Alesin, the delivery of su-30CM — is for Moscow, and even the “way stronger” binding Belarusian ally (which in recent years, from the point of view of some Russian commentators began to flirt with the West, China, too generally to conduct an independent foreign policy).

Since the su-30SM is a offensive strike aircraft, their appearance here may arouse suspicion among NATO neighbors, become a bone of contention between Minsk on the one hand, and Poland, the Baltic States, on the other, suggests Alesin.

But Andrei Porotnikov head of the analytical project Belarus Security Blog, draws attention to the fact that “heavy twin-engine fighter aircraft is expensive in terms of a life cycle cost”.

“You can buy a car at a reasonable price, and then not be able to maintain their operational readiness due to financial factors,” — said the expert.

According to him, the su-30SM is definitely a good car, one of the best in its class. But for Belarus — “excess, and it may be that the very heavy cost of operation”.

“The more that the focus should be on the cost of the same fuel is not “as we now have”, and “how now in the West.” As cheap Russian oil to Minsk may end in a couple of years,” added Porotnikov.

In short, these su-30 look like a double-edged sword. On the one hand, strengthen our air force and air defense forces. Besides this gesture of Moscow may indirectly say that she accepted it failed at the air base.

On the other hand, raises risks that the Russian leadership will involve Minsk in its confrontation with the West. And in addition these machines can be too expensive in terms of operation.

Especially Belarus in recent years due to the economic crisis, was forced to shrink the defense budget. And the prospects of rapid economic growth is not yet visible. Especially with the reluctance of the government to reform the economic model.

A poor country in the current era of expensive high-tech weapons can not in principle to create a strong defense.