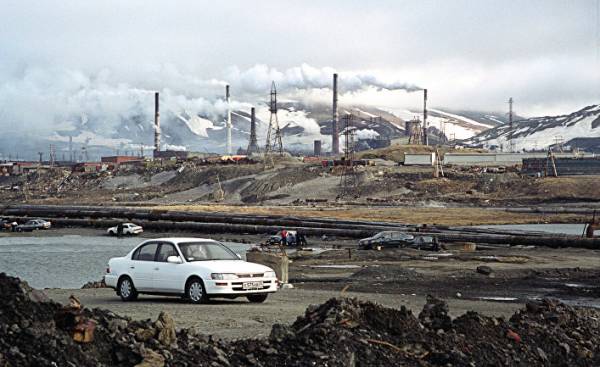 Where almost nothing grows, an incredible variety. A variety of grey and black. The closer a traveler approaches the city of Norilsk in Northern Siberia, the this variety more. Late spring here, 300 kilometers North of the Arctic circle, there is still a lot of snow. First, it is covered with a grey layer, then ash-gray, on the outskirts of town he’s black and in the distance the soft gray. where it merges with the dark grey factory smoke. In some places the snow molds gray pearl, as if to hint at what treasures are hidden under them. This hint is superfluous, treasures of Norilsk known for a hundred years. This made the city a stronghold of first the Soviet and then Russian industry — and one of the most polluted places on Earth.

Norilsk will welcome you with a series of panel buildings, its wide side facing out to protect from snow storms. In Norilsk there are 170 thousand inhabitants, it is the second after the city of Murmansk in the Arctic. The area is rich in copper, cobalt, platinum, palladium and Nickel. So there was a mining concern Norilsk Nickel, the world’s largest manufacturer of this bisnaga metal, an important producer of many other metals and the largest mining company in Russia. Nearly 60 thousand of the 84 thousand employees live and work here.

Around Norilsk in the ground take five mines, two blast furnaces smelted from the ore the metals that are used in almost everything that relates to progress — from phones through to medical equipment to spacecraft. On one of these melting plants six-year-old Daria left a message. “I love your father very much. I love it when he buys fruit. Dad loves apples.” Fruits are luxury goods to the North of Siberia. High transportation costs all make the goods expensive. Daria drew a portrait of his father, Sergey, leading engineer, and wrote the text: “He works in the factory. He tells workers where they need to go to work.”

When the workers go to work, they walks past Daria. In a long corridor that leads from the offices to the smelting furnaces, hanging her picture. Beside the work of other children. A small art gallery before almost melting furnaces. The smelting plant is called “Hope”, the world’s largest metallurgical complex. It combines three factories, including sulfur concentrate and compounds Nickel and copper. Ovens with a height of seven floors, about fourteen floors is the height of the plants. After each melting in a furnace metals are becoming clearer. Some people say that in Norilsk there is nothing but hope. But it is not local. As in other mining towns around here are proud of their work.

In a small Museum in the complex “Hope” the head of Department Denis Viktorov turns over documents: the first house in this locality was built in 1921 near the river Nerilka, wooden hut for researchers. When the mineral wealth has been proven, the Soviet leadership decided in 1935 to build the plant and the city. To do this, first create a work camp, called “Norillag”. The number of prisoners of the Gulag in 1951 has increased to 72 thousand. After the death of Joseph Stalin in 1953, it took another three years before the closure of the camp.

After the collapse of the Soviet Union, Norilsk Nickel was privatized. They sold the lot to Vladimir Potanin, who as the Deputy Prime Minister carried out the privatization program. Potanin became a billionaire. 56-year-old businessman now controls 30 percent of Norilsk and is its President. Metallurgical business profitable: turnover of 8.3 billion dollars in 2016, turned a profit of $ 2.5 billion. Since 2009, the group average shows an annual turnover of $ 11 billion, the industrial margin (Ebitda) of 47% and a profit margin of 22%.

It all started with the Gulag and barbed wire, but today in Norilsk there is no protection and no control. There is only checking at the airport: although there is only land planes of the Russian cities, everyone arriving must go through passport control. Norilsk is one of the few so-called closed cities that still remained in Russia after the collapse of the Soviet Union. Foreigners require special permission to enter. To this area is not accessible neither on the road or on rails, only a boat or a plane.

Two thirds of the year there is frost, the temperature can drop to minus 50 degrees Celsius. One and a half month long polar night. “You Europeans. You probably wonder how we live here. But we live well. Everything can be used”. Ksenia with her strong voice leaves no doubt. This grandmother belongs to the nation of ents, one of the few local peoples in the area North of Siberia. For the local history Museum in Dudinka, a port city 80 kilometers to the West, she met the alien.

Enets today comprise almost 200 people, is the indigenous native people of the region. Enets nomads, they traditionally migrate with herds of reindeer, and reindeer moss. Pollution from mining and factories leads to the death of mosses, says Ksenia. “Norilsk Nickel brings a lot of trouble,” she adds. “But without this industry we can’t survive. We must do something to solve all these issues.”
Factory emissions of oxides of copper and Nickel, and particularly of sulphur oxides — has infected the area around Norilsk in the radius of tens of kilometers. The soil is saturated with metals, acid rains destroy the vulnerable poor vegetation of tundra. Life expectancy, according to a decade below the average for Russia. Under adverse wind gas emissions sometimes reach Canada, even wrote the state office for environmental protection in 2012. The majority of working production systems was constructed in Soviet times, when nobody was thinking about environmental protection.

And yet, “Norilsk Nickel” in 2013 ordered the change in strategy and now concentrates on the largest and most profitable industries in Russia. The plan also includes significant upgrades. Last summer was closed one plant for processing of Nickel, which was right in the city. He was 74 years old, and he was released into the air annually 400 thousand tons of sulfuric oxide. Production was moved to a complex “Hope”. The second step of the program for environmental protection should be a 75% reduction in sulphur emissions in all sectors. The group wants to 2022 annually to invest two billion dollars in its production. How quickly will benefit from this environment, we still have to see. 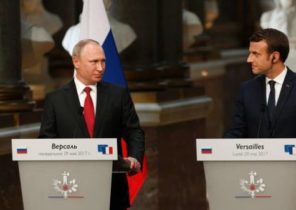 The results of the meeting of Putin and Macron: how presidents discussed Ukraine and Syria 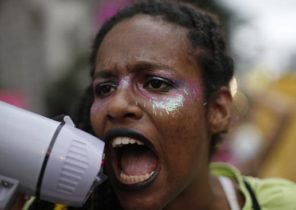