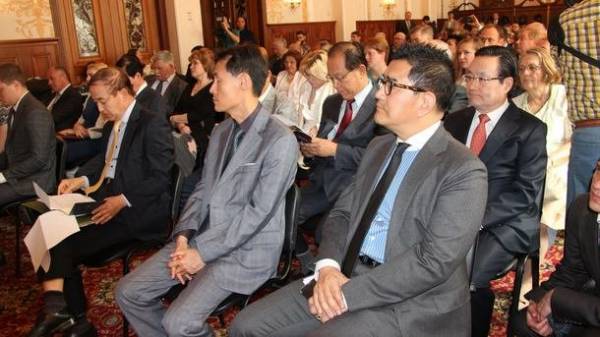 On June, 16-17 in Kiev held a complex mass public events under the slogan “Ukraine – Korea. The Festival Of The Reformation”. South Korea is the latest shining example of the modern reformation of society. After the Second world war and a long stay under the occupation of Japan the southern part of the Korean Peninsula was in a state of decline. However, after 50 years, it has become an international economic leader and now one of the ten largest economies in the world. The South Korean electronics brands, and the automotive industry among the leaders in all countries. No idea about shipbuilding in the 50-ies, today South Korea divides the first three places among the countries – leaders of shipbuilding. Such well-known brands like LG, Samsung, Hyundai, KIA based the Koreans. Korea is in the TOP 5 countries for trading. The average monthly salary increased from 2 to 2500 dollars.

Speakers of the business forum “Ukraine – Korea. The path from decline to prosperity” began Lee Yang GU – Ambassador of the Republic of Korea in Ukraine, Chu Husband’s Key adviser to the President of Korea on security issues and foreign policy, Kim Long gin and was a member of the Parliament of Korea 5 times, ex-Minister of agriculture, Hwang Jo – was a member of the Parliament of Korea 5 times, was Deputy Prime Minister and Minister of education, Shin Lee Ho – Deputy Chairman of the Association of Christian businessmen in Korea, gang Seok Chang – Director, Korean industrial Corporation, John Jong – head of the mission “the Movement of the Holy city.” They shared their thoughts about what led to the economic miracle in a country that was completely destroyed by the war. After the liberation from the occupation of South Korea took one of the foundations of the development of the Christian concept of values. The most important of her deep Christian culture, the development of higher education, healthy competition, family values. Among other factors, and this became the basis of changes in the country, bringing it to the world leaders. Millions of Koreans start my day at 6:00 am prayer in the Church for their country.

An economic miracle possible in Ukraine? The Ambassador of Korea in Ukraine Lee Yang GU sure is. According to him, our country is now at a much better starting position for the development of their economic miracle, than South Korea 40 years ago. One has only to consider an example of this phenomenon, and to repeat it. Correct principles in the economy, politics, business, conscious civil society caused the rise of economy of the Republic of Korea. Christian values based on love for God and neighbor is taken in everyday life, is able to give impetus for the development of a successful Ukraine.

The event was held in the framework of the Year of the reformation, approved by the decree of the President of Ukraine № 357/2016 dated August 26, 2016.