The theme sounds Leninist, and the situation in Serbia is not better than the one that prevailed in Russia before the October revolution. In fact, after overthrowing Milosevic, Serbia has made one of the “October revolution”. At least, that the events described Kostunica. The “revolution” proved fatal for Serbia. Subsequently, the country was looted, sold, destroyed its banking system. Jumped the unemployment rate, and came to power, the servile political elite, which is anti-Serbian “NGO” and “humanitarian organizations” gave the country at the mercy of neo-colonial exploiters. In addition, the collaborationist political elites gradually gave Kosovo and Metohija Albanians. The agreement with Brussels was signed four years ago and was the last — forced — step betrayal of the country, we’ve been more than a decade.

People who are tired of “yellow” (supporters of tadić), voted for former radicals with a revolutionary history, forgiven for the Brussels Pact, to encourage them at the beginning of the Board, and now awaits what will happen next.

From the ranks of the Serbian progressive party (formerly of the Serbian radical party) left the young and most dynamic politician, which eventually turned into a real leader not only because of their abilities, but also due to the fact that in Serbia there was not serious opposition, no credible opposition leader. So it was, and remains to this day.

No matter what the opposition, a new leader cannot be accused of a lack of vigor, needed for solving problems. With the arrival of Vucic has occurred (at least) some progress, especially in the economy, and the people knew it, and confirmed his vote. Besides, everyone knew that a genuine economic recovery is a long process, because it robbed the country to recover is not so easy.

However, just like the economy, the people was important promise Vucic that he will lead Serbia to Europe, even at the cost of losing Kosovo and Metohija. But there were and still are certain limits: first of all Serbs in Kosovo and Metohija need to provide a certain Autonomous status.

For personal and practical reasons, wanting to carry out the policy, for which he received a mandate from the people, Vucic decided to become President of the country. So he obtained absolute power, in fact uniting, albeit informally, two segments of government (legislative, Executive and judicial), while the disunited opposition helplessly watched the scene.

Honestly, today criminalized covered by the economic chaos and collaborationist politics of NGOs of Serbia needs to be a certain kind of enlightened autocracy, which would solve the problems identified. Also the country needs a leader who would be willing to take this power and to devote himself to economic, social and cultural development of Serbia. When such exists (or if there is), the Holy duty of all, including the opposition, will support this man for the good of Serbia.

Vucic have enough energy, and while he does not give reason to doubt that he wants to make Serbia a good thing. However, Vucic is no clear geo-strategic orientation, as it is in modern times the cold war has for the progress of Serbia is crucial.

Vucic maneuvering between the West and Russia, tending to the first. He justifies this inevitability “the European way”, but actually acts on the basis of completely different considerations. But this policy is found more and more flaws that negate all the good which Vucic managed to achieve during his reign.

One consequence of this maneuvering — “peacemaking” Vucic. It resembles the behavior of Prince Myshkin. The hero of Dostoevsky was gentle, kind and insightful as Jesus Christ. But, unfortunately, it turned out that in the Balkan “peacekeeping” Vucic lured Serbia in the succession of humiliations that few could tolerate. Vucic knows that and makes it clear in his interviews. In his statements betrays defeatism in the spirit: “What can you do, they are stronger.”

Our “peacemaker” does not want or does not dare to understand that the West is determined to destroy Serbia, and this is a strategic plan for Euro-Atlanticism.

In this regard, only a blind, mentally and physically, I would not have noticed the following. First, the destruction of Serbia lasted for a quarter century. Apply all means: bombs, demonization, rejection areas and the blackmail of all kinds. Secondly, the statements about the alleged progress toward “rapprochement with Europe” is gaining momentum moral destruction of Serbia. Third, in the framework of the project of the West the Islamization of the Balkans at a fast pace created greater Albania. And this is done primarily at the expense of territorial integrity of Serbia. Fourth, systematically destroyed the Republic of Serbian in the interests of Sharia Bosnia and Herzegovina.

Of course, does not stop the daily humiliation of Serbia. The Albanians to freely compete in this, and the West not only objects, but also encourages them. The West has turned Montenegro, the once predominantly Serbian land, the worst enemy of Serbia. Now the West undertook the destruction of Macedonia in the interests of greater Albania. No one understands — how to put this incredibly may sound — that if Macedonia will disappear with the territorial integrity of Serbia will be finished.

Putin is not naive

Human psychology is an interesting thing. The stronger and more ruthless the West is obsessed by the cold war, strikes on Serbia, the more it is official, the authorities want “for safety” as soon as possible to become part of it. The only catch here is that the West will never accept Serbia. And if I had taken only a very “truncated”, that is if Serbia will be the same as Montenegro, will abandon their faith and writing and begin to hate myself.

On the other hand, Russia, which after Putin came to power, continue to help Serbia and several times saved her from the inhuman humiliation, inconvenient for the official Belgrade.

Putin is not naive and sees that Vucic is still more inclined to the West. However, the President of Russia on-former takes a principled stand against Serbia, although loses her confidence. For example, Russia is supplying weapons, particularly anti-aircraft missile system of Serbia, which has almost become a part of NATO and is clearly going to move in the same direction, so that its military neutrality, at last, became a mere formality. However, it is not good that now when the West is concentrating weapons on the borders with Russia, Serbia behaves in a similar way.

As for the economy, Vucic, as it seems, believes that Russia is vast and distant, and Serbia economically dependent on the West, and that any other geostrategic behavior of Serbia will put it on the edge of the economic abyss (the Western company would be gone, a huge growth to unemployment and the like). Now this practical calculation some facts confirmed, but in fact it is wrong.

Russia is not so far away, and Serbia has the cards.

Those who think that Russia is a vast and far, and who argues that it is difficult to have important economic links (“therefore, it is better to cooperate with the West”), clearly hold people for idiots. America is too far away, and China and so on, but Serbia looks forward to their participation in its economic development. It’s not even worth commenting.

Much more important to eradicate the defeatist view that Serbia, a small country should do what it indicates a strong the world. These “strong” Brussels and Washington, and Russian, of course, too far to be able to effectively defend Serbia. However, this is a blatant lie.

The people gave the imperative mandate Uucico not only in order to bring Serbia into Europe, but also to protect the Serbs in the breakaway state the Republic of Kosovo (ROK) and defend the dignity of the Serbs in Serbia proper! In Brussels between Serbs and Albanians under the guarantee of the European Union was signed the hard and humiliating Treaty, according to which the Serbs in the Republic of Kazakhstan will have the right to unite their communities and the Autonomous status.

The Serbs complied with all its obligations in relation to the Albanians, and they dont want to fulfill a single promise about the formation of the Association of Serbian communities.

Of course, the Albanians do it because they enjoy the support of Brussels and Washington.

Even so, on this example (and there are a great many) it is clear that the West constantly lies and continues to destroy Serbia. It is clear that after a quarter century of relentless destruction and lies Serbia cannot believe what he says to her West. He would never do anything that would be good for Serbia. On the contrary, it is only all the time, blackmails and tears it apart.

So it is time for Serbia said, “Enough!”

The Albanians did not fulfill its obligations. Well. Then we will stop negotiating with them and renounce all that is stated in the Brussels Treaty.

You call your investors. Well, then they will be replaced by investors from the Eurasian economic Union. In addition, we will provide a Russian in Serbia the same status as NATO.

We want to be part of the European Union but also to adhere to military neutrality, to cooperate with all and keep our borders. But you with your arrogance, blackmail and humiliation make us act differently to protect our sovereignty.

Uucico has a historic chance similar behavior to prove to his people and to the world that he is a true statesman, not just the Manager, “Weber” type. Let Serbia show the determination to protect their dignity and strengthening of statehood (after all the limits of the tolerable humiliation far exceeded), and the only way the West will understand that he is dealing with a serious state. No other language but force, the West does not understand. He realizes that forced to make such arguments if you don’t want to lose Serbia. He will have, in particular, to force the Albanians to respect signed in Brussels the Treaty, and to make possible the formation of the Association of Serbian communities.

Otherwise, if Serbia will not show sufficient determination, the West will realize that it is powerless and it can do anything, so I’ll continue to humiliate and dismember the country.

Anyone who claims that the proposed steps are risky and unrealistic, deeply and personally interested in such positions. And those who want to pretend to be Tito, forget that at the crucial moment in 1948, he spoke out against much superior enemy forces, to save their country, and “peace and stability in the region.” 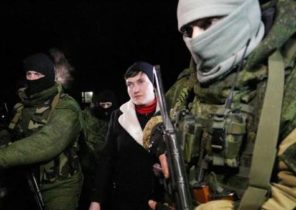 Nadezhda Savchenko has published a list of Ukrainian prisoners of war