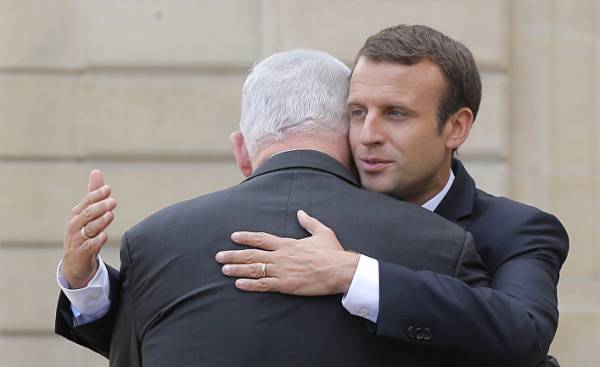 Using an important historical characters and breaking down old taboos, with the risk to maintain a very ambiguous figures, Emmanuel macron says his approach to international politics.

Two days earlier, the President of France honored along with Donald trump century the United States entered the First world war, and Sunday visited with Israeli Prime Minister Benjamin Netanyahu on the events on the occasion of the 75 anniversary of the RAID “vel’ d IV”, when French police arrested more than 13 thousand Jews (including 4 children) for subsequent deportation to Nazi death camps.

“This invitation is a strong-willed gesture that speaks of a long and deep friendship of France and Israel,” said Netanyahu. He began his speech in French, then switched to English and finally concluded felt “Liberty, equality, fraternity” in the language of Moliere. In particular, he noted the heroism of the French, who “risked their lives and the lives of their loved ones to save their Jewish compatriots.”

Earlier, the Israeli leadership has never been invited to this ceremony, even in 1995, when President Jacques Chirac first acknowledged that “France had committed the irreparable” and took the responsibility of the state in the face of the Vichy government. Subsequently, Nicolas Sarkozy and Francois Hollande sought to clearly distinguish the French policy toward the Jewish state in General and the Palestinian-Israeli peace process from the memories of this tragedy.

But that is what puts the macron, which, as it is now with Netanyahu, and previously with trump and Putin, hopes to change the situation, using his ability to persuade and empathize. Maybe even too much.

“We will not capitulate before hate and anti-Zionism, which is a reimagined form of anti-Semitism,” — said the French leader assured that France will continue to work together with Israel in the fight against “obscurantist terrorism and terrible fictions”. These words obviously liking the Israeli Prime Minister.

He often repeated that disagreement with Israeli policies undermines the legitimacy of the existence of the Jewish state, and his country is the main target of international terrorism, which takes in the sights of the entire West. “They’re trying to destroy us and you,” he said.

The stalemate in the peace process

According to the results of the working meeting at the Elysee Palace macron called for the resumption of dialogue between Israelis and Palestinians to find solutions and formation of two States with a clear and recognized all borders and a capital in Jerusalem.

In addition, the continued construction of settlements is a violation of international law and jeopardizes a political decision. Paris is traditionally held the position, and the President reiterated it at the beginning of July the head of the Palestinian authority Mahmoud Abbas. During the election campaign, macron said little on the issue, Recalling only on disagreement with the unilateral recognition by France of a Palestinian state.

In the last months of President Hollande in Paris continued to move the peace process forward and organized this international conference in June 2016 and January 2017.

The Israeli Prime Minister refused to participate in this “against the world” initiative and called her a fake conference, which gave the Palestinians under the protection of France. The new President did not raise this issue. Netanyahu only agrees to direct talks with the Palestinians, in which he takes a position of power.

Anyway, aside from the beautiful photos and warm embrace, the meeting of Him and Netanyahu, not necessarily one that promises something new in the relations between Paris and tel Aviv. So, the French leader assured the Israeli Prime Minister that France will closely monitor the strict implementation of the signed in July 2015 agreement on Iran’s nuclear program. In addition, he said he shared the concerns of Israel about the weapons of Hezbollah (the Shiite Lebanese that the movement receives support from Tehran). 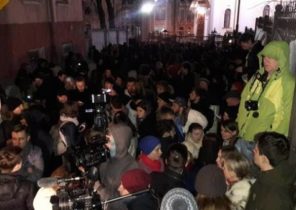