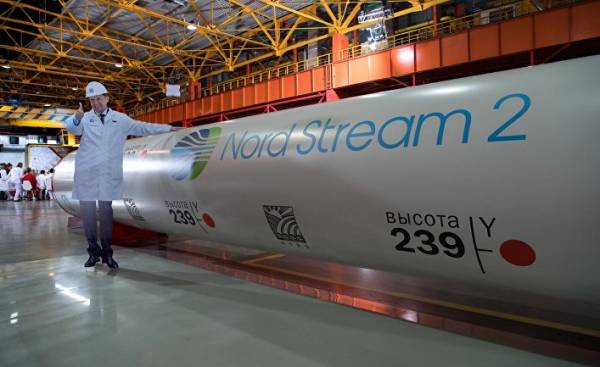 It’s not every day the Prime Minister of Denmark berates EU leaders in the midst of a European summit. But that’s what did Lars Rasmussen (Lars Løkke Rasmussen, the Liberal party of Denmark) together with his Polish counterpart, when last week the EU leaders gathered in Brussels.

Both Denmark and Sweden, as well as a number of Eastern European countries for a year are asked to make such an assessment, but the Commission never provided.

The Prime Minister has demanded to accelerate at the same time, because the Danish authorities in the coming weeks will receive a prompt stating that Denmark has approved an energy project that could potentially have far-reaching consequences on the international political arena.

State-owned gas company Gazprom wants to build 1,200 kilometres of pipeline under the Baltic sea directly from the area of St. Petersburg in Greiswald, on the North coast of Germany.

The decision by Denmark with large political implications

According to the company Nord Stream, the construction of the project, which will cost about 60 billion DKK, should start early next year to “Nord stream-2” was ready to conduct the gas to the end of 2019.

Up to this point the project needs to approve the EU countries, on whose territories the gas pipeline will pass: Russia, Finland, Sweden, Germany and Denmark.

Now there is the gas pipeline “Nord stream 1”, which in 2009 without any problems received from the Danish environmental permit.

The then Prime Minister was also Lars Rasmussen. But now he and his government fear the enormous consequences that the new Russian gas project could have on Europe’s energy market in connection with the relations of Europe and Russia and stability in vulnerable Ukraine.

“The project “Northern stream-2″ shall conform to the rules of the EU for this region. It also has geopolitical significance. This needs to be discussed with the EU. With this question in Denmark cannot figure this out for myself,” said the Minister for foreign Affairs Anders Samuelsen (Anders Samuelsen, Liberal Alliance). Earlier this year he was in Kiev, where they discussed the project with the Ukrainian government.

Ukraine is afraid of the suppression of the economy

The new pipeline in the Baltic sea will double the productivity of the “Nord stream”, so that the Russian gas company Gazprom after a couple of years will be able to pump up to 110 cubic metres of gas directly to Germany, bypassing Ukraine and other Eastern European EU countries.

This productivity is so great that almost fully cover the current need of the EU to the Russian gas.

Nord Stream behind the project, says the aim is to satisfy the expected consumption growth of Europe’s gas in the coming decades. But Ukrainians believe that the real goal is to make them a huge network of pipelines is unnecessary, harm the economy of Ukraine and to split the gas market of Europe to the West and the East.

“Russia is using all possible means to destabilize Ukraine and make it look like an unreliable partner in the eyes of Europe. Now they promote a politically motivated project “Nord stream-2,” which should hurt our economy and crush us,” says Natalia Katser-Buckovski, head of the Subcommittee of the Parliament on the development of fuel-energy complex.

She pointed out that the Ukrainian government will lose the annual income of the equivalent of more than 14 billion Danish kroner, receive for the transit of Russian gas to Europe.

“But this project is also in conflict with EU rules, after all the “Nord stream-2” controls the “Gazprom” — and the production and transportation of gas. This means that Europe will fully depend on the will of “Gazprom” and, therefore, Putin”, — said Natalia Katser-Buckovski.

Independent European experts on energy policy agree with the Ukrainians that Europe is obliged to assess the new gas offer Russian as something more than just business with Germany.

“The”Nord stream-2″ — profitable project for Germany, which wants to become a new hub for transporting Russian gas to Europe. German production and consumers will receive gas at a lower price. But for Eastern European countries it will become more expensive because of the new workaround — and Russia will be able to adjust rates for the East and West independently from each other. This could be the reason for the split,” says senior researcher George Zachmann (Georg Zachmann) from the economic analytical center Bruegel in Brussels.

“The Ukrainians were able to lower their transit fees, if they wanted to be more competitive,” he says. But he agreed that Moscow wants to control the entire flow of gas to the EU.

“This goes against the EU’s open energy market and the fight against monopolies. For example, EU rules state that the producer and Transporter of gas can’t match,” says Sybren de Jong.

This point of concern and the energy Committee of the European Parliament, which recently issued a warning to EU leaders that “Nord stream” undermines energy security of the EU.

“We need a legal assessment. We should discuss what this project means for the stability of Ukraine and EU security. After all, we shouldn’t help Putin to create a new monopoly,” — said Vice-Chairman of the Committee Morten sand Petersen (Morten Helveg Petersen of the Social liberal party), who in February traveled to Kyiv to discuss the matter with the Ukrainian authorities.

Legal evaluation of the project, the Commission still lingers because there are no European rules and laws, which could prevent to result the project in execution. So, in any case, according to the company Nord Stream.

“It is quite natural that such a large project provoked controversy. But all the criticism is politically motivated and not legally,” — said the official representative of the EU Sebastian Sass (Sebastian Sass).

“Energy EU rules relate to the internal market. We are building a pipeline that goes from Russia to the EU’s external borders, to Germany. The path of the gas does not be delivered will be. This means that the project has nothing to do with the internal energy market of the Union,” he said.

A spokesman for the company indicates that “Nord stream-1” and other old pipelines were adopted without any problems with the rules as in the EU and in countries like Denmark.

“Therefore, we believe that the rules are followed this time. When we in a few weeks will send our request to Denmark, we are confident that he will be evaluated from the point of view of legality, not politics. It is hard to imagine that such a law-abiding country like Denmark can do otherwise,” said Sass.

Perhaps the Danish Prime Minister tells Commission it is because leaning to the same outcome.