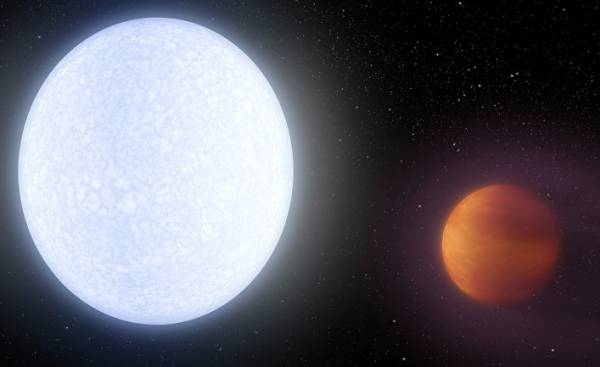 Scientists have discovered a new planet that breaks all records for heat. Planet of the hot gas discovered by using a homemade telescope unassuming. Was discovered piping hot new world.

Planet KELT-9b beats all records with its scorching temperature of as much as 4.6 thousand Kelvin (approximately 4 327 degrees Celsius).

“It is more than a thousand degrees hotter than the hottest planet known. So she’s a lot hotter than the other planets,” says Lars Buchhave, lecturer at the Niels Bohr Institute at Copenhagen University.

He is among the group of scientists who discovered the hot planet, described in the latest edition of the acclaimed scientific publication Nature.

This newly discovered planet can be compared with the other gas giant — Jupiter. Jupiter is the largest planet in our Solar system, but KELT-9b 1.9 times greater 2.9 times heavier and many times hotter.

“It is impossible even to think about some kind of life on this planet. She is so hot that you can’t even rely on the preservation of the molecular bonds. They are broken into parts, so that the gas on the planet’s surface consists mainly of individual atoms,” says Lars Buchhave.

How hot are the stars

MIA Lundqvist (Mia Lundkvist) from Aarhus University is also exploring the hot planets and stars, and she believes the new study “very interesting.”

“Always very interesting, when you open the planet with the extreme characteristics of the planet, not like the others. KELT-9b — just such an extreme planet, she’s much hotter than any other,” says MIA lundkvist, a postdoctoral fellow of the Institute of physics and astronomy, was not involved in the new study.

The parent star KELT-9b — star, around which the planet rotates — also extremely hot: as many as 10 of 170 Kelvin (9 897 degrees Celsius), which is two times hotter than our own parent star, the Sun.

“The idea that this planet receives heat and light about 45 thousand times more than what we get on the Sun here on Earth, is fascinating,” says MIA Lundqvist.

Powerful heat emanating from the parent star is only one of the reasons record the temperature of KELT-9b. Another reason is that the planet is very close to its star. While the revolution of the Earth around the Sun takes a year, KELT-9b is located so close to the parent star, that it on a circular route requires a day and a half.

One side of the planet KELT-9b hotter than the other.

The fact that the planet always faces the same side to its star like the Moon always turned the same side towards the Earth.
On the hot side of KELT-9b temperature is about 4.6 thousand Kelvin (4 of 327 degrees Celsius).

Until now, the record temperature for the planet was 3.3 thousand Kelvin (3 027 degrees Celsius)

The planet can be tail

“When KELT-9b rushes around its star that it might be the tail of a substance is that which, as we know, a comet”, says Lars Buchhave.

“The planet is located so close to the star that bombarded by radiation. This can lead to the evaporation of substances from the planet, with the result that it has a cometary tail. It’s not unusual for planets that are close to their parent stars. But we don’t know yet whether this occurs in this case. At the moment, we only opened the planet itself,” says Lars Buchhave.

Calculations of a new study suggest that ultraviolet radiation (UV radiation) from the parent stars is so great that all of the planet’s atmosphere can evaporate during the life of a star, said MIA Lundqvist.

“But this assessment is inaccurate, since evaporation is a complex process which we do not yet fully understand. So great to discover such planets, KELT-9b, to try to figure out how they are rare or, on the contrary, are common,” says MIA Lundqvist.

How is the temperature

The hottest star with a planet

In recent years, scientists have discovered thousands of exoplanets — i.e., planets, which, as KELT-9b, revolve around other stars and not around the Sun. Only six of the currently known exoplanets orbit stars very hot style, called star class A, and no one planet is still not in even more hot stars of class B.

The parent star KELT-9bs is located on the border between class A and class B, and so it is hot all open stars that have exoplanet.

“Planets are difficult to detect from hot and mean — larger stars, so the planets belong to the hot star, much less openly than those who prinadlejat colder types. These planets are harder to detect, but that doesn’t mean they are not there. Anyway, this planet is proof that planets can exist around very hot stars,” says Lars Buchhave.

How to find planets

From hot giant stars to detect extrasolar planets difficult, and this affects the way that scientists apply to their search.

After all, just to see such a planet is impossible. Open them just because they obscure a parent star, explains Lars Buchhave.

Open it with a small telescope

Despite these difficulties, a new planet has been discovered is not with the most advanced scientific equipment. On the contrary, KELT-9b opened with the help of a small telescope, which, in comparison with many of its giant brethren, it seems almost “substandard”.

The planet was first “spotted” a small telescope Kilodegree Extremely Little Telescope (KELT) North of Wiener Observatory in Arizona in 2014.
The KELT telescope designed for observations of bright, highly luminous stars, while other telescopes are usually designed to study distant stars, which are difficult to see,” explains Lars Buchhave.

“The telescope was designed by the guys from Ohio state. They bought a brand standard lenses and conventional telescopes mass production, so the price is very much different from the cost super expensive giant telescopes”, says Lars Buchhave, mentioning that the biggest telescope on Earth — the European extremely large telescope (European Extremely Large Telescope), which is now planned to build, will cost more than one billion euros.

“It is possible to build 13 thousand observatories with telescopes KELT for the money that will be spent on the European extremely large telescope. It’s funny: normally astronomy is moving toward larger and larger telescopes, but this case shows that there is always room for new discoveries, even if the budget you have relatively small”.