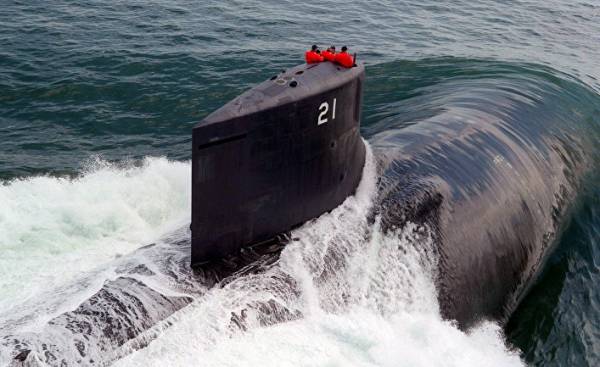 The Navy recently began the development of rocket submarines of strategic appointment of the new class, which will join the naval forces of nuclear deterrence will guarantee the applying the second blow from the ocean’s depths anywhere in the world in the event of a catastrophic first strike on the continental United States.

Technical specification for the construction of a new submarine has been made and the developers began detailed design, having signed a contract for initial production. This was announced by Navy officials.

The designers of a new submarine has moved to the so-called phase B, which includes the initial development with the transition to the final production. The decision to start production is called stage B.

“On 4 January the decision was made to transition to stage B, which gives the opportunity to start designing and industrial designing, as well as to move from preliminary to detailed design,” said Scout Warrior official command representative for the development of naval systems William couch (William Couch).

The Navy began preliminary construction of the prototypes of the ballistic missile submarines of a new type, which will provide peace in the world, possessing immense destructive power.

The programme to replace the submarines type “Ohio” construction must begin in 2021. Work on the preparation of technical conditions, specifications and prototyping are already underway at the shipyard Electric Boat of General Dynamics.

The boat, which will replace the Ohio, will have a length of 170 meters. There will be 16 missiles “Trident II D5”, the launch of which is planned to produce from the silos with a length of 14 meters. The submarine will be unobtrusive and high-tech that will allow it to perform the task of nuclear deterrence, quietly patrolling underwater expanses.

The operational life of the new boats of the “Columbia” should be 42 years. The construction of the first submarine of a new class is planned to be completed by 2028, and to go on active service it will start in 2031.

Representatives of the Navy explained that the boats that would come to replace “Ohio,” will perform the task of nuclear deterrence.

The detailed design of the first submarine of the “Columbia” is scheduled for 2017. New boats will have stealth characteristics and will quietly patrol the underwater spaces, acting as a key element of strategic deterrence, which is intended for applying a second, or retaliatory nuclear strike if attacked with nuclear weapons.

The Navy will create 12 submarines to replace 14 existing nuclear submarines type “Ohio”. The new boat will be a reactor with an improved active area, which will increase its service life.

As the result of submarine type “Columbia” will be able more times to go on active duty compared with Ohio, and thus they will not need the intermediate recharging of the reactor, to reach the end of his 42-year lifetime.

Creating the reactor core for the entire lifetime of the boat, the Navy forces 12 new SSBN will be able to provide the same presence in the sea, which today provide 14 submarines with ballistic missiles. The developers of Navy said that on that basis, is projected to save $ 40 billion on the procurement and costs along its life cycle.

Shipyard Electric Boat and the Navy have made significant progress in its work to create a preliminary prototype, adding missile silos to the compartments of the housing. In this effort, the articulation silos and housing carried out welding work and incorporate details of the boat and also the possibilities for the production of key components of the submarine before final Assembly.

In 2012, the company General Dynamics and its shipyard Electric Boat has received a five-year contract to conduct R & d to develop SSBN “Columbia” worth 1.85 billion dollars. It includes specific incentives to reduce costs and improve production efficiency.

The US and Britain conduct joint work on the creation of the missile compartment for a new SSBN. Together they purchased the items for this room and work with Electric Boat, under contract to 770 million dollars. The US plans to build 12 boats of the “Columbia” with 16 silos each, and Britain intends to create four boats, which will start at 12 mines.

The boats of the “Columbia” will apply next-generation technologies, many of which are taken from percussion submarine type “Virginia”. According to representatives of the Navy, the use of existing systems with those in the ranks of shock submarines that will allow them to integrate most of the modern technologies and at the same time, to save money on new developments.

In SSBN “Columbia” will be applied to wire control system and side-aperture sonar antenna.

The principle of operation of hydroacoustic stations is that it sends an acoustic signal and then analyzes the reflection is defining the shape, location and dimensions of underwater enemy targets.

Navy experts explain that the nose-aperture antenna array has no dome, and that she has a very small hydrophone with a long service life. In addition, the new boat will have 10 years to change the measuring transducers of the antenna array.

Among installed on the “Columbia” combat systems “Virginia” will be the means of electronic surveillance, periscopes, radios and computer systems. These boats will be equipped with the automated fly-by-wire navigation system, which is also available on the submarines “Virginia”. In the computer embedded in the vehicle control system uses algorithms that retention rate and maintaining the depth of immersion, which give signals to the rudders and the stern.

Shafts new boat is designed for 10-12 years and will change in the framework of maintenance and repair. From the currently available shaft service life is six to eight years.

On “Columbia” will also be used a communication system of new generation, the antenna and the mast is “Virginia”. For example, instead of the periscope there will be a camera on the mast, connected to the fiber optic cable. This will allow the boat crew to see the images, not getting up to the scope. Due to this, designers will be able to remove posts of control in large sections of the ship, and divers will still see the surroundings using the camera on the mast.

For “Colombia” also developed a new electric motor that will twist the shaft and the rotor of the power plant. Thanks to the new engine, the power plant will become more efficient, which will also give combat advantage.

Lawmakers intend to create a special Fund to Finance the costly work for the construction of ballistic missile submarines of the new generation.

Members of Congress at recent hearings discussed the details of this established in 2015 Fund. It is designed to target the allocation of funds for development and construction of new submarines. Just hope the Navy to buy 12 new SSBNs, which will serve to 2085 years and even longer.

In the Navy I hope that the rest of the submarine will cost 4.9 billion dollars each (in 2010 prices).