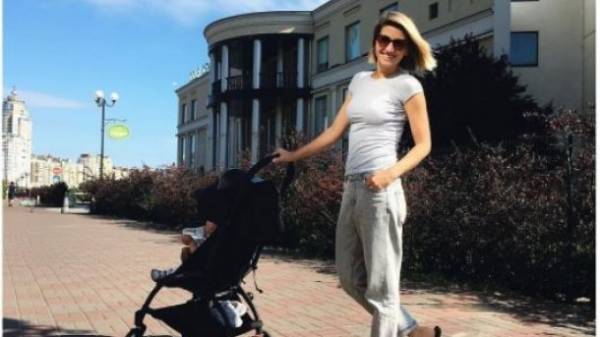 The birth of a child is a very important process in every woman’s life. Changing not only the lifestyle of a young mother, but major changes occur in her body and transforming the body.

How faster to come in physical form and to properly restore the female body after childbirth, said WoMo.com.ua fitness coach Anita Lutsenko.

According to the young mothers after a caesarean the muscles employed.

“I used to think that during a cesarean muscle is cut, and you will never be able to swing a press. It turned out that the cut skin and muscles apart with your fingers. For me it was a revelation. Of course, it hurts the skin, but in this period (after cesarean) should be possible to move a lot,” said Anita.

After natural childbirth the stomach is stretched. He gradually returns to the scene. But before doing the exercises, it is important to check the white line of the abdomen. If the center between the muscles is one or one and a half finger so the white line is converged. If 2-3-4 fingers, it is called a diastasis, and in this case, it is hard to train.

But you need to work hard to return muscles to their natural position. To do this, you can do the bar, “kitty” and vacuum. The exercise is simple, but quite effective.

When can I start training

All depends on the individual characteristics of the organism. To start training it is recommended that three months is the average recovery time after a C-section. Of course, it is important to get the approval of a doctor, without permission, exercise can not be done. In normal childbirth you can start training the abdominal muscles after 6 weeks.

The main rule is not to download the press in the first 1.5 months after a C-section. The exercises for the hands and feet can be done safely. Also do not forget about the intimate muscles. Kegel exercises are very important from the first days after birth. Exercises for intimate muscles should be the same habit as the charge in the morning, like brushing your teeth, as food, as the rest.

“I would like to bring it to the same level in the minds of women is not less important than the waist or buttocks,” says Anita.

The first week after birth

From the first days after surgery, you need to move a lot. If in the first days you start doing it, then you have formed a cushion – it’s called fibrous tissue. If it appears, it is here to stay. Doctors suggest the first day to get up and start walking. Because this roller is the main problem of those who gave birth by cesarean.

“Also from the first day I wore the corset. This brace helps to restore the muscles of the abdomen elasticity, doing part of their job. After cesarean section it prevents the divergence of postoperative suture, holding it in fixed “slinky” state, and thus it promotes faster healing. In addition, the brace will protect the joint from accidental mechanical damage,” – said Lutsenko.

The second important point after childbirth to keep your shoulders back and keep a flat back. When you slouch all the time, it is still a lot of fixing this cushion. Need to strain to straighten your shoulders and start walking immediately a few hours after birth.

Immediately after the operation start of the training dangerous. About a week after childbirth, consult a doctor, you can begin to physical exercise. Exercises after cesarean section in the first days after surgery, consists of several basic exercises mentioned previously that contribute to toning muscles and dangerous surgery for damaged organs.

Full 3 meals per day and snack. No rolls, cookies and kilos of nuts. If you eat a lot of sugar, the skin loses collagen and the stomach stays flabby. It is important not to drink sweet and sugary drinks, even fruit compote. If you want to quickly restore the stomach, tighten the skin, it is important to eat immediately after birth.

What if measures were not taken immediately

With the roller after a caesarean is much harder. Usually, this cushion is very noticeable. And, of course, the lower part of the abdomen do not like girls who have another +5-7 extra pounds. When they will remove this weight, the cushion is virtually invisible.

After cesarean most important thing is to stretch the side muscles. The whole body becomes shorter and the stomach have nowhere to go, he slides out. That is, if the first swing just press you this situation will only make it worse, and if you stretch the waist up exercises, the stomach will have a place where to come back.