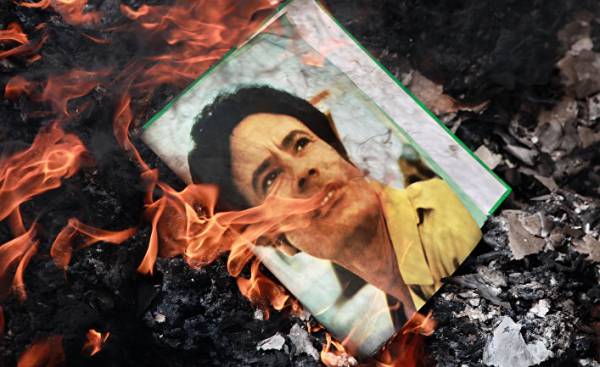 Head of “National sovereignty” in the House of representatives Khalifa al-Daghari said that the time for the release of Seif al-Islam Gaddafi “wrong”. Especially because it happened after the formation of the Committee for dialogue in Parliament for talks with the Highest state Council on amending Shirinskii agreement.

In an interview with “al Jazeera” al-Daghari said that the decision to release has not passed through the courts, and the attorney General has not issued any decision on this issue, thus violating the law of the country.

Libyan political analyst Walid of Artima said that the release of Gaddafi is the culmination of the actions of the revolutionary forces led by Egypt and UAE in Libya, noting that the battalion “Abu Bakr as-Siddiq” known support “operation Dignity of Libya”, headed by major General Haftarot, which are supported by the Cairo and Abu Dhabi.

In addition Intima added that the liberation of Gaddafi may out of General Haftarot, because many supporters of the former regime would prefer to work with Gaddafi’s son, as some see a retired General of the traitor of the late Colonel Muammar Gaddafi.

This step was done to “impact on positions” the Haftarot. The Presidium of the national consensus Government trying to establish control in Western Libya, in particular, referring to the decision on the appointment of Osama Juwali commander of the Western military district, which opposes the operation “Dignity Libya”, and its leader Haftarot.

A former member of the “Political dialogue in Libya,” Ashraf al-Schuch saw in the liberation of Gaddafi’s rise to disagreements in the camp of “Dignity” in Zintan, where the commander of the Western military district Idris MADI, the designated Haftarot. MADI insisted on the extradition of Gaddafi’s son to the authorities of Eastern Libya, while the battalion commander “Abu Bakr as-Siddiq” Ajmi Water released.

Al-Schuh confirmed that Gaddafi’s son takes money and time to begin to lead the political process in Libya, which is currently unavailable due to current circumstances. And besides, he risks to fall into the trap, because he still is wanted by the International criminal court.

Battalion, “Abu Bakr as-Siddiq” has announced the release of Seif al-Islam Gaddafi by the decision of the Transitional government, formed in Eastern Libya, which had offered to pardon him. 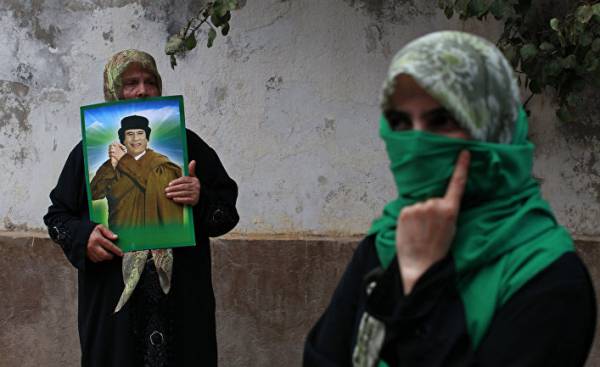 © AP Photo, Dario Lopez-MillsЖенщины with a portrait of Muammar Gaddafi in protest against Aidarov NATO at the Embassy of Hungary in Tripoli, April 2011

Following the release of Gaddafi, the commander of the Western military district Colonel Idris MADI issued an order to disband the battalion “Abu Bakr as-Siddiq”. In the order of the battalion commander reported on the transition of all personnel, equipment and weapons at the disposal of the district headquarters.

Battalion, “Abu Bakr as-Siddiq”, which is one of the armed groups controlling the city of Zintan in the South-West of Tripoli, has published on his page in Facebook the announcement of Seif al-Islam was released on Friday evening, in accordance with the law on General Amnesty declared by the Parliament in Libya. “We decided to release Seif al-Islam. It is completely free. We confirmed that he left the city of Zintan after the liberation,” reads the statement of the battalion. He was not seen in public until now.

According to the BBC lawyer Khaled al-Zaydi confirmed the news of the release of Gaddafi, but refused to disclose his whereabouts, while the BBC referring to its sources said that Saif al-Islam went to Tobruk in Eastern Libya. The international criminal court in the Hague refused to comment on this information, because Gaddafi is wanted on charges of crimes against humanity.

Seif al-Islam was released in July last year under the Amnesty declared by the Libyan authorities who are not recognized in the Eastern part of the country. But the Libyan national consensus Government quickly declared that the Amnesty could not be applied to people accused of crimes against humanity, such as Saif al-Islam Gaddafi, who issued an international warrant for the arrest and sentence of the death penalty in Tripoli.

The Libyan government at the international level, challenged the fairness of the judicial process of the International criminal court over Saif al-Islam Gaddafi, who was arrested in November 2011, the opposition fighters in Zintan.

The international criminal court in 2011 issued arrest warrant for Gaddafi on charges of crimes against humanity. He played a key role in the implementation of the plan developed by his father and aimed at the suppression of the popular uprising by all means.

In July 2015 he was sentenced in Tripoli to death for the bloody suppression of the uprising in 2011, which was condemned by the UN and various human rights organizations.

Despite the fact that Seif al-Islam Gaddafi had no official position in Libya, he has participated in international negotiations, particularly in discussions of agreements on compensation to the families of the victims of the bombing over Lockerbie and the terrorist attack on 10 September 1989 at the plane DC-10 flight UTA-772 (explosion over the desert Ténéré in Niger — approx. ed.). He also was the center of attention in the history of the Bulgarian nurses, who were released in July 2007 after he was held in a Libyan prison for over eight years. At the beginning of the Libyan revolution in February 2011, Saif al-Islam was active trying to save the dictatorial regime of his father.

On the other hand, military and civilian councils in Zintan condemned the decision to release Gaddafi under the pretext of implementation of the law on Amnesty, which has nothing to do with legal procedures. They released a joint statement that those who broke out, Saif al-Islam are complicit in the crimes of traitors of the blood of martyrs and the military unit to which they claim to belong. And they accused the “Council of Zintan” help in the release of Seif al-Islam. Previously they stated that they are not responsible for this decision.

“Masterchef. Professionals” who left the project in 15 weeks