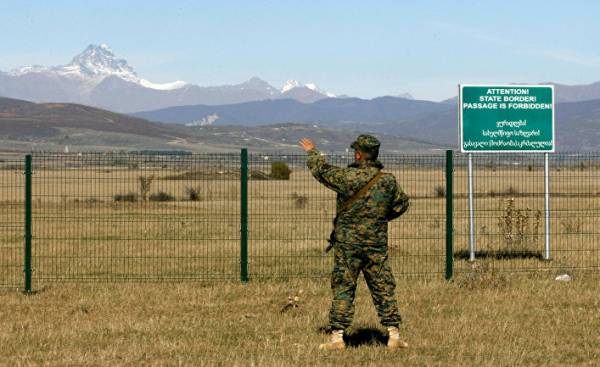 After the recent parliamentary elections in Abkhazia, the election byvshego of the speaker of local Parliament Anatoly Bibilov as the new President of South Ossetia and referendum about changing the name to South Ossetia-Alania (residents supported this proposal) the international community in the West, reiterated that it supports the territorial integrity of Georgia. To the same diplomatic representation that Sukhumi and Tskhinvali are an integral part of Georgia and calls on Moscow to comply with the agreement that ended the August 2008 war, adding tools that will allow you to achieve concrete results on the path to unification of the Georgian lands.

Russia does not let go

The Kremlin is taking another step to strengthen ties with South Ossetia and Abkhazia, however, has not been enthusiastic about the idea of the Ossetian referendum on joining Russia. No benefit for Moscow in this. Such a move will only cause international outrage and will give a pretext for the preservation of anti-Russian sanctions. So the President Bibilov, apparently under pressure from Moscow, said that the implementation of the agreement on Alliance and integration Tskhinvali and Moscow will in practice mean the inclusion of Belarus into Russia, thereby giving to understand that the subject of the referendum is deferred indefinitely.

In mid-April, Abkhazia was visited by the Minister of foreign Affairs of Russia, which thus once again trampled the territorial integrity of Georgia. He expressed the hope that in the near future, Sukhumi and Tskhinvali will be signed with Tbilisi agreement on the nonuse of force. Georgia, which does not recognize the independence of Abkhazia and South Ossetia, does not want to sign such document and insists that a party to this contract shall be the Russian Federation.

In the Georgian-Abkhaz relations occurred, however, a new problem. It concerns of Georgians without Abkhaz citizenship, who live in the Gali district of Abkhazia, on the border with the main Georgian territory. The Abkhazian authorities began to issue them a residence permit for a period of five years, which allows you to keep the Georgian citizenship, to reside on the territory of Abkhazia to cross the border with Georgia. Holders of residence permits have the right to sell their private property, but will not be able to buy it. Georgians who wish to obtain such a document, must prove that they lived in Abkhazia for at least ten years in the period after 1999. Who wish to obtain Abkhaz citizenship, will automatically lose Georgian. Meanwhile, the lack of citizenship deprives the Abkhazian Georgians in the separatist Republic active and passive suffrage.

Abkhaz passports to Georgians in the Gali district stopped issuing in 2013 and 2014 they lost the right to participate in any elections. This strategy of the Sukhumi authorities is designed to prevent “assimilation,” a seemingly threatening Abkhazia. According to the 2011 census, on the territory of Abkhazia (primarily in the Gali district) is home to 46 thousand ethnic Georgians is 19% of the population of the unrecognized state.

The confident voice of the Council of Europe

In the second half of April at a meeting of Deputy foreign Ministers of the member countries of the Council of Europe the Secretary General of the organization Thorbjorn Jagland (Thorbjørn Jagland) presented the fifteenth report on the conflict in Georgia. The document extends the travel ban to the Council in the separatist Republic. In General, the situation in the occupied territories named in the report stable and calm, however, it sounds concern about the closure of several checkpoints on the border between Abkhazia and the main territory of Georgia. Negatively assessed also the process of “bordersize”, that is, the construction of fortifications on the border that separates the Georgian territory from the separatist republics, which are Russian border guards. The report also draws attention to the fact that in the eleven schools of the Gali district stopped teaching in the Georgian language. In conclusion, the document States support for the sovereignty and territorial integrity of Georgia.

Washington on the side of Tbilisi

The policy of Georgia against South Ossetia and Abkhazia was also supported by Washington. In early may, thirty members of the U.S. house of representatives from the Republican and Democratic parties sent a letter to Donald Trump on the occasion of the 25th anniversary of the establishment of diplomatic relations between the two countries. They pointed to the gains achieved over the past quarter century, and urged the President to support Tbilisi in its efforts to integrate with NATO, as well as to continue negotiations on the us-Georgian agreement on free trade.

In addition, the House of representatives has drafted a law prohibiting American power to help countries that recognized the independence of Abkhazia and South Ossetia, or to Finance any kinds of projects, helping to strengthen the Russian occupation of these territories. In the document that have already signed Donald trump said about the financial assistance to the countries of “Eastern partnership” opposing Russian aggression, and support the implementation of Association agreements and free trade with the EU.

Finally, on may 8 in Washington, met trump and Vice-President Mike Pence with the Prime Minister of Georgia Giorgi Kvirikashvili. The next day, the head of the Georgian government met with U.S. Secretary of state Rex Tillerson. During these meetings, both parties stressed that the us-Georgian strategic partnership remains strong. The American side supported the territorial integrity and sovereignty of Georgia and Tbilisi’s aspirations to integrate with the EU and NATO. In addition, we signed important cooperation agreement in the field of security that will allow the two countries to exchange intelligence and strengthen cooperation in the fight against terrorism. The agreement also aims to help the transformation of the Georgian armed forces and to promote their compatibility with the armies of the countries-members of NATO.

Steps of the Committee of Ministers of the Council of Europe and the American leadership will not change the situation around Abkhazia and South Ossetia radically, however, are an important signal to Moscow. They indicate that the Western public come to terms with the fact that the Russian occupation of the separatist Georgian Republic. In recent years the interest of the West to Georgia declined, however, now the Georgian diplomacy managed to achieve undeniable success. The actions taken by the West, especially Washington, can give tangible results in the issue of Abkhazia and South Ossetia.