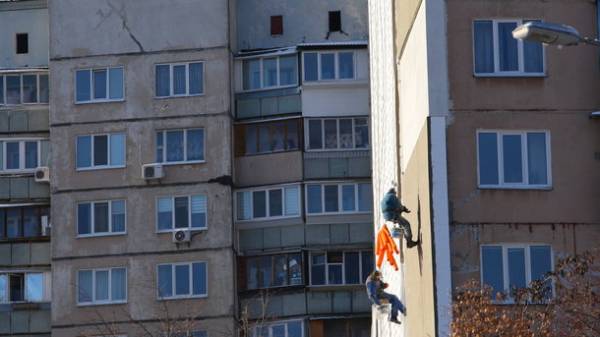 The rise in price of power resources has forced the Ukrainians to reflect on how much money is lost due to the cold walls, drafts and Windows with cracks. Considering this and power – in Ukraine for almost three years, a program of the so-called “warm loans.” The aggravation of the gas conflict with Russia in 2014, the Ukrainian government launched measures to support the population in the implementation of energy efficient technologies. Basically we are talking about the insulation housing and the purchase of solid fuel boilers, writes Deutsche Welle.

According to the Agency of Saee of Ukraine, as of August 28, for the duration of the program “warm loans” they have used almost 320 thousand families – amounting to nearly 4.2 billion USD. Among them – more than a thousand associations of condominiums (ajoah), where 80 thousand families. For the first eight months of the current year amount of loans disbursed exceeded the total funding provided in 2016 and made nearly half a billion hryvnia.

“The issue of crediting in modern conditions is not credible in the community, so we can say that this is a positive aspect in the implementation of energy saving policy in the housing Fund”, – commented the expert on housing and energy programs of the Civil network OPORA Yuliya Cheberyak.

In monetary terms, most loans over the years, the program has started in Lviv region, almost 380 million hryvnias. Somewhat less – in Kiev and Kiev region. Three leaders closes the Sumy region, where loans took 310 million. Less – in the South of the Nikolaev and Kherson areas, and also in the Luhansk region. The average across the country of about 175 million.

“Insulation is the most expensive as installation of boilers. These measures – high cost and high payback period”, – the expert explains “the Association of energy auditors” Victoria Kovalenko. However, she notes, they are the most effective.

From the start of the programme, the government, along with USAID and IFC is conducting a survey to assess the effectiveness of its implementation. Today, available data for the heating period in 2015. They indicate that the average heat savings in households and condominiums accounted for approximately 125-190 cubic meters of gas per month for a private home, thanks to the wall insulation or the installation of non-gas boilers. Almost all participants say about the positive effect of the program, says the head of the state examination of Saee Roman Marecki.

However, experts advise to start thermal modernization with the so-called energy audit, in which experts will evaluate how best to provide conservation of heat and conservation of resources in each case.

“For each building a set of activities is determined individually and is usually on the list of works, the amount of money and payback time,” adds Cheberyak. However, the owner is free to decide what to do and what exactly should take the credit.

The state financially supports citizens who decide to do it, and reimburses up to 40% of the loan, but not more than 14 thousand hryvnias, according to the website of Saee. Funding is provided through state banks.

At the start of the program, many Ukrainians feared to take a “warm-credits” – for the first 11 months of credits issued only about 23 thousand families. The total amount totalled only 400 million hryvnias, and on Internet forums, citizens expressed concerns that the state may “throw”, as it was with the program of youth housing loans. After the first wave of government support of mortgages financing almost stopped, so the debt burden is completely laid on the borrowers.

The timetable for the provision of public funds for “warm credits” for 2014 – 2017 is also reminiscent of the stage. Due to high demand the government money ended in the middle of a budget year, so the program was stopped. For example, this year until March the funds for the loans are very slow due to the harmonization of procedural issues. However, continue to operate programs in the regions.