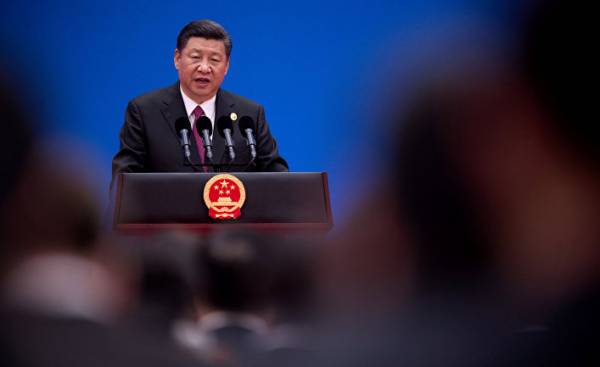 In may this year, the head of China XI Jinping chaired with great pathos the forum “Belt and road” in Beijing. The two-day event was visited by 29 heads of state, including Russian President Vladimir Putin, and also 1,2 thousand delegates from more than 100 countries. Chinese “Initiative “Belt and road”” XI Jinping was named “project of the century”. It involves 65 countries, their area is two-thirds of the earth’s surface and its population is approximately 4.5 billion people.

Plan President XI Jinping first announced in 2013, involves the integration of Eurasia through investment in the amount of a trillion dollars in infrastructure, occupying the territory from China to Europe (with branches in South-East Asia and East Africa). It is called the new Chinese Marshall plan, as well as a claim to “Grand strategy”. In addition, in the last forum, some experts saw the sea trying to fill the vacuum created after the failure of Donald trump from the TRANS-Pacific partnership — a trade agreement signed by Barack Obama.

The ambitious initiative of China can give poor countries a much needed highway, Railways, pipelines, ports and power plants. It also aims to encourage investment of Chinese companies in European ports and Railways. The actual “belt” is a wide network of highways and Railways across Central Asia, and “by” — sea routes between Asia and Europe and associated ports.

Marco Polo would be proud of. If China decides to send their abundant financial reserves to build the infrastructure that will help the poor countries and expand international trade, then actually we can talk about what this country provides a global public good.

Of course, the Chinese motives are not pure charity. The redirection of large reserves of China in high-yield infrastructure investments instead of low-yielding US treasuries looks reasonable, and, in addition, contributes to the creation of alternative markets for Chinese goods. Chinese steel and cement companies are now suffering from overcapacity, the construction company of the country will also be able to capitalize on these new investments. In addition, the Chinese industry moves to distant provinces, so improving their infrastructural linkages with international markets meets the needs of China’s development.

But whether the project “Belt and road” more of a PR smoke than flame investment? According to the newspaper Financial Times, last year investment in the initiative, XI Jinping, has declined. There are doubts about whether commercial enterprises interested in the project as well as the government. Each week five of the heavily loaded trains depart from Chongqing to Germany, but only one returned with the same amount of goods.

Transportation of goods overland from China to Europe still costs twice more expensive than trade by sea. According to Financial Times, the “Belt and road” was, “unfortunately, to a lesser extent practical investment plan and more political concept”. In addition, there is a danger of building up debt and outstanding loans due to projects that threaten to turn into an economic “white elephants”. Conflicts and problems in the field of security can create significant challenges for projects that cross so many national borders. Finally, India is not happy that China is increasing its presence in the Indian ocean, and Russia, Turkey and Iran have their own plans in Central Asia.

The concept of XI Jinping’s impressive, but how it will be successful as a “Grand strategy”? China relies on old geopolitical theory. A hundred years ago, the British theorist of geopolitics Halford Mackinder (Halford Mackinder) argued that the country that controls the island of Eurasia will control the world. On the contrary, the American strategy has long been based on the geopolitical ideas of the nineteenth century, Admiral Alfred Mahan (Alfred Mahan), which focused on sea power and the peripheral countries (rimlands).

At the end of the Second world war, George Kennan (George F. Kennan) used the approach of Mahan for the development of its strategy for deterring the Soviet Union during the cold war. He argued that, having entered the Union with the Islands of Japan and Britain, and also with the Peninsula in Western Europe, which are located at both ends of Eurasia, the U.S. will be able to shape the global balance of power favorable to American interests. The Pentagon and the state Department is still organized in accordance with these principles in Central Asia they pay very little attention.

In the current era of the Internet things have changed, but the geography is still of great importance, despite all the talk about the disappearance of distances. In the XIX century main geopolitical rivalry concerned the “Eastern question” — who will control the territory of the crumbling Ottoman Empire. Infrastructure projects like the railway Berlin — Baghdad, led to the growth of tension in relations among the great powers. Come now, to replace the erstwhile geopolitical rivalry between the new “Eurasian question”?

Starting the project “Belt and road”, China has relied on Mackinder and Marco Polo. But the emergence of a land route through Central Asia will launch a new “Great game” for influence, which in the XIX century was embroiled Britain with Russia and the former Empire of Turkey and Iran. At the same time, the marine “way” through the Indian ocean will exacerbate the serious rivalry of China and India: draft of Chinese ports and roads through Pakistan has led to increased tensions.

The US increasingly rely on Mahan and Kennan. In Asia there is a balance of power: India, Japan and Vietnam do not want the dominance of China. They consider America as part of a possible solution. Yes, America is not pursuing a policy of containment of China, are evidence of the huge flows of goods and students between the two countries. But China, keen on ideas of national greatness, became a party to territorial disputes with neighboring coastal countries, thus pushing them into American hands.

Indeed, it is self-containing and is a true problem in China. Even in the era of Internet and social networking the most powerful force here is nationalism.

Overall, the United States should welcome Chinese project “Belt and road”. As said Robert Zoellick (Robert Zoellick), former U.S. trade representative and world Bank President, if a rising China will promote the provision of global public goods, then the United States should help the Chinese become “responsible stakeholders” of global processes. Moreover, American companies may be able to capitalize on the investment under the “Belt and road”.

The US and China can greatly benefit from cooperation in various transnational issues: monetary stability, climate change, road cybertravel, the fight against terrorism. The project “Belt and road” will give China a certain geopolitical advantage (and associated costs), but it is unlikely he will be a radical shift in the framework of “Grand strategy”, which some analysts say. However, there is a more difficult question: whether the United States to fulfill its part of the job?