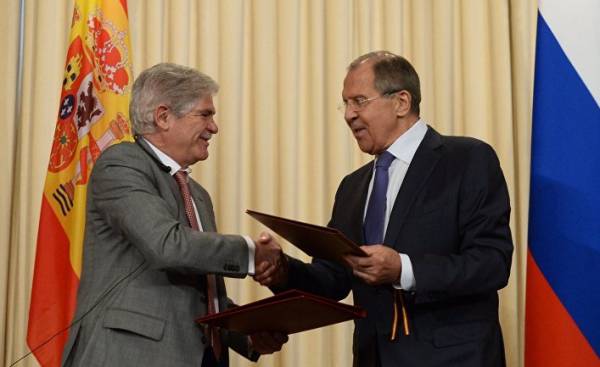 The Minister of foreign Affairs of Spain Alfonso Dastis (Alfonso Dastis) on Wednesday called for a proposal to conduct against Russia a policy of “dual approach”, which would be to establish a dialogue with this country while obligations and the preservation of solidarity with members of the European Union.

“Spain believes that the EU needs to conduct a dialogue with Russia, which is a strategic partner in addressing global problems that affect us all and to decide that no Russia will not succeed,” — said the Spanish Minister, mentioning the fight against terrorism and climate change. In the framework of the Alliance, Spain is also in favour of the resumption of work of the Council Russia-NATO.

On Wednesday, Dasti made the first working visit to Moscow, where he held talks with his Russian counterpart Sergei Lavrov, with whom he had met at the December 2016 in Hamburg at a meeting of the Council of foreign Ministers of the OSCE. Foreign Ministers agreed on a plan for political consultation on the 2017-2018 years, involving meetings between the state secretaries and Deputy Ministers to discuss issues of energy security, bilateral, European and Latin American problems.

During a joint press conference with Lavrov, head of the Spanish diplomacy said that the meeting with his Russian counterpart was a “very pleasant” and “very constructive” and that the Spanish-Russian relations are “going through a good moment.” For its part, the Russian Minister praised the talks as useful and have called Spain a long-standing and reliable partner. However, he noted that, unfortunately, the Spanish-Russian relations are held hostage to the difficult situation on the European continent, and “in these circumstances we aim to do the maximum possible in order to preserve the accumulated capital of the partnership and not allow you to harm him”.

After Dastis spoke about the solidarity of Spain within the EU, Lavrov expressed the view that it is implemented somewhat one-sided and based on the smallest denominator, which, according to Lavrov, is characterized by the position of a very “aggressive minority”.

The trip of the Spanish Minister to the Russian capital was carried out in the framework of the political practices of the countries-EU members, which are constantly building up contacts with Russia, are significantly affected in 2014, as a result of the annexation of Crimea and support for separatists in Eastern Ukraine. This year Moscow was visited by the President of the Senate of the Cortes Generales of Spain, PIO Garcia-Escudero (Pío García Escudero), and at the end of may — the Minister of energy and tourism, Alvaro Nadal (Álvaro Nadal), which, together with Russian energy Minister Alexander Novak held a meeting of the intergovernmental Commission.

Dasti said that the lifting of sanctions imposed by the EU against Russia in connection with its policy towards Ukraine depends on significant progress in implementing the Minsk agreement, the basic document for settlement under the auspices of the OSCE conflict in seeking to separate areas in the East of Ukraine.

“I hope that these agreements will be done and we will be able to take a step towards the lifting of sanctions,” — said the Spanish Minister, calling sanctions “an inconvenient for everyone.” June 20 Dastis will pay an official visit to Kiev.

On the question of Russia’s position concerning plans for Catalonia to hold a referendum on independence, Lavrov said that “the processes in Spain, as in any other country” should “be based on the laws of the respective state obligations under international law”.

The Ministers reviewed the conflicts in various parts of the world, especially in North Africa, the middle East and in Libya. Speaking about Syria, Dastis confirmed the commitments undertaken in the framework of the Geneva process, and referring the Libyan theme, expressed their concern and desire to “prevent the process of disintegration”. Commenting on the situation around Qatar, established in connection with the rupture of relations with Saudi Arabia and other Persian Gulf States, the two Ministers called for dialogue. Lavrov said the crisis is a bilateral issue and declared that “any aggravation of the situation in the region highly dangerous.”