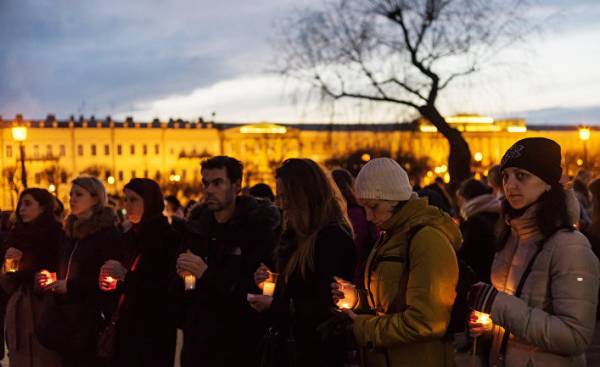 World leaders have condemned the third in a short time act of terrorism in the UK. The question is, what specifically can be done. And Donald trump, and Vladimir Putin recently spoke about the need to assemble an international force to fight terrorism. Presidents can be encouraged to unite in combating terrorism.

Apparently, on the battlefield, the days of ISIS (a terrorist organization banned in Russia — approx. ed.) are numbered. But this does not mean that terrorism will stop. Small network of lone-wolf terrorists and their local cells that are ready to organize all sorts of terrible crimes, for example, in European cities, will not stop with the fighting. Even when ISIS will have to surrender, first in Mosul and then raqqa, there will still be actual difficult task: to put an end to the attacks.

The leadership of ISIS is going to regroup and go for positions that are now under less pressure. And while there is the current leadership and structure, nothing will change. To destroy ISIS to the ground, the international community must reach its funding sources, infrastructure and communications. We are talking about the common efforts on a broad front, since terrorism penetrates through national borders.

The task may seem hopeless, given the shallowness and shamelessness peculiar to the current wave of terrorism. To reach individuals who are inspired propaganda and primitive instructions in the manuals on terrorism on a variety of terrorist forums is limited.

At the same time, the constant repetition of attacks may blunt the response to them. The bloody events will become a part of everyday life, and then the normal state of things. Discussions revolve around the constant maintenance of balance between strict supervision and the risk to violate the privacy of people.

When Theresa may in Downing street said “it is now exactly enough” (enough is enough) and demanded that international agreements against the proliferation of extremist and hateful messages on the Internet and social networks, it was clear that this was not done in a jiffy. You could even say, quite the contrary.

The question now is to what extent the gravity of the situation now reached political consciousness. In the UK may have criticized her rival Jeremy Corbyn (Jeremy Corbyn) because she cut the number of police officers while he was the Minister of internal Affairs of the country. The attack suddenly became part of the British election campaign.

In Sweden the government has made terrorism one of the eight points of the national security strategy, including military threats, “threats to transport and infrastructure”, “health hazards” and “climate change”. All this does not create the impression of hard prioritization.

At the European level the issue of resources to a large extent, for NATO and the size of deductions on defense. The growth of Russian arms and advanced weapons systems and modern military units need to respond in the same coin. This also applies to Sweden.

Donald trump puts the fight against terrorism above all in its agenda. Recently, at the NATO summit in Brussels, a few days after the terrorist attack in Manchester, he continued to promote this line. At the request of the President, NATO has engaged in a coalition against ISIS. Not a word was said about the article five on collective self-defence. Russia was mentioned only as a topic of secondary importance. Among the other NATO members the enthusiasm was moderate.

A week later, Vladimir Putin at an economic forum in St. Petersburg spoke about the consequences of the entry of Sweden into NATO. Putin also responded to what he called “a wave of Russophobia” that swept the world, saying it was hampering the fight against terrorism. Russian President instead announced the search for a “tool” for cooperation between Russia and NATO, in order to be able to “constructively” to defeat terrorism.

So trump and Putin officially stand for international efforts to combat terrorism, regardless of the possible hidden intentions of the rest. At the G20 meeting in Hamburg, which will be held in a month, for the first time the presidents can meet face to face. If they want to achieve the desired convergence, the fight against terrorism may be the simplest common denominator, useful in practice, and for other reasons.