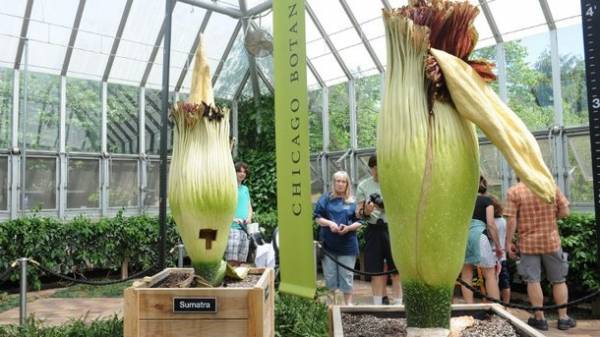 In the Chicago Botanical gardens has blossomed from two representatives of rare tropical plants of Amorphophallus titanum. Its peculiarity is that it emits a very fetid smell, something resembling a mixture of rotten eggs and rotten fish, – the “Popular Mechanics”.

Plant leaves reach a length of 3 meters and the underground part is a giant tuber weighing up to 50 lbs. In a natural environment of rare flower grows only in one place — on the island of Sumatra in Indonesia. Amorphophallus titanum blooms once every 10 years with a duration of only 2 days. The flower emits a foul-smelling scent, thus attracting flies and beetles, which pollinate it. In appearance, the flower resembles a decaying piece of meat.

Chicago Botanic garden has acquired two Amorphophallus Titanic in 2003-m to year. The caretakers of the garden gave them the names Java and Sumatra.