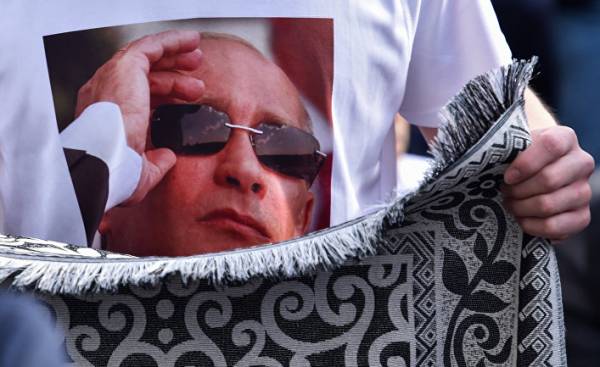 Ten years ago Vladimir Putin declared that the system of international relations after the cold war was fake and artificial. At a security conference in Munich the President of Russia, speaking to Western diplomats have accused the United States that they cause chaos and anarchy, provoke wars in the world, interfering in the Affairs of States, as well as ignoring the norms of international law. Some Western analysts and officials said that Vladimir Putin is the new Russian Tsar. This year on the agenda of the security conference in Munich, the question is: what if the West will collapse? The counting of votes led to a British exit from the European Union and the coming to power in the United States administration trump.

In 2007, Putin described Russia as the victim, but this period is over, and the “victim” has become a country that strongly imposed on yourself as an important player in the international arena. The head of the program “Russia and Eurasia”, Carnegie endowment Eugene Rumer (Rumer Eugene) said: “Russia has established itself as a competitor to the liberal world order, which promotes and supports Washington. Russian diplomats stick to the optimistic point of view about the fact that the U.S. led with trump will be able to restore friendly relations with Moscow. At the same time, sometimes they were skeptical, especially after contradictory statements from American politicians, but also because of the lack of any contacts on the highest level with the President of the United States. Even the negotiations between Rex Tillerson and Minister of foreign Affairs of Russia Sergey Lavrov was organized labor…”

Politician, former MP Natalia Narochnitskaya says, “ended the Golden age of the liberal world order”. However, the West was trying to find a new starting point in relations with Russia. The first escalation occurred during the war in Georgia. In 2014, Russia annexed the Crimean Peninsula, which ultimately led to economic sanctions by America and European countries. Putin has responded with determination to these actions. At the request of the Syrian Arab Republic, Russia introduced its troops into the country in order to help the government fight terrorism…

In addition, Moscow has accused of meddling in the U.S. elections, and two months after the inauguration of the trump on suspicion of having links with Moscow, was fired the national security adviser, At a meeting organized by the official Russian news Agency, two months ago, experts in the field of international politics have expressed confidence that Moscow and Washington can reach agreement, recognizing spheres of influence of both parties. Some Russian experts in the field of strategic studies has pointed out that the decision of the Ukrainian crisis and cooperation to counter global terrorism may become bargaining chips in this deal. High-ranking official in Russia’s foreign policy declared that the administration’s position trump to those who are responsible for the implementation of the Minsk agreement 2015, can contribute to the resignation of German Chancellor Angela Merkel for her tough stance towards Russia.

The head of the Moscow Center for the study of contemporary politics Alex Chesnakov reported that is possible results of the French elections this spring will lead to changes, as presidential candidates of the right is more sympathetic to “Putin’s” Russia. Expert likens the Russian foreign policy of the Siberian bear, which has not the slightest desire to leave their homeland. This homeland is a national interest of Russia, and it seems that it stretches even outside the country. In turn, Moscow has revived the relations with the countries of the Middle East, and presented itself as an important partner in the dialogue between the countries of the region, having different interests and goals. Thus was formed the corresponding group of countries, including Turkey, Egypt, Iran, Iraq and even Saudi Arabia… According to Moscow, no country will be able to help in resolving the Syrian conflict as effectively as Russia. France, Italy appeal to Russia for help in resolving the political situation in Libya…

At the same time, Moscow began to actively develop relations with the leading countries, the most developing region — Asia. Russia already has close ties with China, and currently, along with the United States is trying to build relations with Vietnam and India and also supports the populist President of the Philippines. Putin is using the aspiration and desire of the Prime Minister of Japan to resolve territorial disputes between the two countries in order to win over Tokyo, which is an important ally of Washington… It’s difficult… Russia could be an important mediator in the settlement of disputes and conflicts in the South China sea, as well as in the normalization of relations between China and Japan.

One of the major priorities of the Kremlin is Russia’s return to the world stage as an important player. Most of the population of Russia fully supports foreign policy of Vladimir Putin.

The Russian President proved that he is a skilled tactical opponent, which extracts the maximum benefit of all possible worlds with minimal cost… Russia Today is more than ever able to confirm its strong presence at the negotiating table and get the right to vote and the veto… According to analysts, “assuming that the global liberal order collapses, then maybe Russia will have a huge opportunity to increase its presence and influence”. However, this is not the most likely scenario, given the fact that countries that challenge the old system, at the same time trying to copy the structure of the system itself (example is China). It is more likely that due to the strong Russian presence is the destruction and fall of the world system will be reformed and improved, but emphasis will be placed not only on security but also on development.