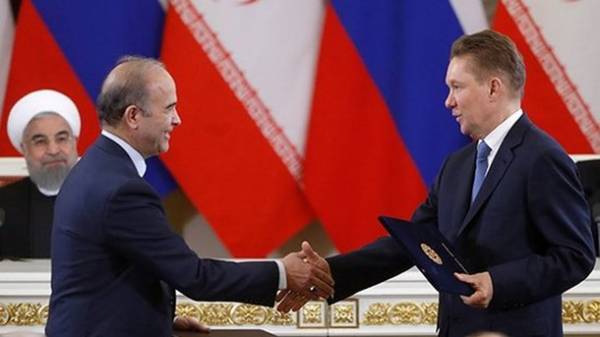 Iran signed the basic agreement with the Russian company “Gazprom” on development of gas field Farzad-B, according to the national Iranian oil company (NIOC), – the “Gordon”.

Earlier negotiations on the project development of Farzad-B Iran has conducted with representatives of the Indian consortium led by ONGC Videsh Ltd.

The text clearly indicates that the Indian media reports that the signing of the agreement between Iran and Russia is a revenge Delhi for reducing purchases of Iranian oil.

The Minister of oil of Iran Bijan Zanganeh said that earlier “Gazprom” has signed the agreement on development of two deposits, “North Pars” and “keisha”.

According to a source RBC in the Ministry of energy of the Russian Federation, in the case of Farzad-B we are talking about the signing of the framework agreement, which “should follow a confidentiality agreement, then a binding contract for the project.” It will be framed as the oil contract of Iran Iran Petroleum Contract (IPC).