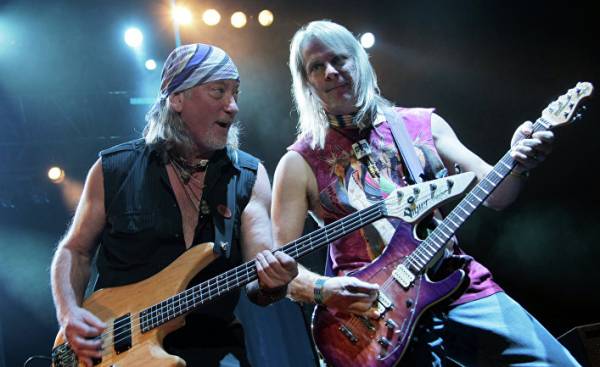 Frankfurter Rundschau: Mr. Gillan, we talk on the phone. Where are you now?

Ian Gillan: In Portugal. I live in England, but I have a small house in the town of Algarve, high in the hills. I come here as soon as me time allows. Here I can relax, and also to work well. In my house I organized a small Studio, and the weather is always mild. This is a place I can recommend every aging rock star.

— An accident. In fact, Deep Purple was constantly on tour. Many have no idea of what it means to be constantly on the go. You just never home. You don’t see your family. Trying to do the maximum during the short breaks. His frequent absence I am compensated for family luxury vacations in the Caribbean or in Spain and also in Portugal. Portugal we liked the most. There I was always rented a Villa up until ten years ago, my Manager drew my attention to the fact that every year I spend so much money on these holidays in Portugal that could pay off buying there own home. So I became the owner of the local estate.

— You have a good relationship with your Manager?

— Absolutely! His name is Phil Banfield (Phil Banfield), and he is my Manager from the late 70-ies. He’s amazing and a good friend. He knows if I can afford a house or not.

— In terms of food, I’m a pragmatist. I’m afraid in case of need, I eat the whole thing. I’m not thrilled with traditional Portuguese food, with its salty dried fish, freshly caught fish can be enjoyed in any form. I especially like a small family business near my home that offers simple cuisine. There you can just eat that every family usually eats for lunch. For example, fish soup with bread, olives and good cheese. Portuguese beer is also highly recommended.

— I ask because miles Davis (Miles Davis) once called the album “Cookin’ with the Miles Davis Quintet” (“Cooking with quintet of miles Davis”). Many musicians say that the music may have much in common with the cooking process.

— Then I have to disappoint you: I never thought of. To date I have written over 500 songs and never the alchemy of cooking did not play any role in this. And even if I know how to appreciate good food, in this respect, I’m more of a prose writer. I eat bread or that I served during the tour. Over the last 50 years that I have traveled around the world with his then group, and I can assure you that from time to time during this tour I was served disgusting food. And despite this, I ate it, because otherwise I would have collapsed. But, of course, often had moments when I suddenly felt mouth brand new taste of excellent wines, exquisite food…

— Deep Purple is considered the first group that went on a world tour of this magnitude. In many cities in South America or Asia, Deep Purple were the first Western group. Did you feel like pioneers?

— Of course, we were one of the pioneers of what is now called world tour. The previous tour I could live with optimism and enthusiasm without prejudice. I know musicians for whom life on tour unbearable. I, on the contrary, today I can not imagine anything more beautiful on Earth. First, we visited places that have not played any other rock musician. We had tours of the Soviet Union, and we were the first Western band that performed concerts in the centers of Chechnya, Dagestan, Tajikistan, and Siberia, in the Urals and in the Soviet Georgia. We were also the first band that was playing in Japan and in many Muslim countries. First and foremost, during these travels I have learned to respect the culture of those countries which were.

— How have you been approached by people, when in those days traveled to such exotic countries?

— Of course professionally we were always focused on our next show. Everything else was subordinated to the concert. This in itself was full of adventure: faulty electrical, language problems, a lost bag of tools — we have experienced all possible dramatic events and disasters. But despite this, we are constantly communicating with different people.

— How in different countries the audience reacted to Deep Purple?

— Completely different. Then in each country there was a Protocol, how to behave the audience during the concert. When we first arrived on tour to Japan, after we played the first song, the audience were really quiet. No one applauded. I remember I thought: they hate us! But then one of them began to clap, a few seconds later all clapped. As if someone flipped a switch. And just as suddenly the applause stopped. Very unusual. But if you’re totally relaxed, such cultural differences are perceived as a result of enrichment. With each successive trip it became clearer: everything is relative, everything is completely different at home than anywhere else. If we are to escape, we will close the others! It would be nice if all could get this experience — then people would become less afraid of strangers.

— Is there a standard program when you are on tour with Deep Purple?

— I constantly strive to new cities and countries. Your free days I always used to see the sights: the Grand canyon in the USA, Taj Mahal in India, the Kremlin in Moscow or the volcano Fuji in Japan. During his second world tour I visited all the museums that I was interested in. And, in the past decades, I was primarily trying to see how many friends I met and made friends in these cities and countries. For me, these tour is actually the only opportunity to see these people again. Last but not least thanks to these meetings, all tour Deep Purple so memorable for me.

— Do you have a travel blog?

I’m a professional diary that records everything associated with the journey and the performance. And since my youth I am manic I write on them little notebooks. I have already hundreds. I write down all the things that could serve as inspiration for my next song. Materials for songs. Excerpts of lyrics for songs. I also write, what was the weather like, and what TV shows I watched — always showing the exact time, channel and place. At the end of the tour, my bags always weigh insanely a lot, because I always buy books on theology, the Sciences, books of Stephen Hawking (Stephen Hawking). Sometimes novels. Which, honestly, has not changed with the advent of e-books. Today I have a large library in pocket format, but I’m still here is still a lot of books home with me.

— If the tour you are such an inspiration, what then is the task of the new Deep Purple album? You need new songs to play?

— As an artist, I have to stay expressive. Writing songs is an activity whereby I persuade himself that still exist. Almost all of them appear from the records in my notebooks.

— Some of your songs — for example, “Child in Time” — are considered the prototypes, determining a genre of rock songs. You know the formula for the perfect rock?

— Phew! In his youth, about rock music, I thought differently than today. But if you have already asked: “Child in Time”, without a doubt, and today remains a strong song.

— So strong that many, including me, turned to techno music.

Ha ha ha! But allow me one remark: when the song came out, there was still iron curtain, the cold war and the Soviet Union. To listen to Western rock music, and the music of Deep Purple, too, was forbidden. Prior to the reign of Russian President Medvedev for many years I have heard from many Russians that they were taught English language with the help of our plates. Songs like “Child in Time”, helped them understand that children on the other side of the “iron curtain” was similar to themselves.

And what does that mean?

Is that the music can carry the components of understanding and peace. And even at the peak of the cold war, the Bolshoi ballet came on tour to London. But at the same time, we must not forget that in fact Deep Purple — instrumental group. The music is always primary. I watched as day by day the music evolves. When we record music, from 10 to 18 hours we have a joint improvisation in the Studio. In 15 hours we take a break. So every day the music is created until, until crystallized song. Then I add to it my lyrics. In fact, we work from the beginning, since 1969.

— You talk a lot about music during the break?

— Honestly, we’re talking about anything but music. If I didn’t see you guys between the two tour six months, then it is quite a long time. Then we talk about our dogs, our cars, our families and children, but not about music. To do this, there’s a simple reason: for the guys writing music is as natural as speaking.

— You now 72 years old, and upcoming tour called “The Long Goodbye” (“the Long goodbye”). This will be your last tour?

— Of course, we talked about a possible date the cessation of the performances. Do we want to define our care themselves? Or wait until someone of us dies? There is a certain feeling that perhaps this will be the last tour, but none of us had been in reality happy. Therefore, we postpone this decision. We plan to play a few more concerts next year. It is difficult to stop something I’ve done all my life. Perhaps this is our last world tour? But also it is clear that we are getting ready to the last chord. We all understand that this cannot go on forever.

— Do you believe in life after death?

Well, you ask the questions! In fact, one of my spiritual achievement is that I came a long way from the atheist to the believer. Today I believe in God. Not long ago I had the experience of awakening, I realized that we humans created God, not Vice versa. We also invented myths and legends. It explains all the mysteries — we have them all up. As a child I asked a priest why some miracles happened in the Bible, and he always replied: “Believe, my son, God works in mysterious ways!” Because I realized that we made him up, I was finally able to relax and sleep since then, as I started to believe in God.