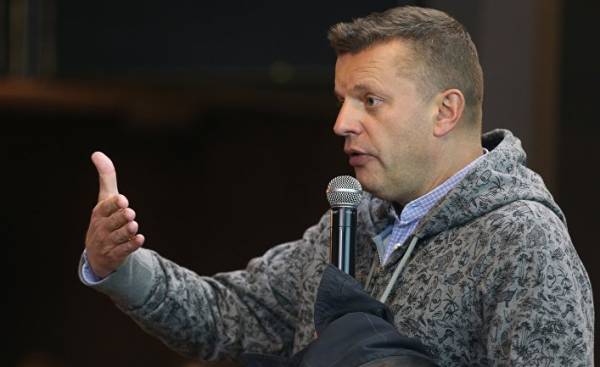 Russian journalist, author and presenter of the program “recently” Leonid Parfyonov in an exclusive interview to TV channel “112 Ukraine” told about his vision of Russian-Ukrainian relations, the possibility to work in Ukraine and Russians nostalgic for the Soviet Union.

“112”: What would you give a title for the plot in the program “recently” about the current situation in the Russian Federation and why?

Leonid Parfenov: It is impossible to do improvisation. So it is impossible. If it was working, I would not go years. Click it does not work. In addition, I have here all the time asking, and I is puzzling: what kind of attitude to Russian-Ukrainian relations and, in General, to give some assessment of the Russian Ukrainian situation. I don’t understand why my opinion (and generally any Russians) should matter to you. You act based on their interests, instead of what the Kremlin or the Russian private person. So I don’t really have a talent to answer such questions.

— Many Russian journalists working in Ukraine. Have you ever tried this option?

— No, not tried on, because I don’t know the Ukrainian situation. I used to work in an environment where for me everything is clear and to the families and I can say it with knowledge of the matter and understand it somewhat better than my audience. Here I was a stranger to myself… Here with me when we talked, but nothing specific was never really offered. Yes, and I think that nothing good would not work. I applied to say to myself: I did not blame or praise those who have chosen this career.

— And did you offer to work for the Kremlin, for example?

— No, I have not received such offers. I work for myself, for your interest in their ideas. I suppose we spoiled that I have so many years of doing just what I’m into and what I want to do. And in this sense to work for someone else I probably would and could not. Already now too late to think of another.

— In Russia, nostalgia for the Soviet past led to its idealization. You feel responsible for the revival of this nostalgia?

Is someone’s nostalgia, and someone — not nostalgia. No, that in Russia in General are nostalgic for the USSR… there are all Sorts of people in Russia: some are nostalgic, some are not. I think that nostalgia is not what we had “Old songs” or “recently”. By the way, “the other day,” many believe the anti-Soviet project that, perhaps, speaks well of the project, once someone is nostalgic, and someone says it’s slander against the socialist system. Someone finds themselves in this kind of a perspective, and someone… All the people who have made a career in today’s Russia (and many millions who have discovered themselves, make money, have a business), I didn’t do it Soviet-style. And certainly not nostalgic. Active Russians can not nostalgia for the Soviet Union, because they look forward, not backward. And they do in the current post-industrial era career (we’re not talking about those who sit on state the tube and sawing the loot there — they did not do this career did, they just got lucky), and you can’t do in the Soviet. It is a vain idea that all of Russia sits and grieves just as well she lived in the Soviet Union.

— Do you think that Russian liberals have the moral right to criticize Ukrainians, as some of your colleagues concerning the ban of social networks?

— People have the right to say anything. Entitled or not entitled — who were deprived of this right? Can somehow relate to one place or the other. It’s your business. It’s you making this decision. And you should be interested in your attitude towards him. You may be, will oppose President Poroshenko in connection with this decree, and, maybe, will applaud. What you should worry about: the Russian liberals and the Russian conservatives about this? That’s the law — the law of a foreign country: she decided, that’s her business. But if she were truly a stranger, what is she then, a country that adopts such a law, to look at someone’s opinion?