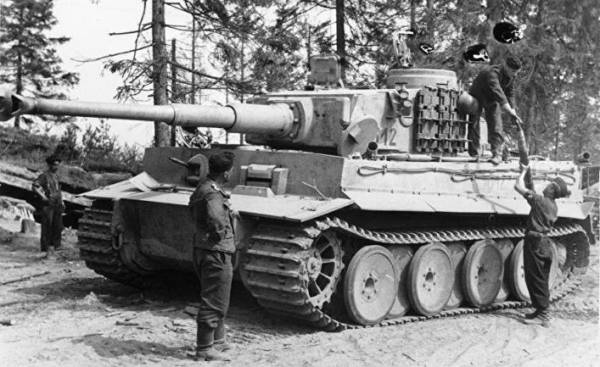 Tank “Tiger” was the worst nightmare for the allies. In addition to its impenetrable armor, he also had fearsome firepower. They in desperation tried a decent answer, until he discovered that a German tank has too many weaknesses.

The earth trembles under the treads of the tank. SS untersturmfuhrer Michael Wittmann (Michael Wittmann) sitting in the gun tower and looking for the next goal.

As usual, the taciturn commander of the tank gives short, precise orders, such as “left”, “target a hundred meters”, “go!”

Around it continues to battle with 2000 German and Soviet tanks on a large field South of the Russian city of Kursk.

In this sector the fighting is almost nonstop for a week, they started on 5 July 1943. This is the largest tank battle in the world, but Wittmann can feel relatively safe in his tower. The fact that the 28-year-old SS for the first time commanded in the great battle the perfect tank of the German “Tiger I”.

That “Tiger” weighs a lot, does not prevent him to react quickly to any threat.

Instead of spending a few minutes to turn the heavy tower, Wittmann in just a few seconds deploys the entire tank.

About 70 other “Tigers” involved in the battle, also inciting a lot of Russian tanks.

Completely destroyed about 700 tanks. Most Soviet and German medium tanks, but the Germans in General, and was defeated at Kursk, the Tigers they lost surprisingly little.

And Michael Wittmann calmly returned to his division. He just proved what it means to be a true tank ACE of Nazi Germany.

But a significant share of his success he owes to the “Tiger I”. From the moment when the tank appeared in the German army in 1942, he proved that he can be a formidable weapon in the right hands.

T-34 could not answer

Hitler ordered the tank in may 1941. In the order mentioned, and sturdy armor, and more firepower, and waterproof housing with snorkel — so that the tank could no problem to cross the river in France and the Soviet Union.

While the engineers worked on a new tank, Hitler in June 1941 left the German army on the Soviet Union.

Breaking resistance, the Wehrmacht soon managed to seize a large part of the country. But, however, there was one area, when Hitler’s army met with unexpectedly stiff resistance.

Almost a year during which the disadvantages of the tank are identified and resolved over and over again — the German engineers could already tell tank forces of good news.

First the Tiger I was ready. The Germans immediately began to educate officers, who were tank to maintain.

When created a new weapon, took care of firepower and impenetrable armor. The giant weighed up to 60 tons, when he had on Board all the necessary equipment and was fueled.

However, it was not much slower than enemy tanks: rough terrain, the tank developed a speed of 20 km per hour. Top speed was two times more.

In the fall of 1942 the “Tiger” were sent to the Eastern front, the Red Army and very soon began to fear his 88-millimeter cannon.

Under favorable weather conditions, “Tiger”, for example, could neutralize the T-34 tank at a distance of up to 2,200 meters. A T-34 at that distance could not answer.

The soldiers began to develop “hygrophobia”

Despite the defeat that the Germans suffered, “Tiger” proved their worth in the battles at Kursk and Kharkov in the spring and summer of 1943.

In the battle for Kharkov, one tank division, for example, destroyed a Soviet tank 501. During the months that lasted the battle, the Germans lost only 18 “Tigers” — and it was not the most outstanding result.

During the war, the Tigers destroyed nearly 10 thousand tanks, and their own losses amounted to 1715. Therefore, the soldiers of the red Army were very afraid of this tank.

Soviet propagandists were trying to raise the morale of enlisted personnel, by sending false reports about the vulnerability of the “Tiger”.

In particular, in the summer of 1943 the Soviet Union announced that the Red Army destroys a day for 10-12 “Tigers”.

And soon the propaganda has been so improbable, that few weeks turned out that the Soviets killed more Tigers than exist in reality.

But Soviet attempts to represent the Nazi tank less intimidating helped too.

Only rumors that they will face with this tank, it was enough to cause the soldiers of the red Army terror.

The British even invented a word for that fear, which engulfed soldiers of the coalition: “hygrophobia”.

Trying to calm the soldier, British field Marshal Montgomery has banned his officers to talk about “tiger” in the presence of privates.

A number of German tank crews also showed that the enemy was not in vain respect the “Tiger”. For example, Michael Wittmann for their first seven months of command “Tiger” destroyed 117 enemy tanks.

33 of the tank removed from the game

The most famous German tank was once again used in combat, when Soviet tank 33 at five o’clock in the morning on 8 January 1944, broke through the German defense line in the Ukraine.

Michael Wittmann immediately went there. Under the command of 29-year-old SS were 12 “Tigers”.

Over the snow-covered fields, I heard the crackling of machine guns, the roar of guns and the noise of engines, but the cloud was low, and therefore visibility in the icy morning was not very good.

Suddenly, from somewhere in the dim light emerged like the Ghost of an enemy tank. Wittmann stated that the shooter took aim. The projectile gun dared the first T-34.

But the tanks got bigger, now Wittmann had a lot of goals to choose from. And “Tiger” was surrounded by a wall of fire.

A shell hit one of the T-34 that he was going to shoot on the German battalion.

Soon thereafter “Tiger” Wittmann direct hit destroyed another enemy tank. It was a surprise for the attacker of a Soviet tank.

Soviet tankers delayed the answer so long that the situation has become fatal. The Germans cut them off, taking them in a pincer movement, and four hours later, 33 of the T-34 and 7 self-propelled guns were removed from the game.

The tank was the worst enemy of himself

But the success of the tank, however, was not enough for Hitler again got lucky on the front. Not helped by the fact that German engineers in the summer of 1944 ensured the front of the first advanced models of the victorious tank “Tiger II” or “king tiger” as it is also called.

The German army all the time retreated in the freezing Eastern Europe, and “Tiger” was not very suited to winter.

He absorbed a huge amount of fuel — 15 liters tank could not overcome more than a kilometer, but if was a tank in the snow or mud, and fuel consumption increased.

“Our “Tigers” and “Panthers” don’t eat hay,” he admitted in desperation, a German officer in the winter of 1944. Another problem the tank was its weight.

They facilitate the suspension, transmission and other vital parts of the tank to the maximum. Uneven terrain, high speed, or long distances often completely incapacitate mechanics. In truth, the “Tiger” didn’t survive very long distances without having to not to fail in the end.

Mechanical issues were a big headache to the Germans, and the allies pretty soon discovered the weak sides of the tank.

In the summer of 1944, British soldiers, for example, found some padded “Tiger” in Italy. The discovery became a sensation in the British army, which was intensively looking for a way to defeat a tank.

Therefore, inspection of the tank were involved in a special group, and in August she presented a somewhat discouraging conclusion in the report “Who killed Tiger?”: He killed himself.

The Wehrmacht tried for years to hide the truth about technical problems “Tiger”. But for the tank mechanics of all time was a big problem.

For example, the tower, which weighed 11 tons, had to be lifted with a crane if I had to change the gearbox.

The road on the Eastern front was bad, you should’ve hit frost like mud froze between tracks. Crews often had to Unscrew the massive wheel to scrape off the ice with them.

Such a repair would take time and in calm conditions. And on the icy field of battle, in the mud, the task became almost impossible.

Many crews of the “Tiger” had bitterly to blow up their expensive tanks and go on foot, not to fall into the hands of the enemies.

All these problems led to the fact that the German tank battalions was never combat-ready “Tigers” in an amount sufficient to ensure that they could decide the outcome of a major battle.

Another problem was the serious lack of experienced tank commanders. Therefore, young and inexperienced officers often received the command of a “Tiger” with a warning: “Be careful, you in the hands of millions of marks”.

Lack of experience commanders often led to the fact that too many “Tigers” broke down because of the congestion.

Often the tanks broke down and weren’t able to go to war. Fortunately for the Nazis, not all the tank commander was incompetent.

For example, Michael Wittmann destroyed on the Eastern front 138 enemy tanks. But even his military luck came to an end.

Thanks to the interrogation of prisoners and examination of captured German “Tigers”, the allies quickly realised that a German tank was not so invincible. Even a single soldier can take the Tiger I out of action, if you know where you have to beat.

The vents could damage or block a projectile.

Peepholes were covered with tempered glass, but still vulnerable to splinters.

The weak point of the gun turret was a place of attachment with the body of the tank. With a successful hit of a shell to turn the tower became impossible.

88-millimeter gun could incapacitate, if the soldier was able to drive into the barrel grenade.

Fuel Bank exploded a charge laid over the rear wheels of “Tiger”.

Caterpillar could incapacitate, laying in front of Tiger mines. Small sprocket in front of the wheels of the tank came off at the hit of most grenades.

The gun could incapacitate with a few strong blows with a metal bar.

Wittmann was killed along with “Tiger”

In 1944 he was sent to northwestern France where the allies on 8 August 1944 began a massive offensive.

Wittmann was sent to help the German soldiers fighting against the superior forces of the enemy, but after only an hour after his tank went into battle, “Tiger” was engulfed in flames.

When the tank exploded inside, the pressure was so monstrous, the tower weighing 11 tons just blew.

Nazi hero killed along with his crew, his death was a real shock to the battalion.

In the following months came to an end most of the “Tigers” were on the move. Some were hit by a massive fire, but most were blown up by the Germans.

Refill as spare parts and fuel was impossible, and the Germans didn’t want their precious tanks were in the hands of the enemy.

When Nazi Germany capitulated, was that the allies will not be able to use the few remaining “Tigers”.

Had too many expensive parts. Therefore, the production of “Tigers” never again, despite his superior strength.

The article is published in collaboration with the magazine Historie.