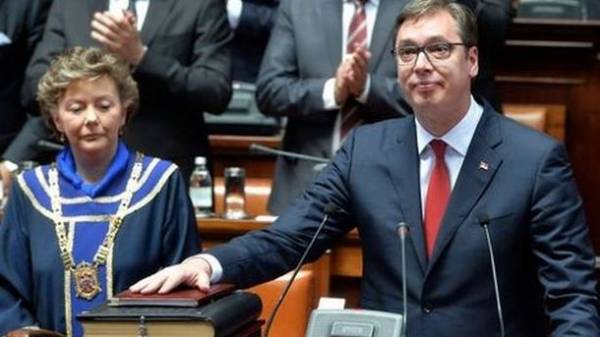 Aleksandar Vucic may 31, was sworn in as President of Serbia at the brief ceremony in Parliament amid protests. It will replace on a post of the President Tomislav Nikolic, reports Radio Liberty.

During the inauguration ceremony of the protesters with the slogan “Against dictatorship” with the support of most opposition parties and leaders tried to pass to the entrance of the Parliament building in Belgrade, but the police blocked their path, clashed.

Later than 31 may, several thousand people took part in the second protest against Vucic in Belgrade which passed without incident.

“I promise to preserve peace and stability, to protect and defend our children’s future,” said Vucic before you leave the Parliament building.

Prior to assuming the position of President survived three years was Prime Minister of Serbia.

We will remind, Alexander Vucic has won the presidential elections on April 2 with a score of 55 percent – almost a year after his Serbian progressive party won the parliamentary elections.

Vucic declares its commitment to the European integration direction of Serbia, at the same time in favour of the country’s close ties with Russia. The position of President in Serbia is a parliamentary Republic, rather ceremonial, at the same time, the party, Vucic is the most powerful in the country.