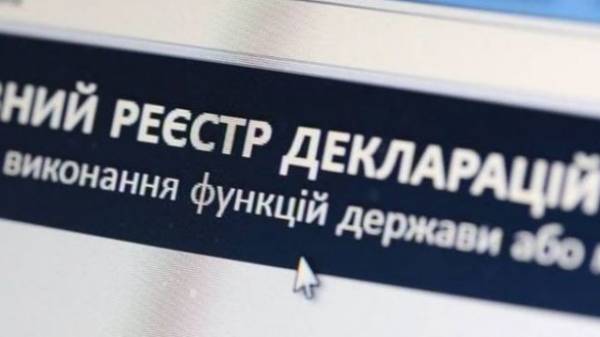 Law enforcers carried out searches in the company “Miranda”, which instead of creating its own system of electronic Declaration for National Agency for combating corruption (NACP) withdraw funds abroad and evaded taxes to the state budget in the amount of almost UAH 1 million. Reports a press about it-service of Prosecutor’s office of Kiev region.

According to the report, the search was conducted by staff of Prosecutor’s office of Kyiv region and the State fiscal service in Kyiv region. Searches are carried out also at the place of residence of the former Director and accountant of that society, whose name in the press-service do not call.

Investigations are conducted within the framework of pre-trial investigation of criminal proceedings under part 1 St. 366 (forgery) and part 1 of article 212 (tax evasion) of the Criminal code of Ukraine. Ex-Director of the company notified about suspicion in Commission of these offences.

“During a pretrial investigation it is established that the former Director of the society, received funds from international organizations for development registry of temporarily displaced persons and the e-Declaration system for NACP, contrary to the contracts, through subcontracting organization which has fictitiousness signs, transferred the funds received to the accounts of the society who is not a resident of Ukraine. During the conversion of these funds into the state budget of Ukraine has not received the required payments and fees for total amount nearly 1 million UAH. It is found that funds received by a non-resident of Ukraine were cashed and used for other purposes,” – said in the message.

The company also in accordance with the agreements was to develop the system of electronic Declaration for the NACP, however, his ex-Director of “attracted to the work of the teacher and young professionals one of the higher educational institutions of Kiev”, made the work of seven young professionals attracted funds were received by only two people.

As reported, the Prosecutor General of Ukraine Yuriy Lutsenko, speaking with the report in Parliament on 24 may, said that soon will visit Estonia in the case of the removal abroad of the head of open company “Miranda” funds allocated for development of the site NACP.

He reported that the fiscal service carried out an investigation about the determination of the winner and the executor of works on creation of electronic Declaration, and found out that there is no competition for the election of such a company was not, UNDP in Ukraine has determined the firm of the Executive means the government of Denmark.

“Director “Miranda”, Mr. Novikov has instructed the execution of these works the teacher of the Kyiv Polytechnic University (national technical University of Ukraine “Kyiv Polytechnic Institute” – Ed.) as well as his students. What they did,” – said the Prosecutor General, adding that the head of the “Miranda” “conceived these tools to assign and evade paying taxes.”

“Thus, the funds that were granted to OOO “Miranda”, was derived through fictitious companies to accounts in Estonia. I just this week, travel to Estonia in order to put an end to this investigation,” – said Lutsenko.