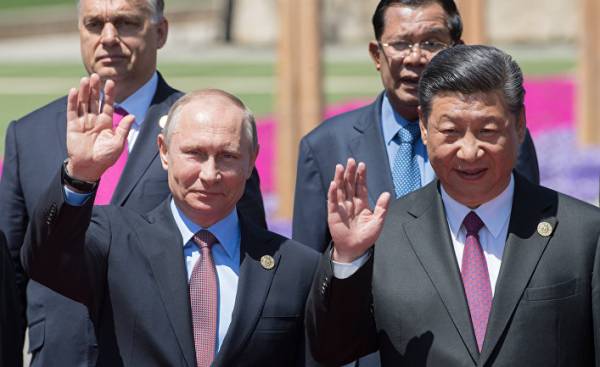 In the middle of this month in Beijing held the first international forum of “One belt, one road”. The event was attended by a large number of heads of different States. Next to the Chairman of the forum, the head of China XI Jinping, sat the President, which was accepted with particular warmth. During the Russian-Chinese summit held on the sidelines of the forum, XI also praised the participation of the Russian leader.

He stressed that the development and deepening of bilateral relations this is a strategic choice. Also si said that the parties must strengthen relationships, standing shoulder to shoulder, and to move forward together, no matter what changes in the international situation.

President Putin also expressed satisfaction with the development of economic cooperation, as well as si, using the phrase “shoulder to shoulder”. He noted that Russian-Chinese cooperation on international issues significantly stabilizes the situation in the world.

During the meeting with Premier Li Keqiang of China, President Putin even called si “our friend”.

XI and Putin are common, including mutual visits. The number of meetings has already exceeded 20. In July, the Chinese leader should visit Russia. There is no doubt that close contact between the heads of Russia and China formed the basis of Russian-Chinese relations, which are characterized as “honeymoon”.

Against this background, in recent years, attention is attracted by the desire of the Prime Minister of Japan Shinzo Abe to get closer to Russia. Barely four months after President Putin’s visit to Japan, which took place in December of last year, as Prime Minister Abe in late April flew to Russia. The meeting with Putin was 17-th. It is now approaching the number of Russian-Chinese meetings.

“Vladimir”. After a meeting in Moscow, Putin and Abe issued a joint statement to the press. Abe called Putin by name, illustrating the closeness of the relationship. However Putin never called the Japanese leader Shinzo.

The main purpose of the diplomatic efforts of Prime Minister Abe toward Russia is to address the problem of “Northern territories” and the signing of a peace agreement. President Putin understands this, and therefore acts very carefully: it shows that a complex territorial problem cannot be an easy compromise.

The Russian leader often puts the example of the Russian-Chinese settlement of the problem of the demarcation of borders: “the negotiations with China took 40 years. In the end we managed to negotiate thanks to the trust of a high level. Unfortunately, we have not yet come to that with Japan.”

At the moment China is the largest trading partner of Russia. The annual trade volume between Russia and Japan make up only one-fourth of the Russian-Chinese scale. “With regard to human exchange, in Russia trained more than 30 thousand Chinese students, while the annual number of students from Japan has only 150 people,” — said the head of the Department of Oriental studies of the HSE Alexey Maslov.

Russia and China there are confusing aspects in the field of economic cooperation and international problems, however, if we consider the results of the voting in the UN Security Council, it becomes clear that China has never cheated or betrayed Russia.

In the past year, Japan has offered Russia a plan for economic cooperation of eight items: urban development, energy, medicine and so on. Officials and businessmen have signed various agreements. The parties decided to postpone the historical and legal aspects of territorial problems and to go the way of strengthening trust through joint economic activities on the Islands.

“Russia and China began to discuss the demarcation of borders only after bilateral relations have been major changes. The territorial problem with Japan can only be decided by President Putin. However, first you need to prepare a friendly environment. It is not necessary to hope that all will be solved soon”, — said the expert Fyodor Lukyanov.

Even if you close your eyes on the territorial issue, the cooperation with Russia in the field of economy and security interests of Japan, given the unstable situation in northeast Asia: the nuclear issue of the DPRK and so on. Despite this, it is inconceivable that Japan, like China, refused to direct criticism of the annexation of Crimea.

Japan step by step increasing the cooperation and relations between the heads of countries considering the development of territorial negotiations, but does not prevaricate about some political moves of Russia. It remains only one way: try to create a friendly environment by the method of carrot and stick.