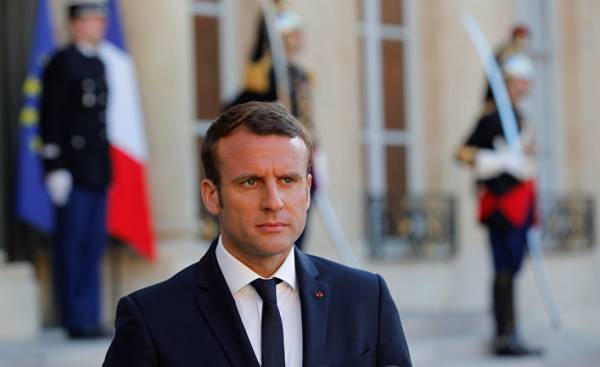 The victory of Emmanuel Macron to the presidential elections in France caused a wave of relief and euphoria in Europe. But now came the turn to a reality check, because we don’t know yet exactly how the new President intends to restore the French economy. The unemployment rate in the country hovers around 10%, and output of industrial sector is still 12% below the level achieved before the global financial crisis of 2008.

Macron suggests that he does not want to raise the retirement age, increase the 35-hour working week or to simplify for businesses the process of dismissal of employees. At the same time, he wants the Northern Eurozone countries have sent their money in southern States that will protect the financial and economic markets in France in the region.

This is, generally speaking, a portrait of a program that allowed Him to win the election. However, it reflects all the most important thing. What else he may have in mind when calls for the establishment of the post of Minister of Finance of the Eurozone that is able to store collectively guaranteed debt and collect its own taxes? That why he calls for a unified system of Bank Deposit insurance in the Eurozone and the system of unemployment insurance? The motive underlying these ideas, too obvious: support the domestic economy at the expense of others.

In addition, the Makron supported the proposal on the establishment of the Parliament in the Eurozone, declaring thereby creating a two-tier Europe. In fact, it’s just a recipe for a split of the European Union.

The transformation of the Eurozone into a “transfer” Union with its own Parliament will only deepen the rift between the Eurozone countries and Northern and Eastern EU countries (Denmark, Sweden, Poland, Czech Republic, Croatia, Hungary, Romania and Bulgaria). Most of these countries will not enter into it, so they will be cut off from Europe forever. As poignantly observed, the pole Donald Tusk, President of the European Council, in 1989 we already had a two-tier Europe, we should not wish for her return.

The German government will not easily help Macron to split the EU into two parts, even if he wants it. The German Constitution confers an inalienable right of the Bundestag to control the country’s budget. Even if all the members of the Bundestag agrees to transfer part of the budgetary sovereignty to the European level institutions, such a decision can still be made only on the official referendum.

The powerful German constitutional court already made it clear that programs of financial assistance to Eurozone countries and other such actions are the limit of the possible in the frames of the basic law. A German court gave European the question of the programme “outright monetary transactions”, European Central Bank, but he can’t do this in the matter of budgetary sovereignty, because the text of the Constitution is unambiguous, and the court is not empowered to interpret the Constitution of Germany.

Despite all this, it is important that the process of European integration was moving forward. More needs to be done to improve border traffic in the EU, and to strengthen partnerships in the security sphere. Moreover, Europe must learn the lessons of the wars of the XX century and to opt out of national armies. Only then the European Union for peace will become a reality and not an empty phrase used in the policy.

In the postwar period, European heads of state have developed a draft of the Treaty establishing the Western European defense community. However, this proposal was rejected in 1954 because of the veto of the French National Assembly adopted against the advice of Charles de Gaulle, the legendary President of the postwar era. Later against a single European army was made by the UK.

However, the UK will no longer be part of the EU (at least in the foreseeable future), and France, and a young, vibrant new President. It’s time for a new attempt. German people can probably be persuaded to agree to such a form of integration on the same referendum, which in any case have to carry out for the approval of the budget plan Makron. The same can be said about the peoples of Eastern Europe.

Through a desire for genuine political integration based on a unified army and partnership in the sphere of security within the entire EU, the Makron could guarantee itself a place in history. But to achieve this goal he will have to move away from the categorical refusal of his predecessors from the political Union. He will also recognize the pattern of German anxieties: creating a fiscal Union now, Europe will miss the chance to create a political Union in the future.

Unification of the armed forces of Europe under the joint command is the only way forward. The creation of a fiscal Union without a political Union forever block the way to European unification and set European Nations against each other even more than already did the single currency. Anyone who wants to create a Union for peace, cannot allow this outcome, and especially to facilitate it.