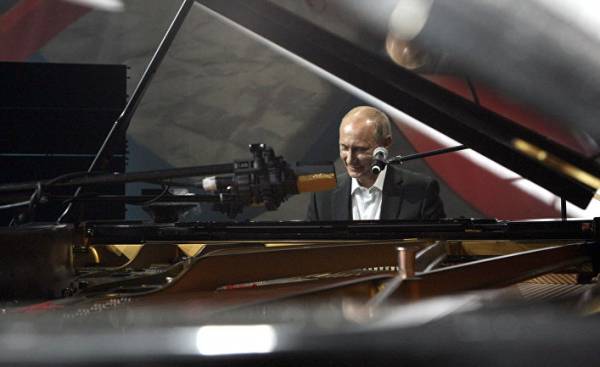 Waiting XI Jinping in Beijing, the Russian President took two pieces of music for 50 years. Some of the heads of States and governments, labored in the field of music, could be Putin a good company.

Putin played the piano. Waiting for the start of the reception of Chinese President XI Jinping during a forum of international cooperation “one belt, One road” at some point, the Russian President stood up, walked to standing in the hall the piano and sang two Russian songs of the 50’s — “Evening song” by Vasily Solovyov-Sedoy “Moscow Windows” Tikhon Khrennikov. One tune dedicated to St. Petersburg and one in Moscow, to maintain a kind of parity. This video instantly scattered all over the Internet, was distributed by a governmental Agency Sputnik, the main tool of the Kremlin propaganda; it looked as if the Agency in advance, invited the operator to captured this memorable moment in eternity.

Putin has appeared before public in an image of a rider with a naked torso, the pilot of the hang glider in the flock of migratory birds, swimmer, diver, professional unarmed combat: the Russian President has managed to demonstrate all facets of his versatile nature, even if it was not his first public performance at the piano. In 2010, the charity event where the Apple was nowhere to fall because of the huge number of celebrities, Putin has played the American song 40 years of Blueberry Hill, recorded, among others, Fats Domino and Louis Armstrong. At that time he first performed it on the piano and then sang.

Another performance took place in 2011 in the theater. And in 2014 he again played the “Evening song”, this time in the MIFI. In fact, at every speech we see that he is not very skilled pianist, if we leave out the fact that in Beijing the tool was openly upset. However, when playing he uses all the fingers of the right hand and sometimes even playing left, and it says that he took a certain number of lessons. Perhaps, in childhood, judging by his repertoire.

In short, if you believe some accounts, Putin has not reached the heights of his friend Silvio Berlusconi (Silvio Berlusconi). That Berlusconi played the piano during the cruises with Paolo Villaggio (Paolo Villaggio) and Fabrizio De andré (Fabrizio De Andrè), has become a historical anecdote, and Paolo Villaggio even admitted that he invented it, but apart from photos, which depicted the pianistic talents of our Cavalier, and there are numerous stories about it. Once, during a reception he and Eugenio Scalfari (Eugenio Scalfari) allegedly staged a piano duel. Another time he allegedly was accompanied by Andrea Bocelli (Andrea Bocelli). In the global network, however, it is impossible to find neither video nor audio recordings of Berlusconi pianist.

An excellent pianist, evidenced by the easy to find in the Internet is Condoleezza rice (Condoleeza Rice): in one video you can see how it performs before Queen Elizabeth. Play she learned from her mother, who was a musician and loved music so much that he named his daughter the musical term “Con dolcezza” (gently, nicely), which does not correctly recorded in the passport office.

There is a documentary about the musical talents of Edward Heath (Edward Heath), the Prime Minister of great Britain from 1970 to 1974 and leader of the conservative party to Margaret Thatcher. Being the son of a carpenter, he was able to go to Cambridge with a scholarship as an organist, he also was a pianist and conductor in the orchestra. In Downing street, he decided to install the piano, played the Church organ, conducted by different famous orchestras and even recorded a few records.

The list of politicians-pianists, of course, there is the Ignacy Paderewski (Ignacy Paderewski), the great pianist and composer, who in 1919 became involved in the question of the independence of Poland Prime Minister and Minister of foreign Affairs.

We, of course, no documentary evidence of the musical talents of German Chancellor Bismarck and Queen Victoria, however, preserved evidence of music-making at least two U.S. presidents — Harry Truman and Richard Nixon, while the latter performs works of his own composition. Nixon also played the violin and the accordion, but it has kept only a few photos.

But there are videos, which show valéry Giscard d’estaing with the accordion. The same Margaret Thatcher played the piano, but there are just a few pictures of the Prime Minister in front of the instrument. Say Emmanuel macron (Emmanuel Macron) also studied the piano, leaving, however, while the network no traces.

It remains a mystery talent of Franklin Delano Roosevelt-organist: on this account there are only a couple of testimonies. Musical talents were, however, many famous inhabitants of the White house. Of the more recent former presidents, his love for the saxophone famous bill Clinton.

First playing music of the presidents was Thomas Jefferson, third US President: he played the violin, the cello and the harpsichord, but also composed music. John Quincy Adams played the flute, and the famous virtuoso king of Prussia Frederick II. John Tyler, Abraham Lincoln, and Woodrow Wilson was a violin. Chester Arthur played the typical cowboy instrument — banjo. Ronald Reagan, and before him John Calvin Coolidge owned a very basic musical instrument of the cowboys as harmonica. The most versatile in terms of music was Warren Harding, who served as President from 1921 to 1923 he created the musical group and claimed that he owns all the tools “except trombone and cornet in e-flat”.

In Italy there is a famous keyboardist — head of Lombardy and former interior Minister Roberto Maroni (Roberto Maroni); it is also the band leader. The founding fathers of the Republic, Giuseppe Mazzini and Giuseppe Garibaldi was known for his ability to play the guitar, of the more modern guitarists can be called Bettino Craxi (Bettino Craxi) and Umberto Bossi (Umberto Bossi). Mazzini did even a few musical-ethnographic transcriptions, and Bossi in his youth, he played in a rock band.

Tony Blair (Tony Blair) also says that in his youth he was a guitarist in the group, but in the film Boris Johnson (Boris Johnson) that he doesn’t even know how to hold a guitar in his hands.

The accordion is fluent Belarusian President Alexander Lukashenko, he even demonstrated this skill during his election campaign. The dictator of Uganda IDI Amin Dada was the accordion. Hugo Chavez played in the Venezuelan folk guitar — Cuatro. The President of Bolivia, Evo Morales was a trumpeter in the band, and this experience, apart from playing football, earned him a place responsible for cultural Affairs in the Union “cocaleros”, where he began his career in politics.

A passionate violinist was Benito Mussolini, in his youth he played in the tavern of his father. Recently, two of the musicologist has discovered that one of the violins Mussolini formerly belonged to Vivaldi. Curiously, the violin and studied in his youth two selfless defender of constitutional rights Pannella Marco (Marco Pannella) and Alfredo Biondi (Alfredo Biondi). In the past music for instruments of his time, wrote kings, from Henry VIII to Louis XIII. Queen Margaret was a great lover of the mandolin in her honor in the late nineteenth century opened up many schools that taught to play this instrument, often immigrants from Italy. Including here and spread the myth that Italians love spaghetti and playing the mandolin.