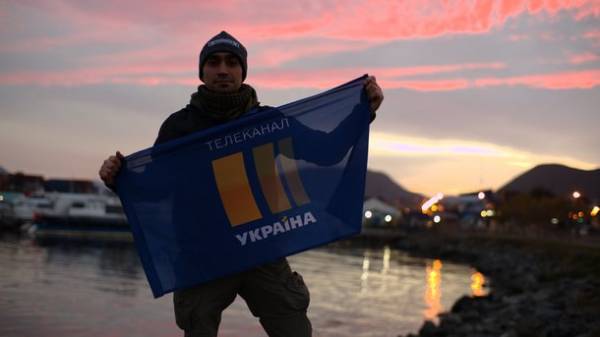 A week ago the film crew of the TV channel “Ukraine” went with the expedition of scientists to the South pole. The Ukrainian Antarctic station “Akademik Vernadsky” scientists go in the 22 th time, however, journalists will accompany them for the first time.

This year the expedition went 12 scientists – they will stay at the station for a little over a year. Accompanying journalist Alexander Makhov and the cameraman Ruslan Kuzikov will monitor the operation of the station for three weeks.

“Video Antarctica a lot, but in most cases it’s some kind of shooting or from the personal archive of the polar explorers themselves, or some scientific films about Antarctica at all. We want to pay more attention to our Ukrainian polar explorers, what conditions they work, what they do,” says journalist Alexander Makhov.

In the composition of the expedition – scientists, electricians, dyselxic, system administrator, doctor and even a chef. All of them have passed a serious selection, medical and psychological testing and mandatory practical training.

“The selection is done for health reasons – in many respects: to avoid chronic illnesses and people were in good physical shape,” said Alexander, a doctor of the 22nd Antarctic expedition.

In ordinary life he is a pediatric surgeon, the station will be responsible for monitoring the health of the members of the expedition to explore the adaptive mechanisms of the organism to climatic and social conditions.

Ushuaia is the southernmost city on the planet, the main gateway to Antarctica. South – pole only. On the one hand the city is surrounded by mountains, with another – a way out through the Bay into the ocean.

In Ushuaia the team “Today” traveled with the explorers for two days. Change of planes, time zones, continents, and even seasons, because in Argentina it’s the middle of autumn – the way was strange and difficult.

In Ushuaia there is no real live penguins, but the gift is darkness. The city survives by tourists – there are hundreds of hotels and hostels of different classes. Tickets from Ushuaia to Antarctica are worth 7 thousand dollars. However, the season lasts only from November to March. Now the hotels are empty, and the ships out in the ocean because of the abundance of ice.

It is a zone of free trade, and the prices here, according to Argentine standards, quite nice. In addition to a gift penguins here sell local liquors and liqueurs, jam of rose petals, strawberries, pears and apples, homemade chocolate.

A separate item for gastronomy tourist – seafood. Often visitors choose huge crabs cooked on an open fire with spices. Usual servings here – $ 20 (560 UAH) as much as anything there are octopuses, crabs and mussels.

The ship with the expedition on Board and the crew had to go the 4th of April. However, the weather forecasts were disappointing – storm, and in the most dangerous area on the way to the Drake passage. In the open sea, the team took only 5-th.

“This is a very good ship. I have had it to go. Moreover, the captain tries to get around the ice. If anything, he’s easily overcome, here reinforced bow section”, – told our journalists Igor Moroz, chief engineer of the 22nd Ukrainian scientific expedition.

Ahead of the Ukrainian polar explorers – a thousand miles by ship, which is about three days without any connection. In Argentina, the crew will be back in two weeks – then they will tell and show you how to live today in Antarctica.