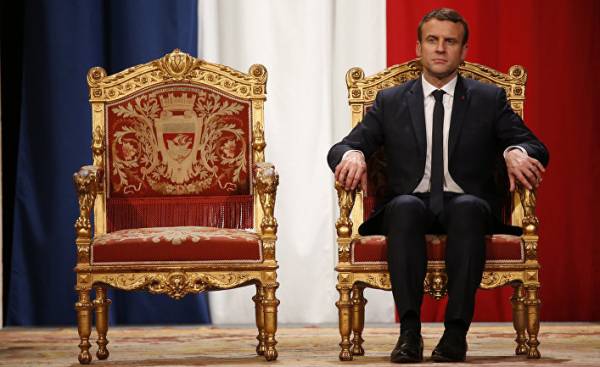 LONDON — a Convincing victory of Emmanuel Macron over marine Le Pen in the second round of the presidential election in France was a major success for the liberal Europe. But it was a victory in the battle, not the war. The idea that every third French citizen is able to vote for the national front, Le Pen, was unthinkable just a few years ago.

Commentators have secured the wave of demagogic politics that swept Europe (and a significant portion of the rest of the world), the label of “populism”. But apart from flashy style common to all populists that these movements have in common? Spanish party “Podemos” and the Greek “SYRIZA” are on the left flank. The French national front, the Dutch freedom Party and the German “Alternative for Germany” (AfD) on the right. Beppe Grillo, leader of the Italian “five star Movement”, said that his movement is neither left nor right.

However, they all sound a common theme: economic nationalism, social protection, anti-European mood, antiglobalization, hostility not just to the political establishment but also politics in General.

In order to understand what it might mean for the evolution of European politics, should turn to the history of fascism. Benito Mussolini, founder of Italian fascism in 1919, began as a socialist-revolutionary. And in Germany, as we remember, the word “Nazi” was a shortened version of the name “National socialist German workers ‘party”.

Initially, fascism was nationalist, anti-capitalist movement. He later narrowed the line of attack to liberal capitalism in the first place, “international Finance”. And soon slid into anti-Semitism. German social Democrat August Bebel called it “the socialism of fools.” European fascism collapsed after the defeat of Germany in 1945, but its less aggressive forms survived in other countries, for example, in Argentina, with its Peronism.

Judging by the social base of interwar fascism, it is reasonable to see it as a right-wing party. At that time the working class was solidly supported left-wing parties. For fascism was only one political space — the petty bourgeoisie: shopkeepers, small businessmen, civil servants of low rank.

Today, however, the social base for left politics has evaporated. The classical working class has disappeared: the social democratic party and the trade unions have become their own shadow. This means that leftist populists will inevitably have to compete with extreme right-wing for supporting the same groups of the population in the interwar period turned to fascism: young unemployed men, “little people” who feel threatened by the “oligarchy” of bankers, global supply chains, the corrupt politicians, the distant bureaucrats of the European Union and all the “fat cats” of any sort. The aim of modern populists, and of all political stripes have increasingly become not only potential supporters, but also the same enemies.

How big is the space for further growth of populism, and what kind of socialist or fascist — will be able to attract the available votes?

On the first question the General answer gave former US President bill Clinton during the 1992 campaign: “it’s the economy, stupid”. Among the major economic centers of the world the EU is the slowest recovery after the 2008 crisis. In France the unemployment rate is 10%. Youth unemployment reaches there in about 24%, in Italy 34%. This creates fertile ground for recruitment by extremists of both the left and the right.

Rules cannot be called uncompromising budget hawk, but he wants to reduce the budget deficit of France from 3.4% to 3% of GDP, in line with the ceiling set by the stability Pact and growth of the EU. In the queue for the reduction were 120 thousand jobs in the public sector. However, he wants to simultaneously push the growth of the economy with a stimulus package worth 50 billion euros ($55 billion) to expand social security.

For success in finding the quadrature of the circle, the Makron need economic growth, and to achieve it, he hopes to reform on the side of the market supply. Macron plans to reduce profit tax from 33% to 25% and eliminating a financial investment from property taxation. An outspoken critic of protectionism, he will advocate for a Comprehensive economic agreement the EU and Canada (CETA) and the Transatlantic trade and investment partnership with the United States. His support of the law El Hamri, to simplify the procedure of dismissal of workers, and opposition to the 35-hour working week, to indicate the intention to increase the flexibility of the French labour market.

Despite talk of a “green economy” and calls for pan-European investment programme, the agenda of the Macron is generally neo-liberal. In fact, he hopes that his program, if implemented at EU level, will allow to raise not only the French economy, but also the “European boat”.

In fact, such reforms are more likely to sink all these boats, giving the populists the chance. And then what the variation of populism will be able to take advantage of this chance?

The idea of populism became the center of attention of economist Dani Rodrik. He argues that democracy, national sovereignty and global economic integration are mutually incompatible. At least one of these elements must be sacrificed. And since many voters in Europe and the United States feel that you have suffered because of globalization, populist parties, aggressive putting the nation above all else, there is the advantage over rivals.

From this point of view, the macron was the perfect candidate who could lose to Le Pen. He is the epitome of the globalist elite. He seems too soft on immigration. And if we assume that his new political party will be able to get a parliamentary majority in the National Assembly elections in June, his government will need support from the traditional parties. Over the next five years, figures from the establishment may well become synonymous with the disastrous policy, becoming a perfect target for Le Pen and the front National in the presidential election of 2022.

Yes, of course, in France and support leftist programs. About 20% of the electorate voted for ultraleft populist Jean-Luc Mélenchon in the first round of the presidential election. And before the second round of one of the most striking hestego “Twitter” sounded like #NiPatronNiPatrie (“neither the boss nor the homeland”), demonstrating the dissatisfaction of many voters with the need to choose between neo-liberalism and nationalism. The problem left is now to focus on the really problematic aspects of global economic integration (financialization, the priority of capital over labor, creditors over the debtor, the boss over the worker), not while slipping in a reactionary policy.