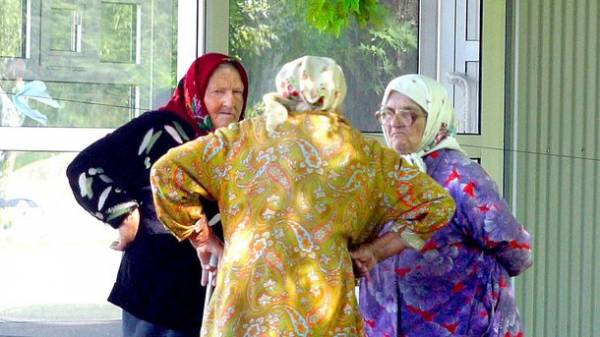 Pension reform, presented recently by the Cabinet, will bring the Ukrainians not only “price” but bitter “pill” in the form of increased minimum length of service entitling to a pension, and the abolition of pensions for years of service. “Today” figured out who will benefit from innovation and what they think about the retirees themselves. We will remind, according to Prime Minister Vladimir Groisman, as a result, the reform of the payments will grow from 11.9 million pensioners (12 million), while 5.6 million people will add almost 1000 UAH.

MODERNIZATION OF PENSIONS. This is the most important decision for retirees. In the end, many hope that their pensions will increase. The meaning of modernity in the fact that in the calculation of pensions awarded before 2008, used average salaries 1197 UAH, and from 1 October 2017 will apply a three times greater — 3764 UAH, since earnings in 8 years has grown a lot, and no pension. “I have a pension of nearly RS 3500, get it since 2006, working experience of over 50 years, so we expect a substantial boost. According to my calculations comes out to about 1000 UAH”, — says associate Professor of NTUU KPI Vassili Legkov. But those who have a minimum pension can receive a bonus only when a very large seniority of 40 years or more. According to pension expert Vitaliy Melnychuk, many pensioners now pay extra to a minimum at the expense of the state. “Let’s say a person with the experience of 30 years and a small salary estimated pension of 800 UAH. But he still gets minpensiyu 1312 UAH. After recounting his pension will increase, relatively speaking, 300 UAH to 1100 UAH. But he, as before, will get the same 1312 UAH, just the state will pay less, and Pensfond will pay more. So really from modernizing benefit those who have pensions from 1500 UAH and above,” explained Melnychuk.

The social standards. The Cabinet promises from 1 October to cancel the underpayment of 15% of their pensions to working pensioners, introduced in 2014. “In fact, is the equivalent of the tax on the income of workers, but there is a difference with insurance premiums which are paid to pension, all taxes have already been taken earlier, so the state collects employee retirement twice. The abolition is welcome, and 2 months ahead of schedule increasing minpensii from 1312 to 1373 UAH”, — says economist Alexander Okhrimenko.

CANCELLATION OF BENEFITS. In a less advantageous position were the beneficiaries of pre-retirement age, eligible for early retirement on superannuation. The largest category among them teachers and doctors that may retire before reaching 60 years of the required experience in the specialty (now 26.5 years). From 1 January 2018 them to want to deny this possibility. So the 54-year-old nurse Ludmila Dymsha told us that collects documents for preferential pension, until it was canceled: “I do Not see sense 6 more years to work, anyway a pension will be slightly more. It is not enough for life, but the work, though not by profession, I find (to work as a physician or a teacher so retired law prohibits, otherwise will deprive of pension. — Ed.)”. But 50-the summer teacher of physics of one of Kiev schools Lyudmila Petrov retirement on superannuation was not going, although she has the experience of 29 years. “It’s no secret that because of the low salaries many teachers moonlighting as private lessons. And the main clientele — the students of the school. If I leave, will lose the extra income,” said us Petrov.

THE PURCHASE EXPERIENCE. The Cabinet wants to increase from 15 to 25 years the minimum length of service entitling to a pension, but allow you to buy from 1 month to 5 years of experience for those who don’t have to pay in Pensfond for 704 UAH per month. “This is the way for me. If adopted such a rule, will begin to save money for a fee, says Builder Nicholas. — I since the late 1990s, working in the shadows, doing the repairs, so even the minimum pension I do not “Shine”. Be issued officially do not want, as I’ll make much less than now.”

“Buy” experience: you can, but not enough

According to Melnichuk, the idea of “buying” time for the contributions Pensfond — logical. “The basis for the calculation of strajitza is a single sotsvznosa. No matter how a man of his paid — monthly or lump — says Melnychuk. I can afford to “buy” a 15, 20 or 25 years of service to monpansie will be unfair to those who worked all her life, so the proposal of the Cabinet optimally. The IMF insisted only on two years, but negotiations continue.”

And expert increpare Marianna Onufryk believes that 15 years of service giving entitlement to pension, is not enough: “Raising standards detensive market. Retired people live on average 18 years, so those who have no ability to pay for ERUs 2-3 years experience can earn”.