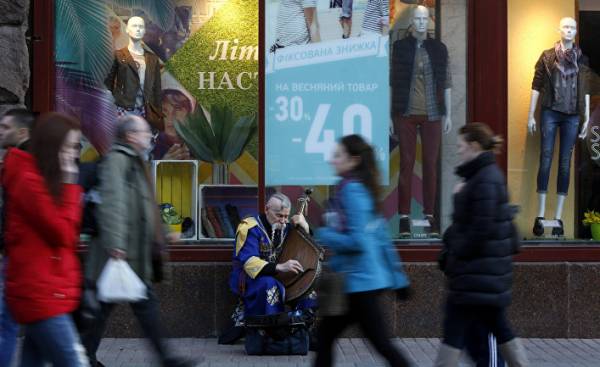 After the Kremlin refused from the fictions of the Slavic brotherhood and invaded its neighbours, it is not surprising that the first place in the list belongs to Russia. The following is usually corruption. While the Russia — enemy at the gates, the corruption is the main internal enemy of the country. The list also includes an eclectic collection of enemies less from destructive bureaucracy of emigration and low birth rate to bad roads, cronyism, and international indifference.

However, one ubiquitous and insidious enemy is still not disclosed. We are talking about the negative, enveloping the perception of Ukrainians of their country. Most foreigners living in Ukraine, familiar pattern: endless conversations with Ukrainian friends and colleagues, examining the manifestations of optimism as the charming but childish flaw. Always expect the worst, to find the thorns on each rose, only to see a fly — it’s very exhausting.

A vivid example — the Ukrainian Saga with visa-free travel to the EU. At first, the concept of a visa-free regime was subjected to public ridicule, which lasted at each stage of the process. Everything from television analysts to talkers from the eatery — was sure that any effort is useless. Ukrainians themselves cheat. They do not need anyone.

When Ukraine finally got to step away from the prospect of visa-free travel, the lyrics have changed but the tune remains the same. The same crowd now says that visa-free regime was not worth all this effort. So many documents! No guarantees! They are literally impossible to please.

Almost any positive change in Ukraine is passed through the cynicism and negativity. The public procurement system ProZorro received international awards, has saved millions of dollars were borrowed by other countries. ProZorro commendable, as an example the Ukrainian superiority and innovation. But many people are more likely to have heard about ProZorro due to the different conspiracy theories, calling system another scheme for someone’s personal gain.

Recent the Eurovision song contest in Ukraine — is another success story, unable to break through the proverbial negative perception of the majority of Ukrainian citizens. The event is truly a triumph in almost every way: the European guests were impressed with the beauty of Kiev, the hospitality of the hosts and the professionalism of the show. The successful holding of the contest challenged the negative stereotypes by positioning Ukraine as a truly European nation. However, in the vast Ukrainian information space this positive message was barely noticeable. Instead, attention is focused on alleged corruption, temporary complications in everyday life and the emergence of half-naked Prancer on the stage during the final of the competition. Lost another opportunity to convince the Ukrainians a sense of pride for their country.

This universal film is actually not devoid of grounds. In many respects this is a logical defense mechanism, based on bitter lessons of history. Since 1991, the Ukrainian experience of self-government was deeply disappointing. Owning a serious material base, the country is gradually slid to the bottom of the post on the background of the institutional corruption of biblical proportions and regular economic failures, have enriched a tiny minority and leave the majority of Ukrainians in poverty.

Pre-independence history of the country was even more devastating. Occupied and divided for hundreds of years, Ukraine was at the center of the totalitarian Apocalypse in the first half of the twentieth century, suffering more than any other nation at the hands of Hitler and Stalin. In the period between 1917 and 1953 were killed from ten to twenty millions of Ukrainians, but these staggering crimes for the most part, remain unknown outside the country. This historical trauma could be enough to persuade the Ukrainians to negative thinking. Combined with the legendary fatalism of the Slav tales this more than explains the strong negative connotations in modern Ukraine.

However, it is important to recognize that this negativity serves as a self-fulfilling prophecy. The constant downplaying of the chances of Ukraine slows down the process palamidessi transformations. Reformers are much more difficult to maintain the necessary momentum to overcome decades of inertia. Negativity strengthens the position of those who advocate inaction and submissiveness in the face of inevitable. It is also a bad signal for international investors. I met with numerous delegations of potential investors. They are confused by the somber tone with which they are faced during their visits to Ukraine. And, despite the fact that some members of the government and the business community presented them with a balanced overview of positive developments and challenges, many painted a picture of relentless pessimism. As expected, this approach does not inspire confidence to investors.

The media also play in all of this role. Good stories on Ukrainian television are less common than smiles in the Soviet photo album. Instead, viewers are fed a daily diet of poverty, injustice and poverty. Ukraine is depicted in the evening news on virtually every TV channel, — a dark and unattractive place. Western reporters visiting Ukraine and based in Moscow, also help to maintain the tone very negative and gloomy lighting of Ukraine in the international media.

How you can break this vicious circle? Unlike their other enemies, Ukraine does not need to direct the war against negativity. Rose-colored glasses hardly useful in the current situation, and an honest assessment of the shortcomings of the country need to achieve the changes envisaged in the Maidan. However, is long overdue a more witty approach to the Affairs of the country.

Ukraine, of course, imperfect. She survived one of the most turbulent histories in the world and stuck in a relationship with probably the worst roommate on the planet. Corruption is endemic. The people are poor. But there is also a place for the miracle of hope, when activists created a vibrant and thriving civil society. This is the region where the flame of liberty has experienced one of the darkest chapters of humanity, where the traditions of hospitality and inclusiveness challenge to centuries of political violence and abuse. Ignoring the problems of Ukraine would be stupid and counterproductive, but to ignore the merits and achievements of the country are also unforgivable. Ukrainians have much more reason for national pride than they think and they can understand that this pride in itself may be the first step to success.