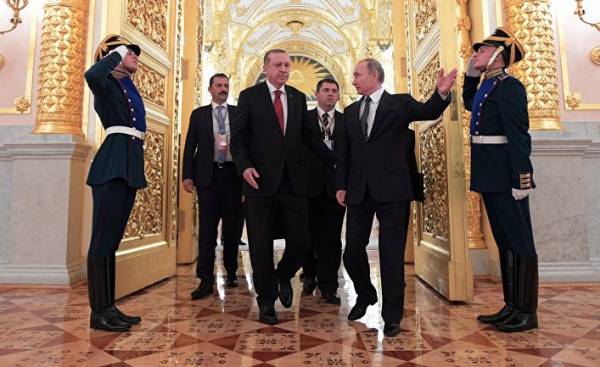 Currently Russia and Turkey are two influential powers in the Caucasus, the middle East and the Black sea basin. Geopolitically, countries compete on many strategic issues, but, nevertheless, areas of cooperation among countries are expanding. At the end of the cold war, countries have developed several joint projects in many areas. On the other hand, national and foreign policy of the countries are radically different because of the natural geopolitical interests and problems, inherited from the times of the cold war.

Turkey is Russia’s key importance in terms of energy exports. Russia is Turkey’s largest export market. Since the beginning of 2000-ies in Turkish-Russian relations has been a major speaker. Countries mutually cooperate in the field of Commerce, tourism and energy. On the other hand, the existing conflict of interests in the middle East, the Black sea region and southern Caucasus, as well as the leading role of Turkey in NATO are a weak point in Turkish-Russian relations. We can observe in the development of the situation in Syria and Ukraine.

Turkey and Russia cemented a serious cooperation in the field of Commerce, tourism and energy. Trade between the countries increases every year. Turkey receives a large income from Russian tourism. Turkey buys a significant amount of natural gas and oil in Russia. This is a major source of income for Russia. In addition, Russia supports the plans of Turkey for the construction of the first nuclear power plant. Countries cooperate in the gas pipeline project Turkstream. In recent years the number of Turkish-Russian marriages has increased dramatically. Turkish soap operas bring together a record number of Russian viewers and contribute thus to the positive image of Turkey.

The head of Turkey visited a few days ago Russia with official visit. He met with Vladimir Putin in Sochi. The Sochi meeting was a continuation in the normalization of Turkish-Russian relations, which began June 27, 2016. The Russian media covered this meeting under the slogan “a Return to cooperation.” President Erdogan described the current situation as a “strategic partnership”.

Problems in the field of tourism, agriculture, textiles, atomic energy and project Turkstream was resolved during the dialogue, Erdogan-Putin. Unable to overcome the decision of questions connected with the export of Turkish tomatoes and visa restrictions. The talks in Sochi has launched a new phase of negotiations in Astana. The fact that Turkey and Russia will sit at the same negotiating table to find a solution to resolve the Syrian crisis, important from the point of view of demonstrating the potential of cooperation that exists between the two countries.

The meeting of Erdogan and Putin in Sochi has opened a new page in relations between the two countries. At the end of the summit the heads of state positively assessed the results of the meeting. Thus, we can conclude that Turkish-Russian relations have moved from the process of normalization for cooperation. Of course, it was very hard to reach that level. Had to go through difficult periods and trials. As we have said, there is disagreement in political terms, and conflicts of interests in many areas.

However, for Turkey and for Russia will be beneficial to invest in those areas where there is a common potential and to take responsibility for the existing differences. In the early 2000s, they managed to separate the issues of mutually beneficial cooperation of friction in their bilateral relationship. Therefore, between the countries there has been significant progress on many issues. If Turkey and Russia will manage to resolve the Syrian issue, it will be a new era in relations between countries. Support of these two States can lead to hope for the solution of many problems in the region.

In Syria, Turkey and Russia are dealing with different players. If they manage to create an effective diplomatic mechanism, it can lead to positive results in seemingly very deplorable situation. Close relations of Russia with the DS, PAC, the Syrian cell of the terrorist organization PKK represent in the near future the biggest risk in terms of Turkish-Russian relations. On the one hand, Russia is trying to maintain Turkey’s good relations, and with another – works the same with the PKK in the West of the Euphrates and wants to protect the Afrin. This behavior is incompatible with the establishment of good relations with Turkey. Russia should put an end to future relations between the two countries has improved.