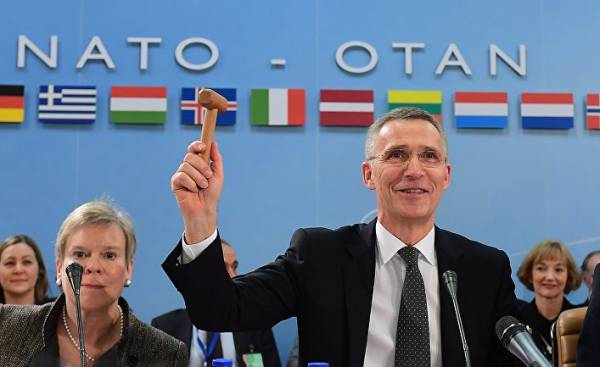 Jens Stoltenberg (Jens Stoltenberg) does not like surprises. He prefers to be prepared for questions. He has a ready answer to nearly any possible question. In the morning at Downing street after a meeting with the Prime Minister and Theresa may (Theresa May) is still working as always. To send more troops to Afghanistan? “We consider this appeal and in the coming weeks will decide the number of our troops”.

UK determines the size of their defense spending? “The UK is exemplary when it comes to defense spending and the distribution of obligations”. But for a moment Jens Stoltenberg lost. “Do you have a cigarette?” — I asked him. No, it does not. The Secretary-General of the strongest military Alliance in the world smokes.

A warm spring evening in Berlin. The head of NATO just gave another interview at the hotel Adlon. Now he would walk through the Zoological garden. He wore a dark jeans and sneakers for running — as well as bodyguards who are quietly approaching, if their mentee is suitable to bum a cigarette. Although the identity Stoltenberg is often used as a foe, he may — with the exception of his homeland of Norway — incognito to run in the Park in Europe.

He is enjoying a few spare minutes, talking about Norwegian literature, talking about the TV show “Occupied”, a film that tells the occupation of Norway and the Prime Minister Jasper Berg (Jesper Berg), the prototype of which in some degree was exactly Stoltenberg. This character he is, rather, not like. He seems to be too passive and naive.

It will soon be three years since Stoltenberg takes up post of General Secretary of NATO. At this time, he oversaw the decisions to build weapons, led a careful dialogue with the Russians and tried to hold back the Turks. For this position Stoltenberg last but not least have to thank Angela Merkel. She appreciated the dry pragmatism of the Norwegian Prime Minister. She found in him an ally, when, for example, has mooted the idea to require the achievement of concrete results in assisting developing countries.

Stoltenberg can and must now show their pragmatism in its entirety. As Secretary General he is the servant of 28, and with the adoption in the near future of Montenegro in NATO, and 29 owners. Any wrong word could lead to trouble with one of the bosses. So he carefully weighs his words and so willing to repeat them if they are already checked. 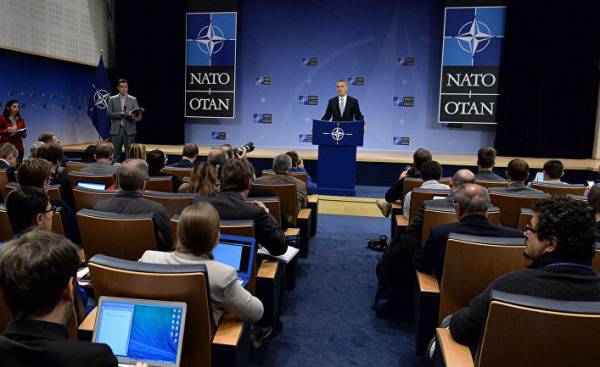 © flickr.com, NATOГенеральный NATO Secretary Jens Stoltenberg during a speech in the headquarters of NATO in Brussels

“We live in a time with unprecedented challenges both from the East and from the South” — his phrase. At Stoltenberg’s a custom to wave both hands to the left with the word “East” and right at the word “South”. The Brussels journalists seems fun to predict the rhythm of the strokes of the hands Stoltenberg.

The first meeting of the NATO trump is different from the others: no lengthy speeches

Thursday next week takes Stoltenberg in Brussels to their bosses, the leaders of all States-members of NATO. Will open a new memorial NATO, which put a piece of the Berlin wall and the fragment of the building of the world trade center in memory of the victims of September 11, followed by a joint dinner. In the end it all depends on one thing: does more trump that NATO is obsolete? And understood the US President, what is the Alliance?

NATO Secretary General needs to get along with everyone, but one it needs to please. Consequently, the meeting should not be called a summit, is focused on trump. No need to test his patience for long speeches. It is not clear whether there is a written closing statement. In the headquarters of NATO would like to have some kind of rows, strengthening the “transatlantic Alliance”. At least in case if trump will write again on Twitter.

In April, Stoltenberg was in the White house for a meeting on may 25. The first time he met the man who in the election campaign vilified the 68-year-old Alliance as obsolete. “It did not have to go back to the things he said during the election campaign, says Stoltenberg, is because in all the conversations with me, he unequivocally expressed support for the Alliance.” As Vice-President Mike Pence (Mike Pence), the Minister of foreign Affairs Rex Tillerson (Rex Tillerson), the Minister of defence James Mattis (James Mattis) and the national security Advisor Herbert McMaster (H. R. McMaster).

This one sentence Stoltenberg was supposed to hear from trump

The Stoltenberg has reason to list these people. People like Mattis and McMaster explain to Trump such things as the duty to render assistance article 15 the North Atlantic Treaty. Things, as he says, which until recently was not supposed to be interested in him as a building contractor.

These are the people “who stand between us and the abyss”, as formulated by the American writer James Kirchik (James Kirchik). Sometimes such people are looking for outside help. It seems useful to trump heard some things from Angela Merkel or just from Jens Stoltenberg. Stoltenberg has won approval in the capitals for his contact with trump. It is good to the Americans, the government respectfully listens to him.

Trump praised the meeting with Stoltenberg as a “productive conversation” about what else can be undertaken by NATO in the fight against terrorism. He was “a long time” complained on the inaction of the Alliance. But now it’s in the past. He added: “I said that the Alliance is outdated. It is no longer obsolete”. Here’s a proposal that Stoltenberg had to transfer from Washington.

Past that he ought to be ashamed of? It doesn’t have it

Among other things, it sought the withdrawal of Norway from NATO. In 1985, when Stoltenberg was about 20 years old, he became the Chairman. Says Stoltenberg, his “old friend” of those times is Sigmar Gabriel (Sigmar Gabriel), who as foreign Minister is now tormented by his arguments about the unreliability of the tasks for the States-members of NATO to spend 2% economic strength on defense.

Stoltenberg says that he has no past that he could be ashamed as Secretary-General of NATO. He was hostile against NATO’s policy of the Norwegian organization Juso. “It is unlikely that you will find in Norway, and anyone else who so strongly fought for NATO membership, as I am,” he cheerfully proclaimed.

And Vice versa? Should not have been in this position it sometimes to shake things up a Norwegian politician? The man who as Prime Minister made an impression on their country and the world the right words after the attack on a summer camp organization Juso on utøya. “Today in the evening and night we will take care of each other, to comfort each other, talk to each other, to stick together. Tomorrow we will show the world that the Norwegian democracy grows stronger when it is required,” he said.

Diplomatic skills will need Stoltenberg in relations with Turkey

“I approach these values from the other side. I speak for NATO because I believe that NATO is the best guarantor of freedom, an open society and democracy.” In September, the foreign Minister was in Ankara. He visited the Parliament and visited the Wake of the recent coup, and then on a press-conferences has assured: “Turkey is and remains a strong and valuable member of NATO. Democratic, strong and stable Turkey is important for our common security”.

In these words, in fact, was many things: a call to remain a democratic country, but in the end, and the recognition of the fact that Turkey, even with full prisons, prisoners, journalists and opposition members will not lose their strategic importance.

“Turkey is important for NATO, for Europe,” — said Stoltenberg. He recalls Iraq, Syria, the Black sea, “a key role in solving the immigration crisis”. But of course, it is important that the people responsible for the coup attempt were persecuted by the authorities in accordance with the rule of law.” He said it more than once. Stoltenberg does not feel fear. And is not afraid to repeat.