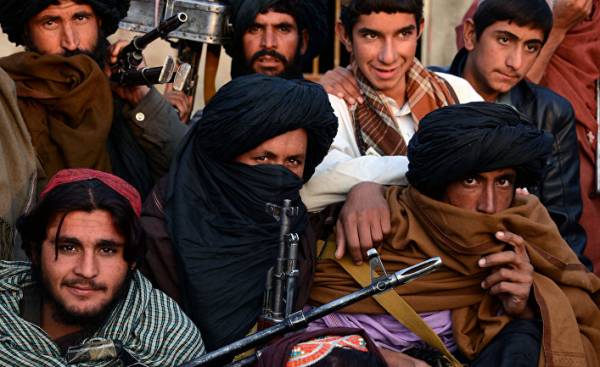 It seems that after Syria, Russia and the United States will once again converge in the struggle for influence, this time the battle fields of Afghanistan. These conclusions belong to the edition of Newsweek and appeared on its pages three weeks ago. And now advisers the White house prepared and have put on the table to Donald Trump’s proposals for strengthening American forces in Afghanistan: increase of group of 3 thousand people.

According to Javan, Donald trump during his campaign talked about the fact that, say, “the situation in Afghanistan is more stable than the situation in some small American town”, and thus as if tacitly criticized proposals to strengthen the us military presence anywhere outside the country, particularly in Afghanistan. But now, interpreting what is happening in Afghanistan, he seems to change his grades. Just a few weeks ago, the Pentagon spent in Afghanistan, the test of “most powerful” ever “non-nuclear” bomb known as MOAB. Approval of the Afghan sources, the test was destroyed 90 militants (banned in Russia — approx. ed.). But, it seems that the US if trump’s much more concerned with growing influence in Afghanistan, neighboring Russia, but not IG. The Minister of defence of the USA James Mattis in early April said that the United States is concerned about recent “Russia” in Afghanistan, in particular its contacts with the Taliban. In one of the press conferences Mattis said that the US witnessed joint activities of Russia and the Taliban. With regard to the support that the Taliban receives from Russia, it is a thing absolutely not to be questioned for the United States. And now, according to sources from the United States, trump’s advisors put on the table a new “action plan” for Afghanistan. With this plan, not everyone agrees in the United States foreign service. But clearly its ultimate goal — increase the number of American military forces in Afghanistan.

As the news Agency IRNA, citing The Washington Post: “Advisers Donald trump has provided for the Afghan war a new strategy, which again will require the United States to double its military forces in Afghanistan to increase pressure on the Taliban and force it to return to the negotiation process.” Missy Ryan (Missy Ryan) and Greg Jaffe (Greg Jaffe) writes that this strategy will completely change the whole course of the war in Afghanistan, so the United States once again with the forces that they can afford to focus for operational action in this country step by step will return to the pursuit of the Taliban. Further, the Washington Post writes that, according to the statements of American officials, this action plan is not yet approved by Donald trump, justifies the increased military presence of US in Afghanistan, and its final purpose — to force the Taliban to feel on themselves such a strong pressure that will eventually force them to agree to negotiations.

Specifically for the Pentagon

This new strategy, which has already received the support and approval of the entire Cabinet, designed exclusively for the Pentagon and nothing to do with the White House. In accordance with it before the Pentagon seeks to create in Afghanistan a powerful military group that will enjoy greater freedom in operational relationship to attack the Taliban, especially from the air. This new strategy eliminates all the limitations that were imposed by the Obama administration and which, to a certain extent deprived of the operational freedom of the us military in Afghanistan. How could previously be judged by the words and various hints of the tramp, he was not happy with the wars that led the United States outside its borders and that are “slowly tightening the country in the swamp.” However, he made it clear that he sees nothing wrong with the use of military force. Andrew Wilder (Andrew Wilder), an expert on Afghanistan at the U.S. Institute of peace, on this occasion said that the new us strategy for Afghan war implies the following: “Yes, the US really want a larger military presence in Afghanistan, but not for the purpose of final military victory, and to push this conflict to a peaceful resolution.”

The project is still resting on the Desk of the American President, already faces opposition of some senior officials of his administration. Opponents of this plan say that he repeats the Obama’s strategy, because it is intended only for “temporary use”. The opposition to this strategy within the White House have jokingly called it “the war of McMaster”. They mean Herbert McMaster, Advisor to Donald trump on national security. General McMaster once took on behalf of the U.S. commitment to fight in Afghanistan against anti-government demonstrations and at the same time was one of the “architects” to strengthen the military presence in the country during the period of George W. Bush. And now, McMaster is the Creator of the new strategy in Afghanistan. The plan provides for an increase in the number of American military forces stationed in Afghanistan, another three thousand soldiers. Thus, the total number of contingent will be increased to 8400 soldiers. The United States will also achieve a “proportional” increase of the forces and all NATO countries in Afghanistan. But since trump inclined to transfer all the initiative to making decisions to his generals, respectively the institution, which in this policy will have the last word, it is the Pentagon. Therefore, the Pentagon must decide how much effort still needs to send to Afghanistan, in what quantity and quality, and what the order of battle of all these forces will take part in combat operations.

NATO is also concerned about

Last Tuesday, a number of English-language sources reported that the North Atlantic Alliance (NATO), appealed to the British government and asked that it also put on the agenda the issue of increasing the number of NATO forces in Afghanistan. All this clearly indicates that NATO is under the influence of the United States, too, begin to worry about the growing influence of Russia in Afghanistan. The BBC on this occasion said that a few weeks ago, NATO has appealed to the UK with a request to send to Afghanistan additional. The channel on this occasion also added that it is expected that the NATO Secretary General Jens Stoltenberg next Wednesday will hold a meeting on the “Downing street” with the Prime Minister of great Britain Teresa may and will discuss with her this issue. Currently, the number of groups of the UK in Afghanistan is about 500 military focused mainly around Kabul. The total number of NATO forces in Afghanistan reaches at the moment 13 thousand troops.