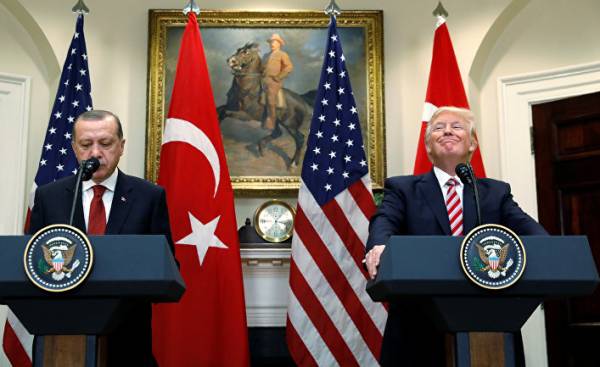 During the joint press conference of presidents Erdogan and trump in the White house scandal related to the translation of the statements made.

The text that was read Erdogan, and his translations were sometimes diametrically opposed.

“In the sphere of principled and determined fight against terrorist organizations, we hope to continue the steps that would redeem past mistakes,” said Erdogan in his speech. Thus Erdogan gave a message to the US and, indirectly hinting at the U.S. cooperation with organizations such as the people’s protection Units (YPG), warned America that it was a mistake and expressed hope for its correction.

This statement was translated as follows: “And we know that, in terms of keeping up with the principled and committed fight against the terrorists organizations all around the world, we will not repeat the mistakes of the past, and we will continue down this path together”.

That is, in the text of the English translation said that “from the point of view of the fight against terrorist organizations around the world we will not repeat the mistakes of the past, we will continue to follow this path together.”

Trump heard that the Turkish side is supposedly “admits his mistakes”, nodded approvingly, and apparently was satisfied with what was said.

The second is a translation error

The translation was the following: “Taking the YPG and PYD in the region — taking them into consideration in the region, it will never be accepted, and it is going to be against a global agreement that we have reached”.

First of all, does not use the phrase “terrorist organization”.

In addition, while Erdogan said “the perception as a party of dialogue,” the translation uses the word “consideration”, which means “taken into account”.

Given that the United States cooperate directly with YPG and PYD, the absence of the words “terrorist organization” in relation to these forces in any case should attract the attention of the American side, but nothing was said.

As you know, for many years Turkey has accused the West that it “closes eyes” on foreign jihadists infiltrating into Syria to fight against the Assad regime, and English translation of Erdogan’s words indicate that Turkey is allegedly realized this mistake and intends to fix it.

It is unclear how the occurred errors, such as Erdogan read out their statements on paper and the translator probably was also this text. Errors would be in some way understandable, if Erdogan made statements suddenly, without preparation, but the speech was prepared before the talks, and the translator was supposed to be a copy.