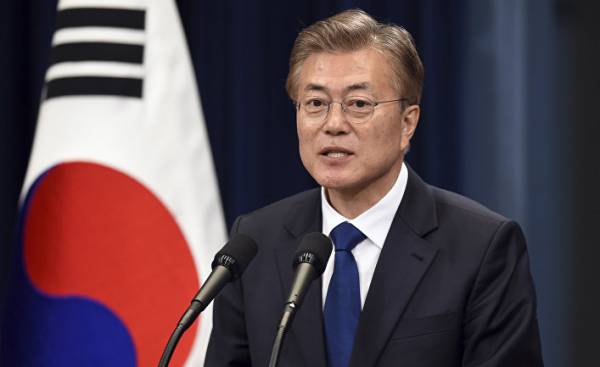 As you know, the 11th President of the Republic of Korea (ROK) ban Geun-Hye left his post as a result of impeachment, and may 9 in the country were early elections. According to surveys, no one doubts that the new President of the RK will be the democratic party candidate moon Jae-In. As during the election campaign of moon Jae-In put forward clearly different from the current policy ideas, it is possible that it will open a new page in the history of South Korea.

Moon Jae-In as a reformer and expect that he will be able to get rid of corruption and the financial oligarchy chaebol (chaebol, cor. “재벌” — a group of formally independent firms owned by certain families and under a single administrative and financial control of approx. ed.). His foreign policy ideas also became popular among voters. In particular, it offers at the same time preserving the Alliance with the United States to develop relations with China, and by easing relations with the North to resolve the nuclear issue of the DPRK.

RK is constrained by a hostile geopolitical environment in northeast Asia and throughout the Asia Pacific region, so it is extremely important to keep under control the problem of South and North on the Korean Peninsula and to maintain good relations with all powers. RK has always been advanced in the Asia-Pacific strategy of the United States, and for a long time playing this role, was able to realize a noticeable development and did not allow the US to tie their hands. At the same time she became a close partner of China and found a balance in relations between the two powers.

Military confrontation on the Peninsula continues, and RK is the decisive task is to control the situation and not to allow to break out of the present war. Roh Moo-Hyun (President of Republic of Kazakhstan from 2003 to 2008 approx. ed.) is adhered towards the North of the policy of “peace and prosperity”, and overall it was able to ease the situation on the Peninsula and create a completely new way of thinking Seoul against North Korea. Moon Jae-In was a confidant of Roh Moo-Hyun and his intention to restore the policy of “peace and prosperity” has received support among voters. Who came to power after But mun Hyun Lee Myung-Bak (President of Kazakhstan from 2008 to 2013 — approx. ed.) returned to the ROK conservative ideas, and came after him, Park Geun-Hye tried to change the situation, but soon made a 180-degree turn and went further than Lee Myung-Bak.

We cannot say that placing anti-missile complex THAAD is the biggest mistake pan Geun-Hye and the conservative South Korean government. After all, THAAD does not provide actual security of the RK, but on the contrary strikes at the geopolitical structure of northeast Asia, best South Korea. This move instantly turned friendly cooperation between Kazakhstan and China and has engaged South Korea in a strategic game against China, which does not correspond to the long-term strategic interests of South Korea.

Today in the world there is a fierce competition. Conservatives RK use Ghost security to replace the missing resources of the national development strategy. At the same time, in matters of security, they put their partner of China in the position of confrontation. As a result, the path of South Korea with each step narrowing.

No matter how prosperous state whatever it is, it will not be able to cope with such strong variations in the search strategy. South Korean conservatives greatly underestimate the risks that could bring the United States fully implement the opposite strategy. Moon Jae-In has always expressed a negative attitude to the placement of THAAD. I hope that he will be able to resolve a conflict, which brings with it the THAAD, as well as give a boost to coming from THAAD in the stalled relations between China and South Korea.

The conservative government insists on expediting the placement of THAAD, they try to make it “a fait accompli that cannot be reversed”. We hope that moon Jae-In will show their determination and wisdom, will pursue a policy that stabilizes the entire North-East Asia, resolve the DPRK nuclear issue, and will be beneficial for South Korea itself.

The current level of economic cooperation between China and the ROK mobilized accumulated between the Peninsula and mainland resources. This cooperation is essential to both parties. Last year relations between the two countries been reversed, and the location of RK THAAD missile installations, played a key role in this. At moon Jae-In, there is a desire to return to the relationship of China and the ROK on the right path, and many people want to see how this wish will be followed up with action.

Between China and the ROK does not exist the indigenous conflicts of interest. If you eliminate the major obstacles, the relations of the peoples of these countries to each other will definitely change for the better. Undoubtedly, the victory in the election, moon Jae-In will greatly affect the situation on the Korean Peninsula.